On Sunday morning, US officials discovered the bodies of four people—a 20-year-old, a young child and two babies—dead in the Texas desert on the US side of the Rio Grande, known to Latin Americans as the Rio Bravo. The Guatemalan embassy has since identified the young people as Guatemalan nationals. Temperatures in the area reached 113 degrees Sunday.

The FBI has announced it is reviewing the deaths, a highly unusual step which raises questions about whether the immigrants were murdered on the US side of the border. Regardless of the exact cause of death, the immigrants were killed by the policies of the Trump administration. 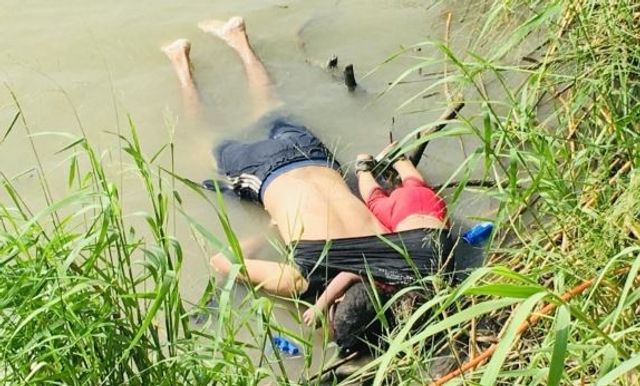 The same day, a young father and his infant daughter drowned attempting to cross the river on the border of Brownsville, Texas and Matamoros, Tamaulipas. ElSalvador.com wrote, “Sunday afternoon, a Salvadoran and his 1 year, 11-month-old daughter were overcome by the current of the Rio Bravo in Matamoros, Tamaulipas, Mexico when they attempted to cross it to enter the US.”

The father was named Óscar Alberto Martínez Ramirez, he was just 25 years old. His daughter, whose arm was draped around her father’s back when their bodies washed up on the shore, was named Valeria.

The deaths have sparked mass outrage across Latin America and engendered even deeper hatred against the Trump administration and American imperialism. Practically every major newspaper across the region ran banner headlines describing the deaths and a litany of other horrors confronting immigrants fleeing north.

Salvadorans were outraged after Mexican police assassinated a young Salvadoran woman traveling to the US along Mexico’s east coast this weekend. Elsalvador.com wrote:

“María Senaida Escobar, 19 years old, died after being shot in the head when Mexican police from Veracruz intercepted the truck in which she and other immigrants were driving to the United States.”

On Friday, Mexican National Guardsmen wielding assault rifles were filmed tearing two Nicaraguan mothers from the arms of their young daughters at the border with the US in Ciudad Juarez, Chihuahua. Photos of the National Guardsmen in battle gear frog marching the crying mothers back to Mexico was widely viewed on social media throughout Mexico and Central America and particularly in Nicaragua.

On Sunday, the administration of President Andrés Manuel López Obrador (AMLO) announced Mexico would deploy 15,000 members of the National Guard to its northern border on top of the 6,000 it deployed on the request of Donald Trump earlier this month.

The newly formed National Guard is effectively serving as Trump’s shock troops for terrorizing workers and poor peasants of Central America. Last week, AMLO—falsely upheld by so-called socialist groups like the Democratic Socialists of America as a left-wing hero—ordered bus companies to work with police and federal police to check identifications of those buying bus tickets in order to arrest and deport immigrants.

The Trump administration was forced to relocate 300 immigrant children from a concentration camp in Texas where they were being housed under filthy conditions by the fascistic guards.

The New York Times reported: “The move came days after a group of lawyers was given access to the station in Clint and said they saw children as young as 8 years old caring for infants, toddlers with no diapers, and children who said they were waking up at night because they were hungry.”

The lawyers “said that children lacked access to private bathrooms, soap, toothbrushes or toothpaste. Many were wearing the same dirty clothes that they had crossed the border in weeks earlier.”

The children were whisked off to a variety of other concentration camps, including a tent encampment outside of El Paso, Texas.

The attacks on immigrant workers escaping home countries devastated by decades of US imperialist violence have provoked outrage in the American population as well.

Beyond a small segment of die-hard Trump supporters, the masses of people regard the migrant deaths and the deterioration of conditions in the concentration camps with disgust and shame.

Over the weekend, a group of protesters gathered at the Fort Sill military base in the Midwestern state of Oklahoma, the former Japanese internment camp that the Trump administration is opening for detaining 1,400 immigrant children. The group included a number of elderly Japanese Americans who themselves were interned as young children, and one man who was born in a camp in Topaz, Utah.

Military police interrupted the protest and screamed at the former internees: “What is it you people don’t understand!” one soldier shouted, demanding the protesters leave immediately.

"My earliest recollection is being on the train with my family, leaving that camp," Satsuki Ina, a 75-year-old woman, told Newsweek. "I was two years old."

Mike Ishii, whose mother, aunts and grandmother were detained in internment camps, also travelled to Oklahoma from New York. "I am just so heartbroken and outraged," he told Newsweek.

“For me, I don't feel like I have a choice. I have to go. I need to go there. I need to register my opposition and I think that is a sentiment that is shared by a lot of people in my community. As soon as I first saw the headlines coming out about this policy to bring 1,400 children to Fort Sill, I felt like I just had to be there.”

On Saturday, Trump announced he was postponing by two weeks plans for a massive 10-city series of raids to arrest 2,000 immigrant families at the request of congressional Democratic leaders Speaker of the House Nancy Pelosi and Senate Minority Leader Charles Schumer.

The Democrats, who never raised doubts when Democratic President Barack Obama deported 3 million people, undoubtedly warned Trump that his raids would likely provoke mass demonstrations that they feared neither party could control. Now the two parties are agreeing to provide billions more to fund Trump’s American Gestapo: Immigration and Customs Enforcement and Customs and Border Protection.