Comic actor and writer Bill Hader (SNL, Documentary Now, South Park) co-produces and stars in the HBO series Barry, which follows a discharged Marine-turned-assassin as he attempts to shed the moral baggage of his military service and become an actor, with tragic and comic results. 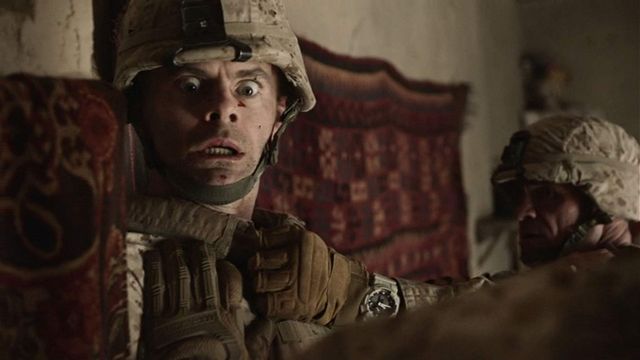 The title character Barry Berkman (Hader) is a soft-spoken, forgettable individual, who wins the esteem of his fellow Marines when he shoots and kills an Afghan from a distance of several hundred yards—an almost impossible feat of marksmanship. The show strongly implies the victim was a completely blameless civilian, guilty of “suspicious activity” and nothing else. 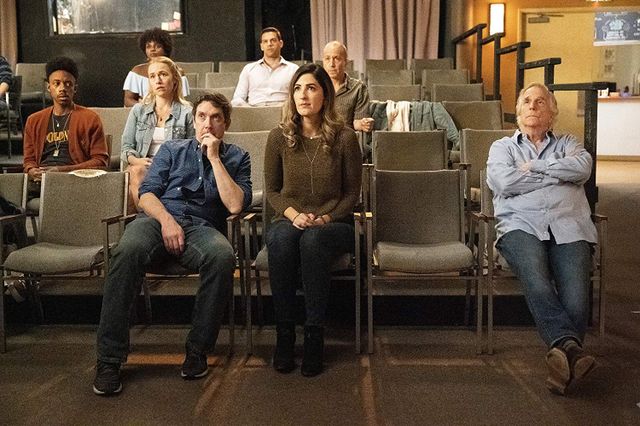 Later, when a fellow Marine is fired on and wounded, Barry pursues an innocent Afghan villager into his home, thinking he just delivered the shot in question. Barry shoots the man repeatedly in front of his screaming wife. Other soldiers from the unit restrain Barry, horrified at his misdirected and brutal act of vengeance. He is sent to an army medical facility in Germany until a family friend—one Monroe Fuches (Stephen Root, Office Space, King of the Hill )—pulls some strings to get Barry discharged back to the US. We see much of this in flashbacks.

Fuches lifts Barry out of his ensuing depression by convincing him to use his Marine skills to kill “bad guys” for hire. A fast-talking wheeler-dealer, Fuches personifies cynicism and selfishness. He leads Barry deeper and deeper into a war between multinational crime families in Los Angeles.

For a brief stint Barry feels good about killing domestic “villains,” but as Season 1 opens, his depression has returned and he hungers for a new purpose. While trailing a personal trainer he is assigned to murder for sleeping with a mob boss’ wife, Barry stumbles into a theater class and reads a scene with his target from the miserable—and of course, extremely violent—Quentin Tarantino film True Romance. Barry’s reading the scene and getting feedback from acting coach Gene Cousineau (Henry Winkler) awakens a passion for the stage.

Throwing himself into Cousineau’s self-help-style book on acting, Barry decides to give up the assassin’s life, much to the dismay of the manipulative Fuches. Barry ties himself into knots trying to escape his criminal activity, pledging to renounce killing before each of his victims turns cold. 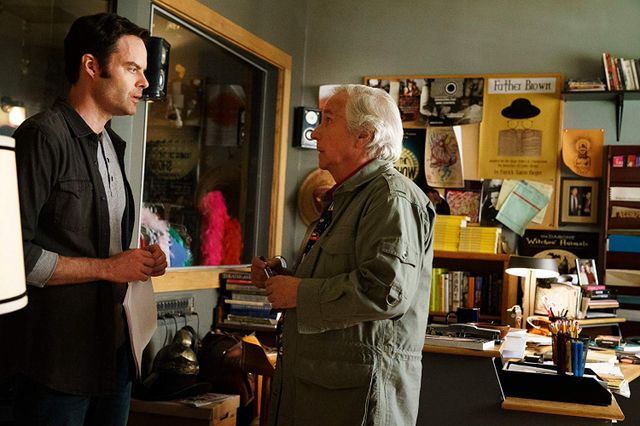 The acting class is Cousineau’s kingdom, a shrine to his enormous ego. Students bring him coffee, block off his parking space with orange hazard cones and hold a light over his script when necessary. Winkler as the aging theater guru plays off his own history as a performer (Happy Days, etc.). Cousineau used to act with the greats, we learn, including Patrick Swayze!

Cousineau speaks to the superficiality, vanity and excess of the narrow layer of overpaid figures in the entertainment world. For all his considerable flaws, however, he mentors Barry, bringing out the best in him both on stage and in life (he uses a different billing rate for the latter).

Most notable among the acting students is Sally Reed (Sarah Goldberg), Barry’s love interest. Sally has been cast in several small television parts where she invariably plays women—a submissive legal assistant, a submissive mother (who is an alien)—whom she does not respect.

Through the prism of Sally’s efforts to advance her career, we see some of Hollywood at its worse: the hot-shot actors, their agents and the invariably conformist and empty-headed producers. When Sally’s agent Lindsay (Jessy Hodges) books and fills a 400-seat auditorium for the Cousineau theater group, she confesses she guilt-tripped the entertainment elite into attendance, telling them they would be seeing a diversity showcase. It worked!

In a caustic sequence, Sally’s agency puts her in touch with a television producer, famous for the shows Divorced Women and Prison Teens. “It’s just so crazy, like, I put my art out into the universe and I’m already seeing the benefits I deserve,” she tells Barry.

A producer gives Sally the “elevator pitch,” after asserting that the “worst reason to make another TV show is to make another TV show”: “There’s three women. When we meet them they’re all in abusive relationships. They’re lost. But then over the course of the pilot they meet each other, they realize how much they have in common and they start to lean on each other.” (“Oh, that’s nice.”) “Because now there’s this sense of community, they become stronger.” (“Oh that’s great. I love that.”) “So they start a group where they kill their husbands.” (“Jesus!”) “Whether it’s slipping them something in their cocktails or blowing them and the new girlfriend up on a boat, it’s empowering.” 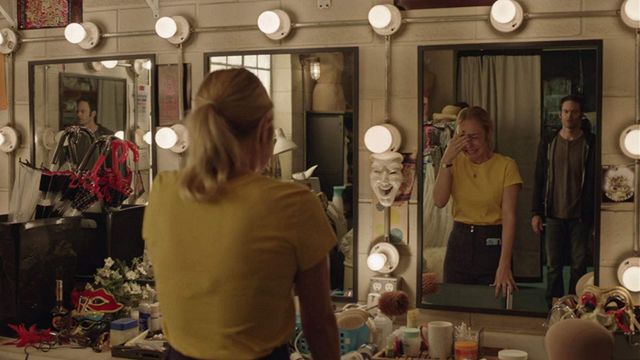 Sally becomes demoralized and disoriented at the prospect of playing a voluptuous, gun-toting lead in Payback Ladies (tagline: It’s that time of the month…for revenge.)

The other major storyline in Barry follows the aspiring actor as he attempts to navigate a war between Chechen, Bolivian and Burmese crime syndicates. The series contains some amusing material here, but in fairness, Hader and Berg seem more hostile to film and television depictions of gangsters than to these odious social types themselves. The creators clearly know more about Hollywood executives than they do about actual criminals.

Many of the scenes about Barry’s own acting career play well, owing much to Hader’s considerable acting talent. His portrayal of a deeply conflicted person comes out when he acts alongside Sally in a famous scene near the end of Macbeth. He clearly internalizes Shakespeare’s description of life as “a tale told by an idiot, full of sound and fury, signifying nothing.”

The scene brings his own homicidal deeds into sharpest relief, forcing him to consider whether he can even make a lasting change in his life or he will be drawn further and further into a violent maelstrom. 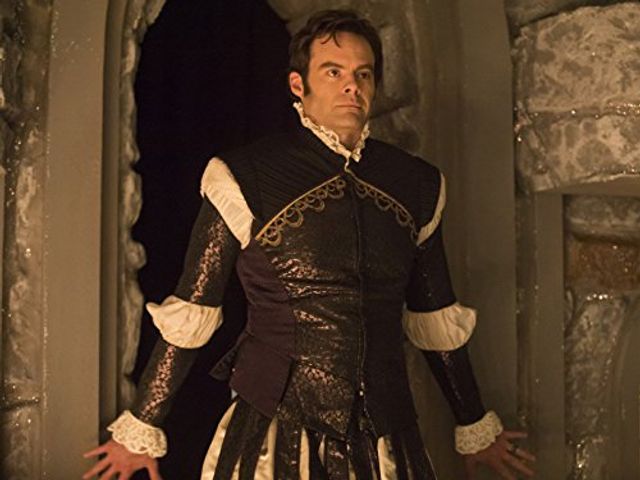 Between 2005 and 2013, Hader earned four Emmy nominations for his work on Saturday Night Live. He also appeared in a number of forgettable Judd Apatow films and voiced characters in several cartoon features.

His real potential emerged in 2015, however, when he teamed up with fellow SNL graduate Fred Armisen to create a television “mockumentary” series Documentary Now, where the duo spoof classics of the genre, including Nanook of the North (Robert Flaherty), The Thin Blue Line (Errol Morris) and Grey Gardens (Albert and David Maysles), as well as the pseudo-muckraking Vice News. In the latter episode, Hader and Armisen play imbecilic, overzealous reporters looking for a Mexican drug kingpin. At one point, Hader’s character boasts of his courage and reporting experience: “I was kicked in the head in Ukraine.”

Hader co-produces, co-writes and shares much of the directorial duty with Alec Berg, former writer for Seinfeld and a producer/director for Larry David’s Curb Your Enthusiasm and Silicon Valley.

To their credit, Hader and Berg have created a complex work that engages the viewer at a relatively high artistic and moral level. Their depiction of US Marines in Afghanistan as a deadly and dangerous force shows some insight and courage. Their skewering of the entertainment world is also a welcome development, echoing similar efforts in such series as BoJack Horseman and Party Down.

Barry has been renewed for a third season.