Hundreds of thousands of people took part in a mass rally and march in Hong Kong yesterday in defiance of a police ban and despite driving rain. The protest movement sparked by attempts by the city’s administration to pass legislation allowing extradition to China has now entered its 11th week, with no sign of subsiding.

According to the organisers, at least 1.7 million people or approximating a quarter of the city’s population took part in the protests. While the majority were young people, many other layers of the Hong Kong population took part. On Saturday, thousands of teachers held a demonstration in the city’s downtown to oppose police violence and to show their support for their students.

The protests are being driven by widespread fears that the Beijing regime is seeking to undermine the limited democratic rights that exist in Hong Kong and to intimidate critics and dissidents that use the city as a base amid a mounting social and economic crisis throughout China. Underlying the protests is mounting frustration and hostility to the city’s glaring social inequality and the absence of welfare services, affordable housing and job opportunities, especially for youth. 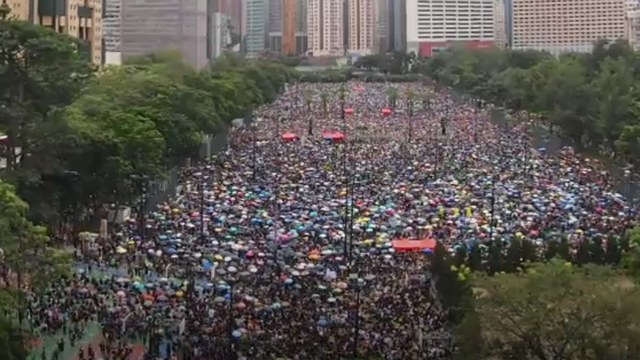 Yesterday’s rally in Victoria Park and subsequent march was called by the Civil Human Rights Front as a protest against the increasing use of police violence against demonstrators. It was titled “Stop the Police and Organised Crime from Plunging Hong Kong into Chaos.” “Organised crime” is a reference to the attacks on protesters by thugs allegedly belonging to triad gangs connected to pro-Beijing figures.

A statement issued by the Front declared: “From frontline activists, to the elderly in nursing homes, to public housing residents, Hong Kongers have faced police brutality in the forms of tear gas, bean bag rounds, and rubber bullets, which they used to disperse and arrest us. We’ve also endured non-discriminate attacks by the triads. Hong Kongers are deeply outraged and abhor the actions of the Hong Kong government and the Hong Kong police.”

The Civil Human Rights Front is closely connected to various non-government organisations (NGOs) and political parties and groups associated with the so-called pan-democrat grouping in Hong Kong’s Legislative Council. The opposition pan-democrats broadly represent layers of the ruling elite concerned at the encroachment of Beijing on their business interests.

In calling for the protest, the Front reiterated the demands for the complete withdrawal of the extradition legislation, the resignation of Carrie Lam, an independent investigation into police violence, the retraction of the designation of some protests as “riots,” and the withdrawal of all charges against protesters. More than 700 arrests have been made since early June.

The protesters are also demanding elections based on universal suffrage. The election for the Legislative Council is based on restricted electorates and reflects the methods used under British colonial rule. The “election” of the chief executive is determined by a committee dominated by Beijing appointees. Its anti-democratic character prompted the mass protests in 2014 that became known as the umbrella movement.

Yesterday’s mass protest also took place despite implicit threats from Beijing to use military force to suppress the demonstrations. The Chinese Communist Party (CCP) regime has seized on the alleged violence of protesters to denounce them as a radical fringe and to claim that their actions verge on terrorism. Last week the state-owned media features a video of paramilitary police equipped with armoured personnel carriers massing in the neighbouring city of Shenzhen.

Beijing has been pressuring Hong Kong businesses to take action against employees taking part in the protests. It also used the disruption to business and its claims of protester “violence” to promote a pro-Beijing rally on Saturday which, according to its organisers, drew in 100,000 people carrying Chinese flags and giving thumbs-up to the police.

Rallies in support of the Hong Kong protest movement also took place last weekend in a number of cities world-wide including Paris, Berlin, Toronto, Sydney and Melbourne. In some cities, pro-Beijing counter-protesters also held their own demonstrations.

The response in the Western media to yesterday’s protest in Hong Kong could be described as an audible sigh of relief, with the universal theme being praise for its non-violent character. The concern, however, is not over “violence,” the vast majority of which was the responsibility of the police. The primary fear in ruling circles internationally is that the protracted protests in Hong Kong are part of a resurgence of the working class around the world.

Two weeks ago, tens of thousands of workers, including in rail, the airport, finance and banking, and services, stopped work in the first general strike in Hong Kong for decades. The very size of the largest protests also signals widespread support among workers for the defence of basic democratic rights and hostility to police violence.

The weakness of the protest movement lies in the lack of working-class leadership and thus any fight for the political independence of the working class. The protests remain dominated by the perspective of the pan-democrats, which is seeking to limit the demands and is willing to cut a deal with the pro-Beijing administration. The general strike was not organised by the trade unions. The Confederation of Trade Unions (CTU), which is aligned with the pan-democrats, gave nominal support to the strike but did not call out the nearly 200,000 members of its affiliated unions.

The absence of a genuinely socialist leadership has also allowed anti-communist, anti-Chinese chauvinist groups, such as Hong Kong Indigenous and Civic Passion, to parade as defenders of jobs, wages and services, blaming “mainlanders” for the deterioration of living conditions. The root cause of the attacks on democratic and social rights in Hong Kong, China and internationally is the capitalist system and its abolition requires a unified fight by the working class around the world.

The building of a revolutionary party in China, including Hong Kong, requires an assimilation of the lessons of the protracted struggle of the Trotskyist movement against Stalinism in all its forms, including Maoism, which paved the way for capitalist restoration in China. That underscores the necessity of establishing a section of the International Committee of the Fourth International in Hong Kong and China.