A report published on August 19 by the United States Studies Centre (USSC) at the University of Sydney sets out the fears within the Australian establishment over the intractable economic, military and geo-political decline of their key strategic ally, US imperialism. It baldly states: “America’s military primacy in the Indo-Pacific is over.” The US, it asserts, “is struggling to meet the demands of great power competition with China and faces the uncomfortable truth that its armed forces are ill-prepared to succeed.”

The conclusion drawn by the USSC analysts is that American determination to push back Beijing’s growing influence will nevertheless intensify. The outcome, they warn, could be a full-scale war—or what it euphemistically describes as “sustained high-end conflict.” It predicts that the Chinese military would be able to use modern missile technology and other capabilities to inflict devastating losses on conventional American naval, air and land forces across most of the Pacific.

Their response, however, is to propose that Australia should therefore align even more closely with the US and deploy its own military assets to take part in aggressive operations against China.

The report is titled “Averting crisis: US defence spending, deterrence and the Indo-Pacific” and was authored by Ashley Townsend, Brendan Thomas-Noone and Matilda Steward. Their “Foreign Policy and Defence Program” is financed by the Australian Department of Defence and US-based military conglomerates’ Northrop Grumman and Thales.

Not once in the document does it even refer to the likelihood that the inability of the US military to “win” a conventional war with China would result in the use of American nuclear weapons, with catastrophic implications for the populations of China, the US and the world.

Instead, the report argues that US annual military spending in 2019 of $716 billion—which is more than the spending of China, Russia, Japan and the major European powers combined—must be dramatically increased. The authors complain that the US military has been “constrained” due to burgeoning budget deficits. They note in passing that the Trump administration’s tax handouts to the rich and corporations will only worsen the fiscal crisis by $1.9 trillion over the coming decade.

The report also bemoans the fact that the “war on terror” since 2001, and the illegal wars of aggression in Afghanistan, Iraq and Syria in particular, have cost the US some $1.8 trillion, but had “little strategic payoff.” Predictably, the think tank has nothing to say about the death and suffering that the US and its allies inflicted on tens of millions of people.

The authors favourably cite the estimate of the RAND Corporation that the US military must be allocated at least another $500 billion by 2027. However, major military spending increases, they complain, “appear politically infeasible in today’s peacetime economy with a population that is focused on other spending priorities.” It notes, with no small hint of bitterness, that “recent public opinion polling has shown that up to 70 percent of Americans support increased spending for education, veterans, infrastructure and other government programs, while current enthusiasm for higher defence spending hovers at around 40 percent.”

This is about the only, oblique reference in the report to the most significant fact of American and global politics: the unprecedented levels of social inequality and class antagonisms and the growing militancy of the struggles of the international working class, not least in the US. Workers and youth want jobs, living incomes and decent services and will not passively accept having to pay for the militarist strategic and economic conflicts that only benefit parasitic corporate oligarchies.

The response of the ruling classes internationally to the upsurge of the working class has been to push for the establishment of far-right autocratic and dictatorial regimes that dispense with even the limited democratic obstacles to militarism.

The logic of the USSC report goes in the same police-state direction. The policies that it proposes could not be implemented by the Australian government without the suppression of widespread political opposition. 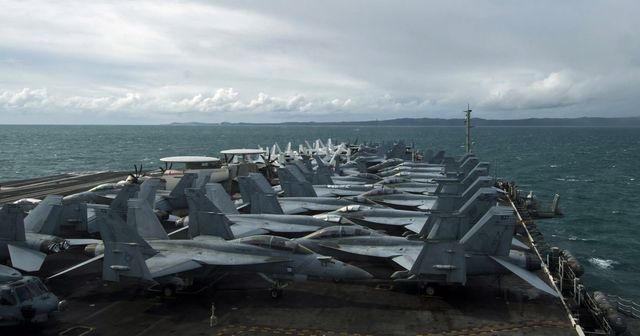 In the main section of the report, its authors unambiguously call for Australian imperialism to strengthen its alliance with the US and openly go on a war footing against China.

They write: “A strategy of collective defence is fast becoming a necessity as a way of offsetting shortfalls in America’s regional military power and holding the line against rising Chinese strength. Such a strategy would see middle powers with capable militaries—such as Australia and Japan—work alongside the United States and vulnerable regional partners to strengthen deterrence in strategically critical flashpoints like Taiwan, the East China Sea, maritime Southeast Asia and the Pacific…

“This strategy would fundamentally alter Australia’s strategic identity from that of a security contributor to frontline ally. Although it is defensive in nature it is not without risks. Joining a collective approach to deterrence and warfighting would place Australia into a more adversarial relationship with China, with the potential for severe consequences in a crisis.”

Stripping away their obtuse language, the authors are advocating that Australian military forces take part in aggressive operations in “flashpoints” close to the Chinese mainland, such as the South China Sea.

The report boasts of the role that Australia could play in the event of war on China:

“Australia’s geographic location has been described as the ‘Goldilocks zone’ in the context of a major conflict in the Indo-Pacific: Close enough to act as a regional staging post and logistics node for allied and partner forces, but far enough away from China to make it relatively difficult for the PLA [Peoples’ Liberation Army] to launch concentrated kinetic strikes on military facilities.”

This particularly points to the role it believes Australian forces could play in blocking China’s access to the key Sunda and Lombok Straits through the Indonesian archipelago into the South China Sea.

The USSC report features a map reassuringly showing that China’s medium- to short-range conventional missiles cannot even reach Australia’s northern city of Darwin—from where US forces increasingly operate. The think tank, like other proponents of the “Goldilocks” fantasy who suggest that Australia could escape unscathed from a war on China, omits to mention that nuclear-armed Intercontinental Ballistic Missiles (ICBMs), launched from either land or from submarines, could strike virtually any Australian location, including its major southern cities.

Instead, it proposes a bellicose militarist expansion that would be viewed as a provocative threat by not only China, but countries such as Indonesia.

Specific proposals in the document include:

* “[To] strategically reprioritise forces and focus operational resources on the Indo-Pacific. This requires a major rebalancing away from the Middle East.” The report spells out that this would mean a primary focus on joint exercises and actual deployments with US and Japanese forces to threaten China and rehearse for war.

* Expanding US basing arrangements and operations in Australia, presumably including for long-range B2, B1 and B52 American bombers, though it is not explicitly stated.

* Speeding up the construction and deployment of Australia’s new fleet of conventional attack submarines.

* The establishment of “stockpiles” of munitions and fuel in preparation for war.

* The acquisition of “land-based anti-ship missiles” that could “establish an independent forward defence in depth”—meaning the deployment of Australian forces to Malaysia, Singapore or Indonesia, to threaten shipping passing through the Malacca, Sunda or Lombok Straits.

* The potential acquisition of “long-range offensive strike systems.” The authors do not clarify whether they are proposing cruise missiles like the US Tomahawk or longer-range ICBMs.

* Major increases in government spending on joint military research and development with US corporations.

The authors assert that Australia has a “deep national interest” in shoring up the declining power of US imperialism and assisting its reckless militarist confrontation with China. Why is not explained, because to do so would make clear that the so-called “national interest” is the predatory interests of Australian banks and corporations that are tied to their US partners by a thousand threads.

Reports like that produced by the US Studies Centre should politically alert workers and youth to the militarist and imperialist agenda being plotted in ruling class circles. It underscores the urgency of forging a mass socialist and international movement of the working class to put an end to the capitalist profit system, and national-state divisions, before it plunges humanity into the nightmare of World War III.