“This is a prison city”

Hundreds of migrants from Africa, Asia and Haiti held four days of protests last week outside of a detention center in the southern Mexican state of Chiapas. The protests erupted over the government’s refusal to grant asylum transit visas, agreed to by Mexican President Andrés Manuel López Obrador in the service of the fascistic Donald Trump. The peaceful protests were met with a violent military crackdown.

The demonstrations took place in Tapachula, a municipality that borders Guatemala and receives half of all undocumented immigrants who travel to Mexico. Despite the fact that the majority of immigrants originate from Central America, Tapachula also receives a large number of Caribbean and African immigrants that travel through Mexico in an attempt to reach the United States. 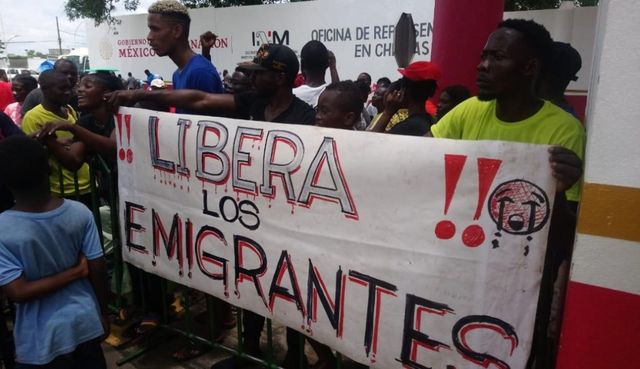 About 200 immigrants protested outside of the Siglo XXI Migration Station [Credit: @CuartoPoderMX]

In Tapachula, over 2,000 immigrants are being held in a camp titled, in the Orwellian fashion, “Twenty First Century Migration Station.” Protesters denounce that they are being denied their right to initiate proceedings to receive refugee status, or to receive a permit allowing them to travel in the country for 20 days without being detained—as is their right under Mexican law.

Instead, migrants are only being granted government permits to stay in impoverished Chiapas, where they have extremely limited economic and social opportunities. Migrants state they have been waiting for a transit visa for up to five months without even being given the possibility to fill out an application. Because the entire municipality is now being used as an open-air ward for thousands of immigrants, among the local population it has acquired the infamous name of “prison city.”

The Tapachula concentration camp is currently at more than twice its intended capacity and has already been the site of several protests this year. On August 6, a Haitian immigrant died in the Tapachula facility after being detained for 20 days. Witnesses report that he was being kept in solitary confinement despite the fact that he was sick. “The guards let him agonize all night until he died,” migrant witnesses told local nonprofit organizations.

In another harrowing account, a video of a Haitian mother at the Tapachula facility went viral on social media less than two months ago. She can be seen attempting to speak to reporters through the bottom of the facility’s fence: “Please, some food. My son is dying. Every day we do not have drinking water. Help me!”

Under these impossible conditions, caught between the Mexican National Guard and American Gestapo, immigrant workers and peasants have courageously mobilized to defend their democratic rights.

On Monday, about 200 migrants outside the facility—men, women, and children alike—took part in a sit-in demonstration to block the entrances and exits of the camp. To prevent the deportation of immigrants, protesters surrounded vans used to load and transport individuals from the facility.

The peaceful demonstrators were met with state repression on Tuesday, when soldiers from the Mexican National Guard were dispatched to forcefully remove the immigrants. The immigrants resisted the police measures and the soldiers temporarily withdrew from the facility after arresting four protesters.

Later that day, police and military engaged in retaliatory “massive raids,” according to local nonprofit People Without Borders. “Numerous members of the National Guard, wearing military uniforms, bearing large arms are roaming the center of the city, parks, and streets with immigration agents. They are taking part in what can only be called an immigrant hunt down,” stated the nonprofit.

This show of force was repeated on Wednesday with a second forceful eviction attempt. One of the demonstrators, a pregnant African woman, collapsed due to a heatstroke. She was taken to a medical facility and reportedly lost her baby.

The protests continued on Thursday with hundreds of migrants chanting “Liberty!” and “No barriers!” as they were surrounded by military in anti-riot gear. At around noon, an African migrant fell to the ground likely due to heat stroke. The protesters have vowed to continue blocking the facility until they receive their constitutionally mandated transit visas.

The horror stories outlined by the immigrants in Tapachula are being repeated across the country. Cities on the southern side of the US-Mexico border, from Tijuana in the West to Matamoros in the East, have been transformed into zones of desperation where tens of thousands of asylum seekers are indefinitely stranded.

About 58,000 immigrants are in a social and legal “no man’s land,” fleeing from their destitute and violent home countries only to be harassed, abused, and detained by Mexican authorities under the direction of US imperialism. But even those who, against all odds, are able to trickle through the system are overwhelmingly denied and deported by US immigration judges.

In the city of Tijuana, Baja California alone, about 9,900 asylum seekers are on a waiting list kept by Mexican immigration officials. On average, a mere 34 people are allowed to cross the border each day under a “metering” system implemented by the Trump administration.

The list for an asylum interview now extends into the middle of 2020. For six to nine months, these immigrants, most of them women and children, will be living in shantytowns with little to zero opportunity to earn an income or receive social services.

Even the pretense of “waiting in line” is being openly violated by the government. Mexican police and military have reportedly started to bus asylum seekers from the north to southern Mexico, leaving hundreds without the ability to attend their immigration appointments thousands of miles north.

To defend their rights, immigrants and their millions of supporters internationally must enter into an open struggle with the nation-state profit system, whose irreconcilable contradictions have produced the catastrophic wars and historic levels of social inequality from which migrants and refugees are fleeing all around the world. The answer to the militarization and anti-immigrant attacks by the ruling elites is the independent political mobilization of the working class to expropriate the ill-gotten gains of the financial aristocracy and rebuild society on the principle of equality.