Newark water crisis: The latest chapter in the capitalist poisoning of America

Newark, the largest city in New Jersey, is facing a water crisis of historic proportions, caused by a water delivery system that has been leaching lead into the drinking water of both residences and businesses. Blood tests have confirmed that a significant percentage of children in Newark have been exposed to lead, a strong neurotoxin that can cause lasting damage in even small amounts.

The exposure of Newark’s water crisis comes more than five years after officials in Flint, Michigan disconnected the city from its reliable source of treated drinking water and began drawing water from the polluted Flint River, which surged through the city’s lead-lined pipes.

On April 25, 2014, the city of Flint officially switched its water supply to the Flint River, hosting a “changeover ceremony” in which Emergency Manger Darnell Earley, Flint Mayor Dayne Walling, both Democrats, cheered and toasted the switch. 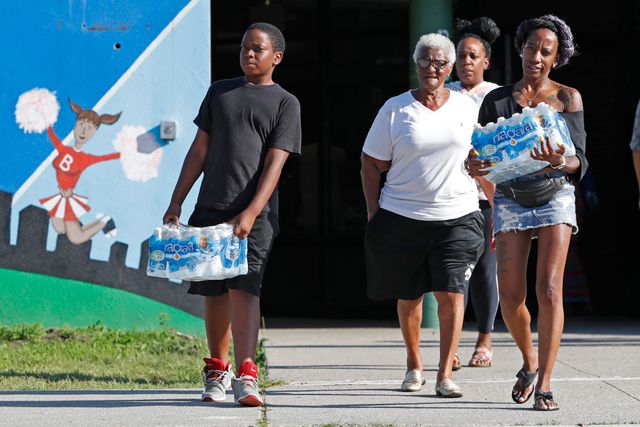 It would not be until 18 months after the switch that official lies about the safety of the water would be exposed. But the damage had already been done to Flint’s 100,000 residents, including 9,000 children. As in Flint, Newark’s population is facing the horrifying reality that they have been unwittingly subjected to lead poisoning that cannot be reversed.

Lead is a highly dangerous neurotoxin that can attack any system in the body when ingested and the damage is permanent. It can stunt growth and cause neurological damage, leading to emotional and behavioral issues and cognitive deficits, particularly among young children whose brains and bodies are developing rapidly.

A 2017 study found that the poisoning of Flint’s water supply caused as many as 276 miscarriages. The city’s population was sickened in countless other ways—with people suffering from diseases of the digestive, endocrine, renal, cardiovascular, respiratory and immune systems.

The mechanisms leading to the Flint and Newark water crises are somewhat different. In Flint, local and state officials deliberately switched the water to a polluted source, and politicians of both big-business parties criminally conspired to cover their tracks. In Newark, the problem developed over at least a decade, involving a wide-ranging cover-up in the management of the city’s water authority by city and state Democratic Party politicians.

But the catastrophes facing the two cities have this in common: In both cases, the interests of a largely working-class population, with large poverty rates, have been subjugated to the profit motives of Wall Street. 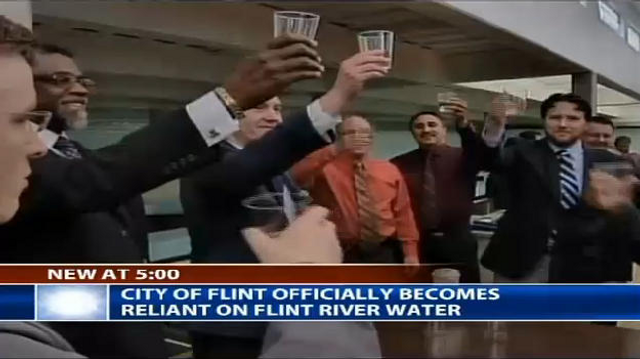 On April 25, 2014, the city of Flint officially switched its water supply to the Flint River, hosting a “changeover ceremony” in which Emergency Manger Darnell Earley, Flint Mayor Dayne Walling, both Democrats, cheered and toasted the switch. (Credit: still from WNEM-TV)

The Flint tragedy is the consequence of the drive by powerful financial interests and their political representatives to exploit the collapse of a city that had been laid to waste by deindustrialization at the hands of General Motors to plunder public assets and claw back what remains of the past social gains of workers.

New Jersey and Newark officials have known for years that the city’s infrastructure—with its 15,000 antiquated service lines, some from as early as the 19th century—was a major risk for lead contaminating the water. But they put off repairs to the pipes, citing a lack of funding. Use of chemicals—one to prevent corrosion, another to tamp down on possible carcinogens—backfired, leading to lead seeping into the water supply.

Newark Mayor Ras Baraka assured city residents that “the quality of water meets all federal and state standards,” despite test results that showed dangerous levels of lead. He chose an individual who had served four years in prison for conspiring to sell cocaine—and had no degree and no engineering background—to head the city’s water department. He pulled in a $130,000 salary.

The repeated claim of Democratic and Republican politicians that there is “no money” to fund infrastructure, healthcare, education and other vital social needs is false. Earlier this month congressional Democrats provided the critical votes to the Trump administration’s budget that includes a record $738 billion for the military. They also provided the votes to fund Trump’s detention centers that are imprisoning and abusing immigrant families and children.

However, in the case of Newark, such claims of “no money” are particularly obscene. The city is only a short train ride from Wall Street. Manhattan is home to some of the largest concentrations of billionaires in the world. The contrast between the conditions of life for the average Newark resident and the inhabitants of Manhattan’s tony Upper East Side could not be more glaring.

It should be noted that Cory Booker, now a US senator and Democratic Party presidential hopeful, served as Newark’s mayor from 2006 to 2013, when the lead crisis was festering. In 2013, a public-private agency he had overhauled, the New Watershed Conservation and Development Corporation, was wracked by a scandal in which several of the agency’s leaders skimmed money and obtained kickbacks.

A 2014 report by the New Jersey comptroller exposed abuse of public funds and lack of oversight in the department. Eight people were charged in the scandal, but although Booker came under criticism for his failure to supervise the agency, he was never implicated in the scandal.

Like the myriad candidates clogging the Democratic presidential nomination race, Booker has made promises to provide billions to combat all variety of social ills. In particular, he has touted his pro-environment stance that now comes into conflict with his having done next to nothing to head off the Newark water crisis while he served as mayor.

This is not a coincidence. Earlier this year, In These Times examined the April 15 Federal Election Commission filings of the then-leading Democratic candidates— Booker, Pete Buttigieg, Kirsten Gillibrand, Kamala Harris, Beto O’Rourke, Bernie Sanders and Elizabeth Warren—and analyzed the donations they received from employees of the six largest banks and six largest equity firms.

Of the seven, Booker was by far the candidate most favored by these 12 firms, receiving a total of $88,492 from them over that quarter. The private equity firms were the most generous to Booker, giving him a total of $49,500.

As mayor in 2010, Booker also collaborated with Facebook CEO and billionaire Mark Zuckerberg, who donated $100 million to “reform” the Newark Public Schools. These funds were later matched by other wealthy donors, bringing the total to $200 million. With these millions, the Foundation for Newark’s Future was established.

Much of the money went toward buying out the contracts of “underperforming” teachers, i.e., eliminating public school teacher positions. Some $60 million was funneled into charter schools and millions went to $1,000-a-day consultants. Zuckerberg subsequently dropped his connections with the foundation.

In his more than five years in the Senate, Booker has also collected half a million dollars from Silicon Valley and the telecommunications industry. Similar figures could be gathered about the other Democratic Party candidates, aside perhaps from Bernie Sanders and Elizabeth Warren, who have pledged not to gather funds at high-dollar fundraisers in an attempt to save face for the Democrats as a party of ordinary people.

The Newark water crisis is not an aberration. Experts estimate that there are at least 3,000 communities with water with lead poisoning rivaling those of Flint and Newark. The 2017 report card from the American Society of Civil Engineers’ assigns a D+ grade for the United States infrastructure as a whole.

The engineering group notes that of the 1 million miles of pipes delivering water across the US, many were laid in the early to mid-20th century, with a lifespan of 75 to 100 years. According to the American Water Works Association, $1 trillion is necessary to maintain and expand service to meet demands over the next 25 years to potentially avert and reverse the type of lead poisoning plaguing Flint, Newark and towns and cities across the country.

Although $1 trillion is a drop in the bucket compared to the wealth of the financial elite in America, these funds will not be freed up to confront the water crisis or other infrastructure repairs—for roads, bridges, dams, hazardous waste, transit and other vital needs of the population.

The Flint, and now Newark, disasters demonstrate the incompatibility between private ownership and control of the means of production and fulfilling the most basic needs of the vast majority of the population. The Socialist Equality Party fights to unite and mobilize workers and youth in opposition to all of the parties and politicians of the ruling class, to put an end to capitalism and establish a socialist society based on social equality and the satisfaction of social need, not the greed of Wall Street speculators.