MATE workers established the union in order to fight low wages, harsh working conditions and sub-standard food at the plant’s canteen. The company is the largest supplier of moulded parts, assemblies and modules to India’s domestic automotive industry.

Company management refuses to legally recognise the union, which is affiliated to the All India Central Council of Trade Unions (AICCTU), a federation controlled by the Maoist Communist Party of India-Marxist Leninist-Liberation or CPI-ML-Liberation. 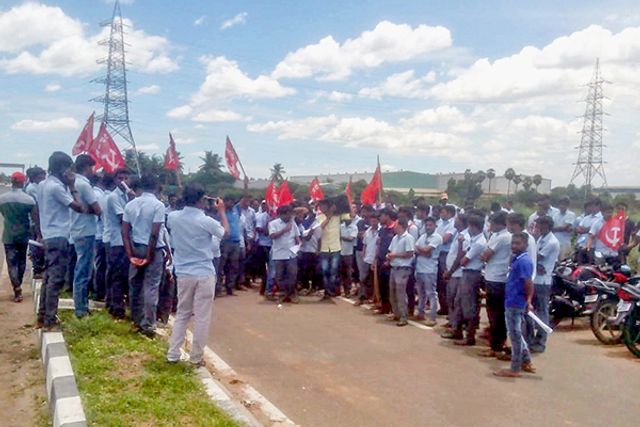 Part of a demonstration

MATE is located in Pondur village and is part of the Oragadam Special Economic Zone, 40 km from Chennai, capital of Tamil Nadu state. It employs just over 2,000 workers but only 568 are permanent employees. Another 1,000 workers are employed on contract and 500 trainees work under a government-sponsored program.

Permanent employees are only paid 11,500 rupees ($US160) per month with contract workers receiving 10,500 rupees. Only 40 of the 450 female workers employed at the plant have been made permanent.

MATE, which is the polymer division of Motherson Sumi Systems Ltd (MSSL), was established in 1986 as a joint venture between Samvardhana Motherson Group (SMG) and Japan-based Sumitomo Wiring Systems. Apart from India, it operates in 42 countries, employing over 135,000 workers, and in 2018 had a turnover of $US11.7 billion.

On July 31, the company laid off all those who joined the new union and demanded that they sign a pledge stating they would not join any union. A majority of workers rejected this anti-democratic attack and held a two-day sit-down strike in protest.

Following a union appeal, Tamil Nadu’s labour commissioner “advised” the company to allow the protesting employees to resume work and that they not be hit with any punitive measures.

While MATE pretended to heed the labour commissioner’s advice, it refused to recognise union representatives and attempted to intimidate workers. Company managers phoned workers’ parents and told them that their sons and daughters risked losing their jobs for striking against the company. Anger over these provocations compelled the union to organise the indefinite walkout on August 26. 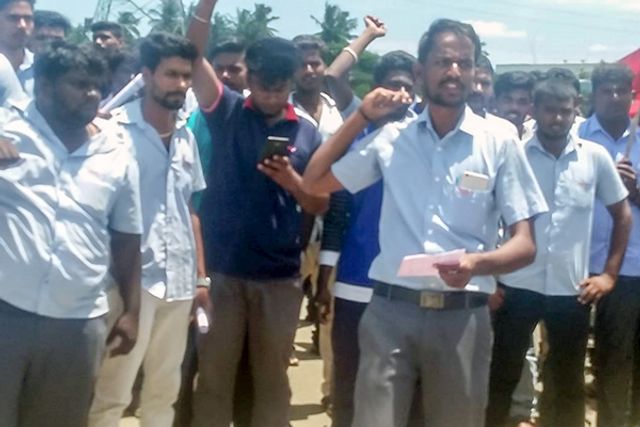 The AICCTU has responded by calling on the Tamil Nadu government to move against MATE management for “disrespecting the country’s labour laws.”

In June, the AIADMK effectively banned all strikes in the auto component industry by declaring the industry a “public utility service.” While the Madras (Chennai) High Court issued an interim order on August 1 which temporarily halted this anti-democratic measure, the threat remains that this law will be re-imposed.

AICCTU leader Rajaguru has denounced management for recruiting poor workers from other Indian states, such as Assam, Odisha and Andhra Pradesh to “maintain production” and called on the AIADMK government to force the company to stop this recruitment.

Rajaguru’s calls are aimed at dividing workers and diverting attention from the union federation’s refusal to mobilise MATE contract workers, trainees and associates at the plant, or their fellow workers in Tamil Nadu and anywhere else in India.

The AICCTU and the CPI-ML-Liberation, which is in the orbit of the Stalinist Left Front led by the Communist Party of India (Marxist), defends auto industry profits and has no intention of mobilising working-class support. The Maoist group formed an electoral bloc with the big business Congress Party in Bihar state and pledged to assist in forming an alternative government.

MATE auto-parts workers must study the lessons of the struggle waged by Maruti-Suzuki car assembly plant workers in Manesar, Haryana state. Maruti Suzuki workers established their own union in 2011–12 and waged a determined struggle involving walkouts and sit-down strikes against the Japanese-owned transnational.

The corporation and local authorities responded by launching a violent provocation in July 2012, which led to the arrest of hundreds and the sacking of thousands of workers at the plant.

In March 2017, 13 workers, including all 12 members of the union executive committee, were convicted on trumped-up murder charges and sentenced to life imprisonment.

The Indian auto industry, like its global counterparts, faces a mounting crisis. Automotive Component Manufacturers Association spokesman Vinnie Mehta said industry is in a “recessionary phase.” On August 7, Reuters reported that Indian automakers, part manufacturers and dealers have retrenched about 350,000 workers, most of these contract and temporary employees, since April.

Striking MATE workers can only fight the company’s attacks and defend their jobs and conditions by breaking from the Stalinist-controlled, pro-capitalist unions, establishing their own rank-and-file committees, and fighting to mobilise autoworkers throughout India and around the world on a socialist and international program.

WSWS reporters spoke to striking MATE workers last month, discussing the deepening global assault on auto-industry corporations, and the international campaign conducted by the Socialist Equality Party in the US among auto-workers who have overwhelmingly voted to strike for higher wages and improved conditions. 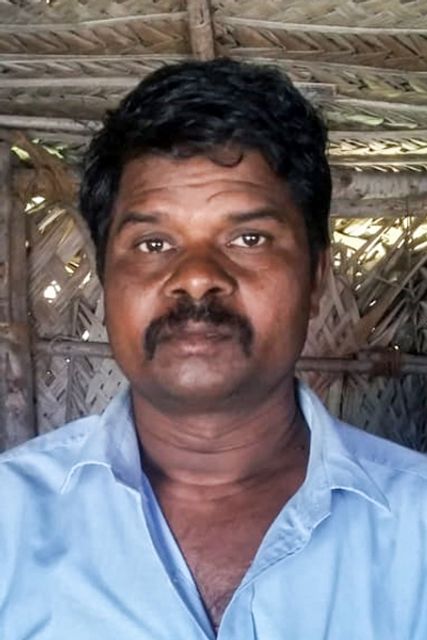 V. Balakrishnan, 44 explained that he had worked for MATE for 12 years but that his salary remains at a meagre 11,500 rupees per month. He has to travel from Sholinger village each day and is spending 3,500 rupees each month on transport. His monthly rent is 2,000 rupees.

“I cannot afford to buy standard rice and so our family has to live on sub-standard ration rice [provided by the government at lower prices] every day,” he said. Balakrishnan does not have a gas burner or any other proper cooking appliances at home.

“I was finding it so extremely difficult to maintain my family financially that I attempted suicide in front of the Sriperumbudur local government office,” he said.

Balakrishnan said the union had not called on contract workers to join the strike because this “will risk their jobs.”

In fact, the union is not just isolating the striking permanent workers but accepts the contract employment system now used to employ many workers in Tamil Nadu and across India. Balakrishnan told the WSWS he would raise this issue with the union and said that he agreed that a genuine socialist strategy, based on the united struggles of the international working class, was needed. 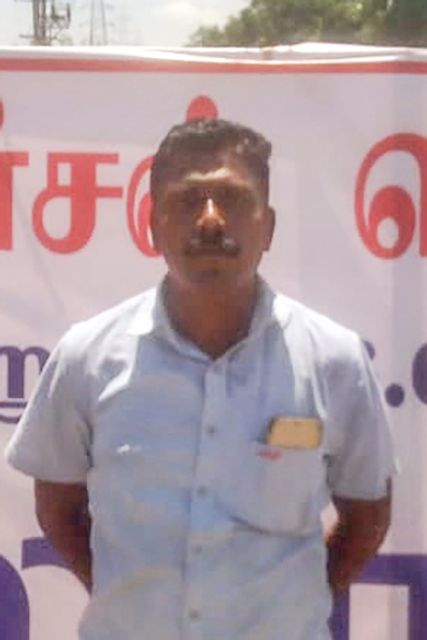 Thiyagarajan, 39, was suspended for his involvement in union activities and for fighting for workers’ demands. He joined the company in 2010 but had not received a wage increase for almost a decade.

“Workers are also deprived of many basic benefits,” he said. “It was because of our worsening conditions that we decided to form a union and fight for our demands. The company issued a suspension letter to me on August 24, accusing ‘indiscipline,’ but I refused to accept it.”

Thiyagarajan said he fully supported a globally functioning world party of the workers, such as the International Committee of the Fourth International. “If you can take up our fight globally, I’d like to collaborate.” 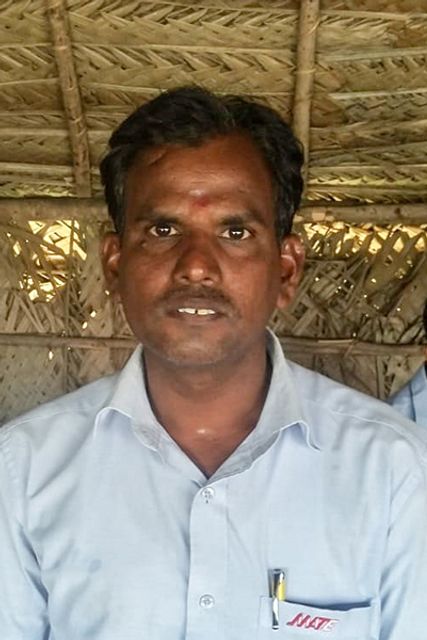 Palani, another Motherson worker, spoke about the rapidly declining living standards of the workers at the company. “A permanent worker in most of the car components companies in the surrounding areas gets a monthly salary of at least 25,000 rupees. I’ve been working for this company for 14 years but my salary is still 11,000 rupees…

“Most of the contract workers toil for 12 hours, with an extra four hours compulsory overtime work. The vast majority of contract workers come from North India. They’re not entitled to receive [PF and ESI] pension funds. I think it’s important that both permanent and contract worker join in this struggle and to broaden it.

“As a worker I would give my support to the US auto workers’ struggle. I agree the only viable program is to fight for the united struggles of the workers all over the world.”