The Trump administration has gone ahead with its decision to impose a 15 percent tariff on $110 billion worth of Chinese goods in one of the most significant escalations of the trade war that has now lasted more than a year.

The new tariffs came into effect yesterday and will impact on a range of consumer products from footwear and clothing to certain technology products. The 15 percent tariff hike is set to be extended to a further $160 billion worth of Chinese goods from December 15, with the prospect that the rate could also increase.

The US has already imposed tariffs on $250 billion worth of Chinese goods, mainly business products, and these are set to rise to 30 percent in a month’s time.

The new tariffs will directly impact on consumers. Myron Brilliant, head of international affairs at the US Chamber of Commerce, said the administration was using the wrong tactic against China and the tariffs would cost every American household between $600 and $1,000 by the end of the year. 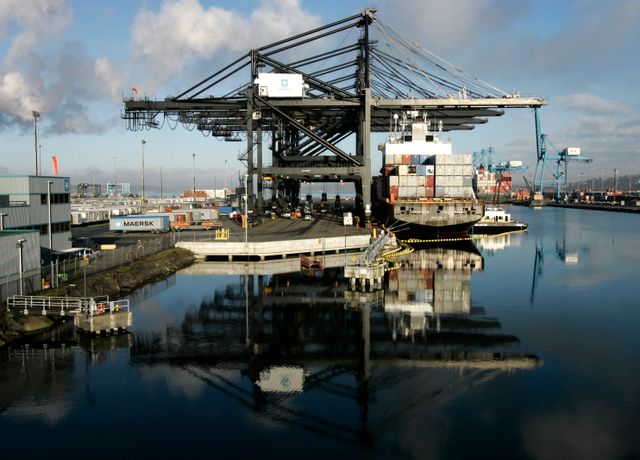 A container ship from Horizon Lines Inc. is unloaded at the Port of Tacoma Wednesday, Feb. 13, 2008, in Tacoma, Wash. (AP Photo/Ted S. Warren)

In a calculation made in May, the New York Federal Reserve estimated that tariffs imposed on Chinese imports were already costing the average American household $831 a year because of their direct effect on prices and their impact on economic efficiency.

China put into effect retaliatory measures yesterday which will hit $3.2 billion worth of US soybean exports, $2.55 billion worth of crude oil and $1.16 billion of pharmaceutical products. China has targeted a total of $75 billion worth of American goods, mainly agricultural products, in order to try to hit at states that provide the main base of Trump’s political support in the South and the Midwest.

A commentary published in the official Xinhua news agency after the tariffs went into effect indicated Beijing considers there is no prospect for a solution to the conflict and it is ready for a long battle.

“China’s determination to fight against the US economic warmongering has only grown stronger and its countermeasures more resolute, measured and targeted,” it stated. One thing that “White House tariff men should learn is that the Chinese economy is strong and resilient enough to resist the pressure brought about in the ongoing trade war.”

The official position on both sides is that face-to-face talks will be held sometime this month. Trump told reporters on Saturday that the scheduled talks were still on, “as of now.”

China has yet to confirm that negotiations will resume with the commerce ministry saying the two sides were still discussing whether a delegation from Beijing would travel to Washington.

On the sidelines of the G7 meeting last weekend Trump claimed there had been a call from a top Beijing official, and China was eager for talks to resume and to make a deal. But the Chinese side denied all knowledge of such a call.

Even if talks are held, it is doubtful whether any progress will be made in resolving the conflict.

China’s foreign ministry spokesman Geng Shuang said the trade teams on both sides maintained effective communication. “We hope the US side can demonstrate good faith and take real action, to work in concert with the Chinese side, to find a solution to the problem on the basis of equality and mutual respect.”

As far as Beijing is concerned that means some pullback on the tariff measures imposed by the Trump administration.

“What should be discussed now is that the US must call off its plan to impose [additional] tariffs on $550 billion worth of Chinese goods to avoid a further escalation in the trade dispute,” commerce ministry spokesman Gao Feng said.

However, there are no indications of that taking place. The Trump administration fears that if it makes any move in that direction it will come under attack from anti-China hawks in both the Republican and Democratic parties. They maintain that Chinese economic expansion, especially in high-tech areas, is an existential threat to the “national security” of the US and must be prevented at all costs.

The imposition of the tariff brought a series of calls from US business representatives for some resolution of the conflict, amid warnings that the trade war could bring about a recession.

The president of the Consumer Technology Association, Gary Shapiro, said the use of tariffs to try to pressure China had backfired.

“US companies have to spend more resources on constantly changing trade rules and less on innovation, new products and our economic health. This is not how you reach a meaningful trade agreement,” he said.

Trump has received backing from the trade union bureaucracy. In an interview with Fox News, AFL-CIO president Richard Trumka credited Trump with “taking on China” but expressed the criticism, common in US political and business circles, that “unfortunately he’s done it in the wrong way.”

“To take on China, there has to be a multilateral approach,” Trumka said.

Trump, who last week “hereby ordered” US businesses to leave China, citing national security legislation, has dismissed criticism from business organisations that the trade war is having an adverse impact on the US economy.

The US president said any business setbacks were the fault of “badly run and weak companies” and that the US Federal Reserve was to blame. The US did not “have a tariff problem … we have a Fed problem.”

Trump is demanding that the Fed ease monetary policy, both through cuts in interest rates, and even a resumption of asset purchases—the policy of so-called “quantitative easing”—in order to bring down the value of the dollar and improve the position of the US in global markets.

The increasing push by the administration towards what amounts to a currency war is taking place amid increasing signs of a significant slowdown in the world economy. Germany, the leading economy in the euro zone, is on the brink of recording two successive quarters of negative growth and the UK economy contracted in the last quarter.

In China the manufacturing purchasing managers’ index stood at 49.5 in August, up from 48.7 in July. This was the fourth month in a row that the index had come in below the level of 50, which marks the border between expansion and contraction.

While Trump continues to insist that the US economy is strong, there are indications of a downturn. The University of Michigan’s index of consumer confidence, released on Friday, posted its largest monthly drop since 2012, with about a third of those surveyed pointing to tariffs as a concern.

“The data indicate that the erosion of consumer confidence due to tariff policies is well under way,” said the survey’s chief economist Richard Curtin.

Long-time economic forecaster Allen Sinai told the Wall Street Journal that a fall in corporate earnings could lead to less investment and a contraction. Business investment fell at an annual rate of 0.6 percent in the second quarter after reaching growth rates of more than 8 percent at the end of 2017 and at the beginning of 2018.

Sinai said that China had to be confronted, but the trade measures were a “big policy error” and were hurting at home.

According to the forecasting firm Macroeconomic Advisers, the US economy is growing at an annual rate of 1.7 percent in the current quarter, well below the Trump administration’s target of at least 3 percent.