The epidemic of nurse suicides and the US healthcare crisis

“I’m a victim of burnout and PTSD … I’ve been crying all morning coming from a pain so deeply pressed and locked inside me. I watched my last patient die three days ago and leave in his wake a broken family truly taken to the depths of misery and suffering” —“My Burnout Story,” allnurses.com

These words were written by a cardiovascular intensive care unit nurse (CVICU RN) who had six years’ experience at the time and had quit “due to the experiences, death and suffering in particular” endured on the job. This nurse’s story is not unique.

There are 3.9 million registered and licensed practical nurses in the United States. A 2014 study of 3,300 nurses found that many were stressed and overworked—a majority reported eating poorly and rarely getting a decent night’s rest. 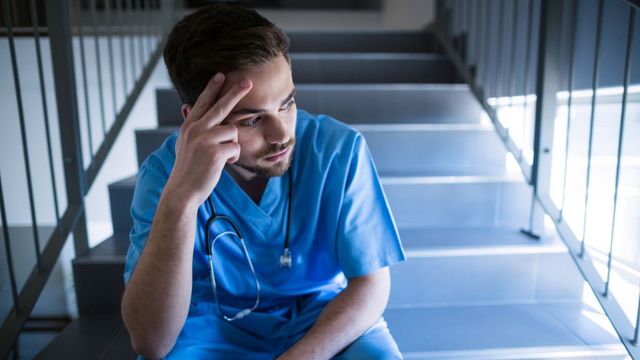 New studies show that nurse suicides are reaching epidemic proportions, as the mental health strain on these health care workers is driving increasing numbers of them to take their own lives. [Credit: Wavebreakmedia for Getty Images, via Canva Pro]

These and other workplace conditions—including violence, management bullying and the emotional burden of patient care—are leading to a growing epidemic of nurse suicides. Researchers at the University of California San Diego (UCSD) School of Medicine have conducted the first national investigation of nurse suicides in more than 20 years, and the results are alarming.

The UCSD researchers found that the suicide incidence among nurses was significantly higher than in the general population. For female nurses, the incidence of suicide was 11.97 per 100,000; for male nurses it was more than three times that rate, at 39.8 per 100,000.

What accounts for this tragic toll? How is it that a sizeable number of individuals who have trained and chosen a field in healthcare are suffering from physical and mental healthcare crises to the extent that they are taking their own lives?

The World Socialist Web Site’s recent article on nurse suicides has been one of our most widely read articles. This topic has struck a nerve with healthcare workers as well as our broader readership. A follow-up interview with nurse scientist Judy Davidson, RN, DNP, one of the UCSD researchers, prompted a stream of comments, including the following from two nurses:

Craig: “We are conditioned to put our own needs aside. This promotes a culture of nurses who hide any emotional or physical problems. Rather than dealing with our issues, we stuff them back into ourselves until we can no longer hold any more. Like a garbage can that needs to be emptied, but instead just keeps getting more and more compacted until it explodes.” …

Kathy: “Look into DEPRESSION of nurses. Disregarded by management and forced to work day after day in short staffing situations will destroy your spirit. I’m a registered nurse for 39 years. It used to be a rare shift where you would have to work shorthanded. Now it’s a rare shift when staffing is up to par.” …

And this from a reader who is not a nurse:

Clara: “Nothing better than a good nurse when you’re sick or someone you love is sick. They should be valued and treated well. They should have decent wages, decent hours of work and show gratitude for staying on the job.”

But the healthcare system in America is working against everything this last commenter says is needed. Patients are continually added to nurses’ loads. The frenzied pace, overwork and rising patient-nurse ratios are leading to nurse burnout and low retention rates for nurses and other healthcare workers. Nurses are expected to do more work for no increase in pay—or even pay cuts—and attacks on benefits, including their own healthcare.

Nurses and support staff struck in May at Mercy Health St. Vincent hospital in Toledo, Ohio, over pay, staffing and forced overtime that they said undermined patient care. During the strike, nurses told the WSWS that they had been forced to work up to 26 hours consecutively and some had to sleep in their cars before they could drive home safely. Patient-to-nurse ratios had increased, actually doubling over the course of a year.

Despite receiving widespread support in the community, including support from autoworkers at the nearby Fiat Chrysler Jeep complex, their six-week-long strike was betrayed, and the strike ended with a rotten deal that differs little from Mercy Health’s original offer.

The United Auto Workers, which represents the nurses and other hospital staff, sent the support staff back to work in June and forced the nurses back a month later despite their overwhelming vote earlier to reject a contract. Hundreds of workers have either resigned from the UAW in disgust or quit their jobs following their blatant betrayal by the union.

While some hospitals in the US are nominally “nonprofit,” the entire healthcare system is geared toward enriching the hospital executives, insurance CEOs and pharmaceutical companies. Dr. David Torchiana earned total compensation of $4.7 million in his first year on the job in 2016 as the CEO of Partners HealthCare, the largest “nonprofit” health system in Massachusetts.

Such obscene profits cannot simply be attributed to the personal greed of these executives, although this is certainly a factor. The vast and growing social inequality in the US is an intrinsic feature of the capitalist mode of production, in which the vast majority of workers sell their ability to work to the capitalist class, taking home a fraction of the value they produce.

The conditions in hospitals and clinics are working against both nurses’ mental well-being and the ability of doctors, nurses and other healthcare staff to provide patients with high-quality, attentive patient care. The for-profit healthcare system in America is driven by the principle of squeezing out the most profit possible from its operations. The lives and health of both healthcare workers and patients are subordinated to these profits.

More than 150,000 Americans died from alcohol and drug-induced fatalities and suicide in 2017, the latest year of the CDC’s complete figures. This is more than twice as many as in 1999 and the highest number since recordkeeping began in that year.

This skyrocketing rate of “deaths of despair”—which includes record numbers of deaths from opioid overdoses—is emblematic of a society that is sick in both a literal and figurative sense. Life expectancy in the US, a barometer of the health of a society, has fallen for the last three years.

Nurses, along with the vast majority of healthcare professionals, enter the nursing field with the desire to make a positive difference in the health and lives of their patients. The tragic rise of nurse suicides is a result of the intersection of the lives and labor of this workforce with the brutality of the capitalist system, which values profit above advances in medical science, drug development to fight disease, and the health of the population.

Socialized healthcare will not be realized through the policies of Democrats like Bernie Sanders, who promise the moon but have no intention of ending the capitalist system and expropriating the giant healthcare chains, and the health insurance and drug industries.

The epidemic of nurse suicides points to the urgent need for healthcare workers—and the population as a whole—to fight for a socialist solution to the healthcare crisis in America. Healthcare administration must be taken out of the hands of the oligarchy that profits from the rationing of care and the exploitation of healthcare workers, as part of the socialist transformation of society.