When Fiat Chrysler Automobiles (FCA) announced last February that it planned to invest $4.5 billion in Southeast Michigan—including the construction of the first new auto assembly plant in Detroit in decades—the corporate media, local Democratic Party politicians and the United Auto Workers (UAW) celebrated the auto company’s decision as “transformative” for the city.

In reality, six years after the Chapter 9 bankruptcy of the City of Detroit, in which the city’s resources were looted to pay off its wealthy creditors, the ruling class is once again pilfering from the city treasury. 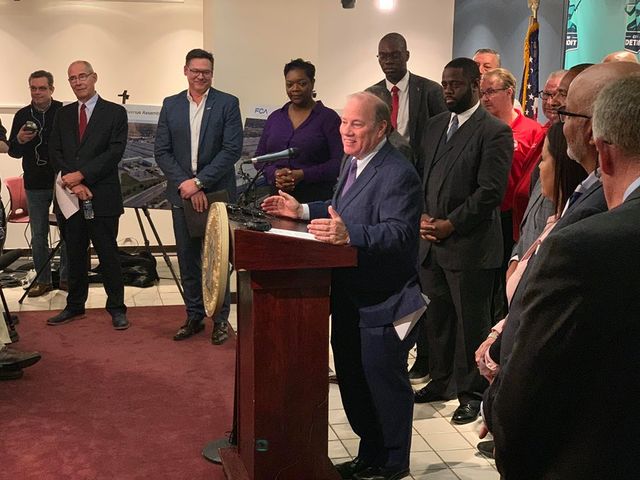 The focus of the promotion of FCA’s investment plan has been the creation of 6,500 new auto jobs in the Detroit Metro area. Speaking at a press conference at the time next to Michigan Governor Gretchen Whitmer, Detroit Mayor Mike Duggan said, “This is the way the city of Detroit fights unemployment and poverty.” UAW Vice President for FCA Cindy Estrada also hailed the announcement, saying, “This is especially exciting given that these are good union jobs with union wages and benefits that have been collectively bargained for with the company.”

By “good union jobs,” Estrada—who has been implicated in the widening federal bribery investigation into the UAW—is referring to second-tier workers earning a starting wage of $17 per hour who will reportedly constitute the vast majority of new hires. This new low-paid, highly exploited workforce will nonetheless be a boondoggle for the union, which will pump as much as $5 million per year in union dues from the new hires while enforcing the dictates of management.

In reality, FCA is making a commitment to Detroit because it believes that it can find lower labor costs in the economically devastated former Motor City. Instead of selecting other candidate cities in Illinois and Mexico, FCA picked Detroit because it is confident that it will earn many multiples of its investment through the increased exploitation of the city’s working-class population.

FCA’s investment plan hinges on the package of incentives provided to the global automaker by Whitmer, Duggan and the Democrats on the Detroit City Council. According to a recent report in Crain’ s Detroit Business, the combined tax and land deal cut will likely add up to approximately one tenth of the company’s $4.5 billion investment. 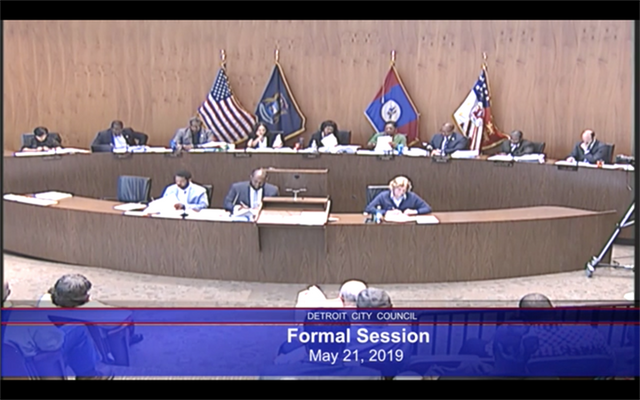 Crain’s reports: “FCA’s tax incentives now total $384.5 million and could climb to as high as $422 million if the Michigan Department of Environment, Great Lakes, and Energy approves an additional $37.83 million in tax increment financing.”

The complicated details of the package were concealed from the public and rushed through the Michigan Strategic Fund (MSF) board and the Detroit City Council in May. The entire process took less than 90 days. The provisions of the deal include tax breaks, free land, real estate swaps with other property owners, loans for site preparation, payroll tax recapture and cash grants.

There is a bitter irony that, in the name of “revitalizing” Detroit, the Democrats are turning over significant public resources to one of the very auto companies responsible for the collapse of the city’s tax base over the last 50 years.

Up until the 1970s, when the US auto industry began its prolonged decline, Chrysler Corporation—the forerunner of FCA—had a significant number of automotive plants on the east side of Detroit. The tens of thousands of workers in these factories were among the most militant sections of the American working class.

When Chrysler entered its first bankruptcy and government bailout in 1979, the company targeted these plants for shutdown. They were aided by UAW President Douglas Fraser, who joined the Chrysler Board of Directors at the invitation of CEO Lee Iacocca. 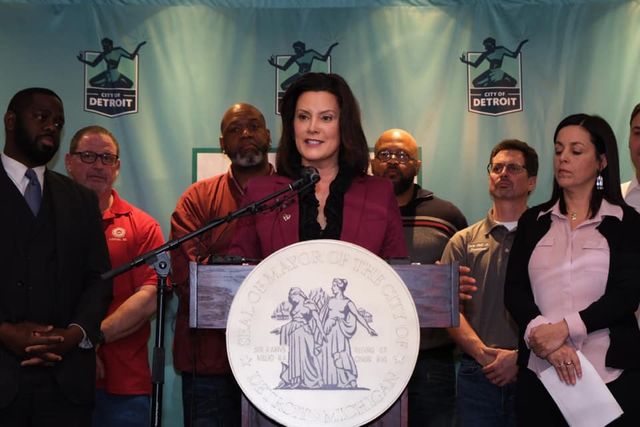 One after another, between the 1980s and the 2010s—Dodge Main (1980), Lynch Road Assembly (1980), Jefferson Assembly (1990), Mound Road Engine (2002), Detroit/Eldon Axle (2010) and Conner Avenue Assembly (2017)—factories were shut down and, in some cases, demolished in order to erase the memory of these facilities. Huge swaths of Detroit’s east side were left with industrial contamination and in ruins.

A large portion of the land being given to FCA is the site of the original Mack Avenue Plant, which Chrysler shut down in 1979, leaving the property a derelict and toxic wasteland. The Democrats in Detroit, Wayne County and Lansing have not only turned this real estate back over to FCA at no charge, but have also provided the financial resources needed to clean it up for the new Mack Avenue Assembly Plant now under construction.

The land deal involved a particularly sordid exchange involving the hiving off of city property to land speculators. In order for the city to grant FCA the contiguous parcels of land needed for the construction of the new Mack Avenue Assembly Plant, it had to purchase 214.6 acres from existing property owners at a cost of $50 million.

The city obtained the largest parcel, consisting of 82.2 acres located at the former Budd Wheel Plant at Conner and Mack Avenues, through a swap of 117 acres of city-owned property plus $43.5 million in cash with Crown Enterprises, the real estate company owned by Detroit billionaire Manuel “Matty” Moroun.

The city acquired an additional 8.5 acres of land, to be turned over to FCA for parking lots, through an exchange with Soave Fodale Group & Associates for 30 acres of residential property at Van Dyke Street and Lynch Road. Anthony Soave—a longstanding financial supporter of Mayor Duggan—allegedly purchased the land several months before the FCA deal was announced, flipping it back to the city for four to five times the value of the original purchase. 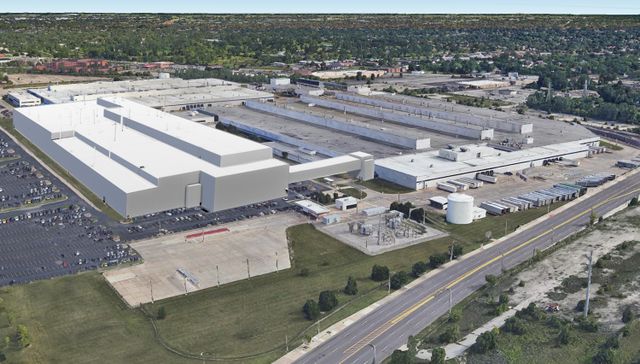 In order to deflect public opposition and grease the palms of the UAW and various pro-Democratic Party groups, the deal establishes a $35 million Community Benefits Agreement (CBA). The CBA is overseen by a nine-member Neighborhood Advisory Council (NAC), which, in the case of the FCA deal, is made up of UAW officials and community activists tied with local Democrats.

Through the CBA, a fraction of the total value of the deal will be spent on workforce, education and youth development and community revitalization funding in the immediate vicinity of the new factory, while the rest of the neighborhoods in the east side are left in decay. Much like what global corporations have done in the “special economic zones” of Mexico and Southeast Asia, FCA and the Democrats are planning to paint a picture of an oasis of prosperity completely isolated from the general poverty and urban destruction that surrounds it.

This, however, assumes that the money actually reaches the projects for which they are earmarked. The CBA has no enforcement mechanisms, and FCA is not obligated to follow through on any of the promises that have been made.

Moreover, the “final benefit package,” unveiled at UAW hosted meetings run by FCA representatives, will be two-thirds funded by the city.

Democrats such as US Rep. Rashida Tlaib and City Council member Mary Sheffield promoted the smokescreen of the CBA process. However, in typical fashion, when details of the land deal and tax incentives were made public, they claimed they had been deceived and that real estate billionaires were stealing public land.

Workers in Detroit have a long and bitter experience with similar development schemes, all of which were falsely justified in the name of jobs and economic growth. In 1980, when GM demanded land to build its Detroit-Hamtramck Assembly Plant, the city government evicted residents of the Poletown community from their homes using eminent domain. That plant is currently scheduled by GM to close permanently in January 2020.

In the midst of the Detroit bankruptcy, when the city claimed that it had no money to pay the pensions of city employees, the Detroit CBO process was used to hand the Ilitch family empire $650 million—including a majority of the District Detroit real estate of 50 blocks of downtown property—to build its Little Caesars Arena for the Detroit Red Wings hockey and Detroit Pistons basketball teams.

In 2014, Ilitch Holdings presented city residents in the downtown Neighborhood Advisory Committee with an elaborate proposal that included “mixed use” development of restaurants, cafes, apartment buildings and retail shops to justify the city’s handout to the Little Caesars corporate empire. As of this time, not a single one of these “community benefits” proposals have even been started, much less completed.