The legacy of Syriza: Four years of austerity, privatizations, militarism and attacks on refugees—Part 2

“Show me your friends and I’ll tell you who you are.” Whoever follows this maxim quickly gets a picture of Syriza’s politics. In the first days after his election in January and September 2015, Prime Minister Alexis Tsipras forged a coalition with the Independent Greeks (Anel), an ultra-right split-off from the conservative Nea Dimokratia (New Democracy, ND). Anel, which won less than 5 percent in both parliamentary elections in 2015, has now sunk into political irrelevance.

But Anel had performed its intended role. Tsipras did not choose his coalition partner despite, but rather because of, its reactionary nationalism, aggressive militarism and xenophobia. At heart, both parties pursued the same goals, for which Anel’s long-standing connections to the military and police apparatus were useful.

The scandal surrounding Anel politician Dimitris Kammenos in September 2015 aimed a spotlight at the sort of extreme right-wing figures that, thanks to Syriza, now held government posts. Just one day after assuming the position of Deputy Minister of Infrastructure, Dimitris Kammenos had to clear the field due to anti-Semitic, racist and homophobic remarks.

Tsipras bestowed the influential Defense Ministry on Anel boss Panos Kammenos, naming the Syriza politician Dimitris Vitsas as his deputy. Kammenos not only maintained close connections to the army, but also to the Orthodox Church and the financial elite of Greece. He had spent 20 years as an ND representative, and served as Vice-Minister for Merchant Shipping between 2007 and 2009, serving the interests of wealthy ship owners.

While continuing their plunder of retirees and workers, Syriza and Anel saw to increasing the already tremendous military budget. According to the recent statistics from the Stockholm International Peace Research Institute (SIPRI), in 2018 Greece spent 2.4 percent of its gross domestic product for its armed forces, putting it in second place among NATO states, directly behind the United States.

Figures from the European statistics office Eurostat show that in 2017 Greece spent 5.3 percent of its total budget on defense. Among European Union (EU) states, only Cyprus committed a higher proportion to its defense budget.

Military Cooperation with Israel, US and Egypt

A significant portion of these funds flowed into expanded military cooperation with governments infamous for their dangerous war policies in the Middle East and bloody suppression of their own working class.

As early as July 2015, Greece signed a military agreement with Israel under Prime Minister Benjamin Netanyahu, who subjugates the Palestinians and acts as Trump’s right-hand man in the Middle East. The agreement enabled Israeli pilots to train in Greece and gave the Israeli army greater access to NATO structures in the Aegean. In that same month, Israel held an 11-day military exercise near Mount Olympus. In return, the Greek army took part in an exercise in Israel including joint combat training for the air forces of both countries.

In January 2016, the Syriza government concluded a further agreement with Israel and Cyprus. The focus was on closer economic cooperation with regard to the rich sources of gas in the Mediterranean, as well as the development of military and secret service relations, including in the so-called “war on terror.”

In this way, Greece proceeded to transform itself into a partner of Israel in its confrontation with Iran. As the Washington Monthly emphasized in June of this year, “For Israel, the trilateral relationship’s main advantage is the way it can help prevent Tehran from spreading its influence through Turkey. Israel likely also sees the partnership as an extra mechanism to block potential Iranian supply chains of weaponry, goods, and artillery into Lebanon and Gaza.”

The close relationship to the Netanyahu government goes hand in hand with a strengthening of military cooperation with the US. Just days after the election of Donald Trump as President of the United States in November 2016, Defense Minister Kammenos stated to the conservative newspaper Kathimerini that beyond the modernization of its F-16 Viper fighter jets—at a cost of around $2.4 billion—Greece sought to obtain 20 F-35 stealth fighters.

Both aircraft models are produced by the US arms supplier Lockheed Martin, which demands around $90 million for an F-35. Kammenos suggested financing the purchase with funds from the US military assistance program. In 2017, he took the first official step in requisitioning the jets and met with various US representatives. According to SIPRI, Greece imports the greatest portion of its weaponry from Germany, followed by the US.

In October 2017, Tsipras visited the White House and prostrated himself before the Trump administration. He declared Greece’s relationship to the United States to be “at their best” since the Second World War and expressed gratitude for the assistance in matters of “security and defense.” When a journalist brought up Tsipras’s earlier critique of Trump, the Greek premier contradicted him and declared: “We have common values.” 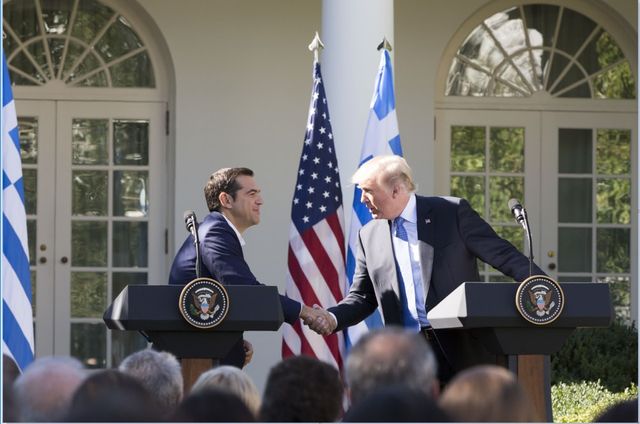 Among these “values” was the war policy in the Middle East. An important goal of both governments was the expansion of the NATO base in Souda Bay in Crete. According to an article in Le Monde Diplomatique from November 22, 2017, the activities of the US Navy “have increased spectacularly in 2016 and 2017.” There is located the strategically important deep-water port of Marathi, which the US Navy needs to dock nuclear-powered aircraft carriers and which, according to Le Monde, plays “a central logistical role” and moreover serves as a “launch pad for the operations of the US Air Force in the region.” The base is thus particularly relevant to the confrontation with Russia and China.

In September 2018, Joseph Dunford, the highest-ranking officer in the US armed forces, met for consultations with his counterpart, Evangelos Apostolakis, in Athens. In comments to the press, Dunford declared that the US desires to further expand its military activities in the region, eliciting a positive reaction from the Greek side. He emphasized the importance of Souda and said that if “you look at potential operations in the Eastern Mediterranean, the opportunities here are pretty significant.”

The Syriza administration also closed an arms deal for more than €66 million with the reactionary monarchy of Saudi Arabia. The planned 2017 delivery of 300,000 shells, which in all likelihood would have been deployed in the bloody war in Yemen, was only frozen after protest by Amnesty International and because the government came under fire for inconsistencies in the contract. Despite that, Tsipras backed Kammenos and defended the deal as “a beneficial agreement for the Greek state.”

The militaristic and deeply anti-working-class character of the Syriza government was expressed most clearly in the openly publicized friendship between Tsipras and General Abdel Fatah Al-Sisi, the “butcher of Cairo,” who since 2013 has led a brutal military dictatorship in Egypt .

Just months before taking office, Tsipras traveled to the trilateral summit of the Mediterranean countries Greece, Egypt and Cyprus, which has taken place annually since 2014 and enables greater military, security and economic cooperation between these nations. In 2017, Egyptian naval and air forces participated in the joint military exercise “Medusa 5” with the Greek Navy. As shown in this video, Kammenos came in person to welcome Egyptian soldiers.

In 2018, Greece hosted the Mediterranean summit on Crete. The images showing a laughing Tsipras side by side with Al-Sisi should also send a clear signal to the Greek working class: Should you, like the Egyptian masses, dare to rise up in revolution, there awaits you the same counter-revolutionary terror—mass arrests, torture and executions.

Also in 2018, Syriza worked out an agreement with Macedonia to end the years-long dispute over its name, and thus enabled the accession of the small Balkan state into NATO. Despite all the nationalist hubbub that this elicited, Tsipras first and foremost provided a geopolitical and economic service to the imperialist powers, thereby winning praise from NATO head Jens Stoltenberg, the EU and the Trump administration.

In domestic politics, the agreement with the renamed North Macedonia led to a break with Anel. Tsipras used the resignation of Panos Kammenos to strengthen the ultra-right and militaristic tendencies of the Greek state. He appointed the Commander-in-Chief of the Army, Evangelos Apostolakis, as Minister of Defense, and thus for the first time since the end of the military dictatorship gave an active-duty military officer a ministry position.

The Syriza government in Greece: The pseudo-left in power