Astronomers using observations taken with the Hubble Space Telescope have for the first time found evidence of water vapor in the atmosphere of an exoplanet that is potentially a rocky world like Earth and orbiting in its parent star’s Òhabitable zone,Ó the region where liquid water could pool on the planet’s surface.

The discovery was made by two independent teams of researchers, one based in Britain and the other in Canada and the United States, using archived data from Hubble, the Kepler Space Observatory and the Spitzer Space Telescope. The work is the culmination of four years of effort by dozens of scientists and hundreds of engineers who have analyzed different parts of the data and helped maintain the spacecraft.

The exoplanet, K2-18b (also known as EPIC 201912552 b), was originally identified in 2015 by the teams that operated the now-decommissioned Kepler, one of more than 1,200 worlds discovered during the second phase of that telescope’s mission. It was found by carefully cataloging periodic drops in the brightness of the red dwarf star K2-18, using eight different observation campaigns over three years made by Hubble’s advanced Wide Field Camera 3 and after ruling out other possible ways the star’s light could be dimmed. 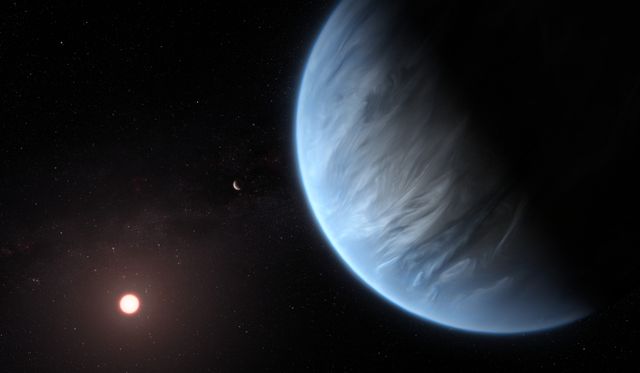 An artist's conception of K2-18b as it orbits its parent star. Credit: ESA/Hubble, M. Kornmesser

Water vapor was found using similar but more precise techniques. As the exoplanet passes in front of its star, not only does the brightness change, some of the wavelengths (colors) of light emitted are absorbed by the planet’s atmosphere, which acts like a filter. This in turn provides information about the chemical makeup of the atmosphere, revealing hydrogen and helium in addition to water vapor. The team from Britain also suspects that there might methane and nitrogen in the atmosphere, but those molecules have yet to be detected.

One of the main reasons this extrasolar system was chosen as a target for such consistent study is that early analyses of K2-18b revealed the possibility that the surface temperature of the world is within five degrees Celsius of that of Earth and thus capable of supporting liquid water and complex organic molecules, necessary ingredients for life as we know it. The exoplanet is also one of many of those discovered that have masses greater than that of Earth, the heaviest of the four rocky planets that orbit our Sun, and smaller than Neptune, the smallest of the four gas giants. These are poorly understood because they have no analog in our Solar System. Since we know they exist, however, they still must be incorporated into models of planetary formation.

The atmosphere of the exoplanet is also relatively easy to observe. The star K2-18 is much dimmer as compared to our Sun, which means there is less light to obscure the planet, but not so dim that there was too little light to pass through the exoplanet’s atmosphere. The exoplanet itself orbits the star every 33 days, which allowed for multiple observations in short span of time. The target star is also much smaller than the Sun, making the signal caused by the planet transiting in front of it more detectable.

The largest unknown about the system is whether or not the exoplanet is actually rocky like Earth, gaseous like Neptune, or even icy like a large Pluto. It is about three times the size and eight times the mass of our planet, which places it on the border between the two possibilities. Further research, possibly with new space telescopes, will have to be conducting to determine which is more likely. All that is known is that, if it is a rocky world, its surface gravity would be significantly higher than on our world.

Moreover, even if K2-18b is determined to be rocky, it is still not guaranteed to be Earth-like. When Venus was confirmed to be covered in thick clouds of carbon dioxide in the early 20th century, it was at one point hypothesized that the surface might be a similar to jungles on Earth, hot and steamy thanks to a runaway greenhouse effect. Measurements by spacecraft, including photographs from the surface by a series of Soviet Venera probes disproved this idea, revealing Venus to be a hellish landscape with active lava flows snaking across the surface while sulfuric acid rains from the sky.

That even one exoplanet has water vapor in its atmosphere suggests that there are many such worlds in the galaxy and likely among those already observed. There are to date 4,055 exoplanets discovered and thousands more candidates that have yet to be confirmed, including 818 just added to the NASA Exoplanet Archive. Including among this list are 1,309 that have diameters similar to or less than K2-18b and 32 with masses similar to or less than those of K2-18b, meaning that there are many possible rocky worlds with water vapor in their atmospheres.

The majority of these planets were found using the Kepler spacecraft, which operated from 2009 to 2018 and discovered thousands of new worlds. Whereas before Kepler, there were only a few stars that were known to have planets, it is now thought that every star is orbited by at least one planet and likely more, a fact that has become a mainstay in the scientific research of the astronomical community and the cultural life of the world’s population. 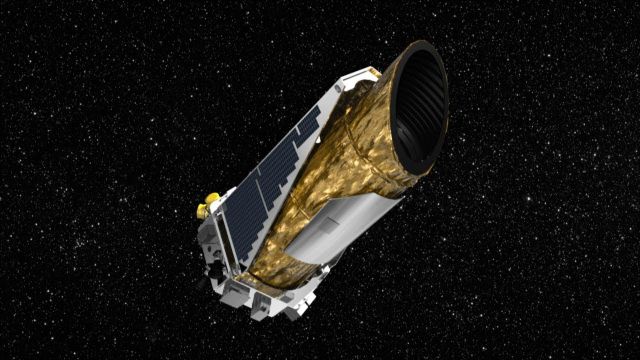 A rendering of Kepler in its orbit trailing Earth. Credit: NASA

Kepler also revealed the multitude of differences between each extrasolar system, of which no two are the same. Among the first exoplanets confirmed were massive and extraordinarily hot gas giants orbiting their parent stars closer than Mercury orbits the Sun. Others include many small and likely rocky worlds orbiting some of the smallest stars. Some of these include worlds around stars like the Sun with planets the size of Earth. Among the thousands of worlds already discovered and the millions or billions yet to be located, there is little doubt that a Òsecond EarthÓ will be found.

While Kepler is no longer in service, it was succeeded by the Transiting Exoplanet Survey Satellite (TESS), a space telescope launched in April 2018. Its first images were released almost exactly a year ago and it has already found 29 confirmed exoplanets and another 1,077 candidate exoplanets. It uses the same principles to find other worlds as Kepler, by watching for drops in a star’s brightness, but unlike Kepler is able to do so for the entire sky. It is estimated that it will find 20,000 exoplanets by the end of its mission.