Official Secrets: A whistleblower attempts to prevent the Iraq War

Directed by Gavin Hood; written by Gregory Bernstein, Sara Bernstein and Gavin Hood; based on the book by Marcia Mitchell and Thomas Mitchell

Official Secrets, by South African director Gavin Hood (Eye in the Sky, 2015; Rendition, 2007; Tsotsi, 2005) and based on the 2008 non-fiction book The Spy Who Tried to Stop a War: Katharine Gun and the Secret Plot to Sanction the Iraq Invasion by Marcia and Thomas Mitchell, was released in US theaters August 30 after a premiere at Sundance Film Festival earlier this year. 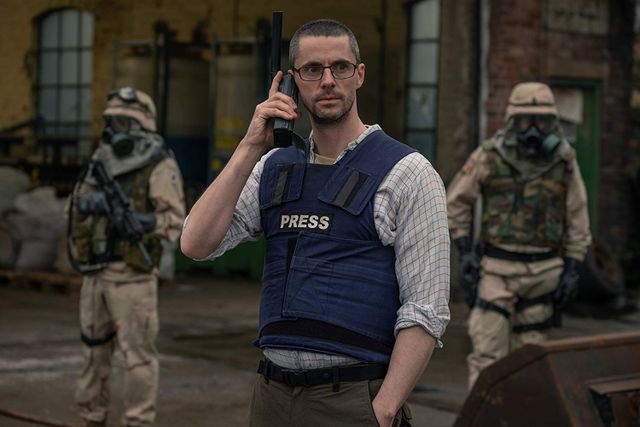 Hood’s film dramatizes events in 2003 and 2004, beginning with British whistleblower Katharine Gun’s decision to leak a memo exposing the criminality of the Iraq War and ending with her prosecution by the British crown for violation of the Official Secrets Act, under which sharing state-classified information for any reason is an offense.

When the film opens, Gun (Keira Knightley) is happily married to Yasar (Adam Bakri), a Turkish national living in the UK on a temporary visa, and passionately invested in television news. In an early scene, she yells at a government official on her television for lying about weapons of mass destruction. Born and raised in Taiwan and having two years’ experience teaching English to young students in Japan’s Hiroshima Prefecture, she has taken a job translating Mandarin Chinese at the Government Communications Headquarters (GCHQ), the British spy agency, in Cheltenham, England.

Things take a turn when her office receives a copy of a memo from an official of the US National Security Agency (NSA), asking GCHQ for support in the agency’s attempts to spy on “UNSC [United Nations Security Council] members Angola, Cameroon, Chile, Bulgaria and Guinea, as well as extra focus on Pakistan UN matters.”

The aim is to discover “information that could give US policymakers an edge in obtaining results favorable to US goals”—i.e., information that could be used to blackmail UN Security Council members into supporting a resolution for war in Iraq. Believing publication of the memo could provoke a debate that might prevent the war, Gun arranges to leak the memo to a friend of hers in the anti-war movement. Two weeks later, it finds its way into the hands of Martin Bright (Matt Smith), the home affairs editor of the Observer .

The editorial staff of the Observer are initially reluctant to pursue the story. They are concerned that the memo might be a fake, but more significantly, they are worried about sacrificing the paper’s good relationship with the government of Labour Prime Minister Tony Blair, on account of their heretofore pro-war stance, and the consequences of violating the Official Secrets Act. Why take a risk on the memo, one editor argues, when the Observer is already getting press releases on Iraq directly from Blair? But after Bright and his allies at the paper, including US correspondent Ed Vulliamy (Rhys Ifans), go to sufficient lengths to confirm the veracity of the memo, right-wing editor-in-chief Roger Alton (Conleth Hill) is persuaded to publish.

A month after Gun leaked the memo, she discovers it on the front page of the Observer in a convenience store and rushes home in a panic. After days of pronounced anxiety and interrogation of herself and her coworkers by officials at GCHQ, she comes forward to save her colleagues from further questioning. Imprisoned overnight, a detective further interrogates Gun and insinuates that Yasar, a Muslim, may have directed her to leak the memo. Infuriated, Gun delivers her famous and principled line, “I have only ever followed my conscience.”

Meanwhile, the Security Council does not pass the UN resolution for war, but the invasion of Iraq proceeds anyway. Gun, now released, and the journalists at the Observer take the invasion as a personal failure. Gun contacts UK human rights organization Liberty, which offers to defend her in court if charges are brought against her. The detective who interrogated her, however, arrives at Gun’s home to inform her that any sharing of classified information with her lawyers, which would be necessary for her defense, would be a further violation of the Official Secrets Act. 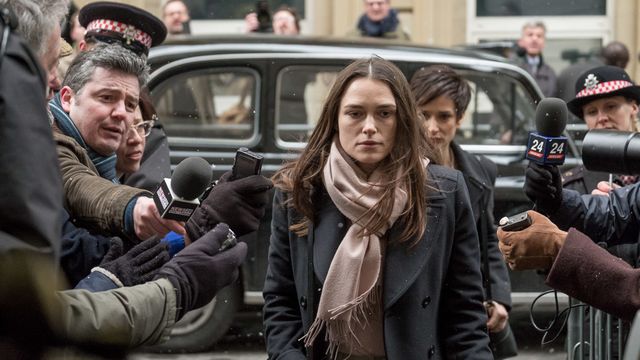 It is not until six months later, when Gun’s life has reassumed something approaching normalcy, that her lawyer, Ben Emmerson (Ralph Fiennes), resumes contact, informing her that Liberty has gotten the gag order lifted and that charges have finally been brought against her. In discussion with Emmerson, Gun chooses to plead the defense of necessity, arguing that a breach of the Official Secrets Act was necessary to prevent an illegal war.

Her defense ultimately hinges on whether it can secure documents proving that Blair’s attorney general, Peter Goldsmith, advised Blair that the war’s legality hinged on a UN resolution at the time Gun leaked the memo.

In aesthetic terms alone, the film is merely serviceable: the score is generic, the actors are convincing but unremarkable, and the imagery on display, with a few exceptions, is relatively uninspiring, though the set design, including period-appropriate televisions, cell phones and computer technology, is something of an exception to this. Aside from an opening flash forward, the narrative is depicted in a straightforward manner, unlike Hood’s earlier, non-chronological effort, Rendition .

The content of Official Secrets, however, especially in the context of 2019, elevates it to the status of a remarkable film. To raise the specter of the mass movements against the Iraq War when the US is mounting war preparations against Iran, and imperialist countries the world over are preparing for great power conflict; to celebrate investigative journalism when award-winning journalist and WikiLeaks founder Julian Assange is in Belmarsh prison, facing deteriorating health and the threat of extraordinary rendition to the US for exposing its crimes; and to celebrate whistleblowers when Chelsea Manning is imprisoned for refusing to testify against Assange, demonstrates an all-too-rare sensitivity to important problems of our time.

The film even finds time to protest the British government’s authoritarian crimes against immigrants and refugees. In a likely deliberate act of bullying by the British government, Yasar is detained during a routine immigration check-in and scheduled for immediate deportation while Gun is preparing her defense. After Gun spends an entire day in frantic calls and meetings, she is only able to get her husband released moments before he can be forced to board a plane.

Official Secrets rounds out its content through seamless integration of documentary footage. The invasion of Iraq is marked by a montage of bombings and news appearances and press conferences with government officials, up to and including George W. Bush and Blair, that amount to open indictment of these figures for their crimes.

In its focus on journalism in the opening years of the 21st century and, moreover, its unflagging faith in the significance of its content over needless flourishes in form, Official Secrets perhaps most closely resembles Spotlight (Tom McCarthy, 2015), winner of the Academy Award for Best Picture. Likewise, it deserves praise and a wide viewing.