Vance Pearson, the United Auto Workers Region 5 director and member of the UAW’s international executive board, was arrested Thursday afternoon on charges of embezzling hundreds of thousands of dollars of union funds.

The arrest occurs two days before the expiration of the labor agreements for 158,000 workers at General Motors, Ford and Fiat Chrysler who are facing a fight against the auto companies’ demands for more concessions and job cuts. The further discrediting of the UAW has made it more difficult for the union to play its traditional role in suppressing opposition and imposing the dictates of management.

Pearson, the 10th person indicted in the expanding federal corruption probe, is a key ally of current UAW President Gary Jones. He was Jones’ top lieutenant when the latter was Region 5 director, and he took over his post when Jones was appointed president.

Pearson also served on the board of directors of Jones’ personal charity.

The arrest greatly increases the possibility of criminal indictments against Jones. The charges listed in the FBI’s criminal complaint overlap with Jones’ tenure as Region 5 Director. 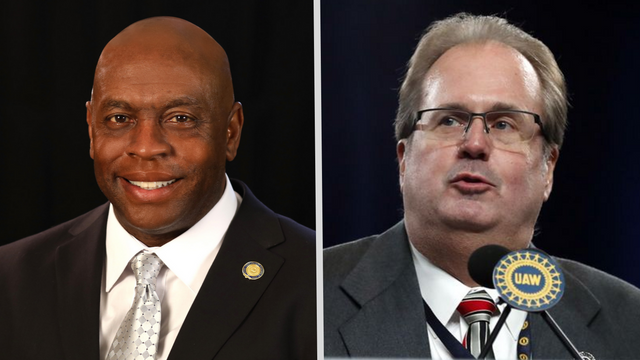 Pearson was one of the people whose homes were raided by the FBI two weeks ago, along with Jones himself, previous UAW chief Dennis Williams and his former top assistant Amy Loasching. According to eyewitnesses, FBI agents were inspecting Jones’ golf clubs and counting out wads of cash on the floor of his garage.

An unnamed “UAW Official A” listed in the complaint against Pearson is almost certainly Jones. If Pearson cooperates with federal prosecutors like other indicted UAW officials have done, it is very possible that Jones will be the next to face indictment.

The Trump administration is hanging the threat of possible receivership and extended jail time over the heads of the UAW executives to make sure that they do not adapt in the slightest to the expectations of autoworkers and instead impose the sweeping concessions demanded by the automakers.

The federal charges center around falsified expense reports surrounding the Region 5 annual leadership conference in Palm Springs, California. This bogus “leadership training” conference is in reality a luxury vacation for UAW officials, complete with endless rounds of golf and expensive meals and liquor. It has already featured heavily in other indictments against UAW officials, including former UAW-FCA Vice President Norwood Jewell, recently sentenced to a 15-month jail term.

According to the complaint, Pearson and UAW officials A, B, C and D falsified reimbursement forms to pay for luxury expenses unrelated to the conference. This included $400,000 in rent and cleaning expenses for expensive villas with private pools and condominiums in gated neighborhoods.

Pearson and other unnamed union officials would routinely stay in these villas for months after the five-day conferences, falsely filing these as conference-related expenses.

The UAW also spent $60,000 on lavish meals at Palm Springs area restaurants between 2016 and 2018. One of these meals involved a $1,760 purchase of an ultra-premium brand of champagne originally produced, according to its creators, “to satisfy the demanding tastes of [Russian] Tsar Alexander II.”

Many of these expenses were reportedly billed to the “[UAW Official A] group,” which also signed many of the invoices. One of the government’s cooperating witnesses alleges that Pearson and UAW officials A and C tried to conceal these expenses by lumping together line items under generic terms such as “outside activities” and inflating the costs of hotel rooms.

The cooperating witness “believed the purpose of the endeavor was to conceal the true nature of the union’s expenditures from its members,” according to the complaint.

The UAW mounted a pathetic defense in a statement on its website, which reads: “While these allegations are very concerning, we strongly believe that the government has misconstrued any number of facts and emphasize that these are merely allegations, not proof of wrongdoing.” It continues: “[W]e will not let this distract us from the critical negotiations underway with GM to gain better wages and benefits for the more the 400,000 members of our union.”

Pearson’s arrest further confirms what autoworkers already know: that the UAW is a criminal syndicate hostile to the interests of the autoworkers it falsely claims to represent. In the looming battle between the autoworkers and the automakers, the UAW stands on the side of management.

This money squandered was workers’ own money, paid for out of their dues money. And yet while the UAW spared no expense gorging themselves with funds stolen out of workers’ pockets, the union is threatening to condemn workers to financial destitution in the event of a strike. According to an informational brochure being distributed by the union, autoworkers will receive a paltry $250 per week in strike pay, and only after the first week of the strike and with a laundry list of conditions and restrictions.

The single round of champagne UAW officials enjoyed during a meal at an exclusive restaurant was equivalent to a week’s worth of strike pay for seven autoworkers. The total spent on villas and condos would fund a week’s strike pay for 1,600 autoworkers.

This demonstrates the organic hostility of the union bureaucracy to a struggle in defense of jobs and living standards. Every dollar spent in support of a strike, they understand, is a claim against their own extravagant standard of living, which is many times higher than that of rank-and-file autoworkers.

The UAW leadership long ago converted the strike fund into a slush fund to support their own bloated salaries. Between 2001 and 2014, the value of the fund collapsed from $1 billion to $600 million, before partially recovering to $760 million today, which is due in part to an increase in dues, allegedly to prepare for a strike in 2015.

Pearson’s arrest, taking place only two days before the expiration of the current UAW contract, greatly heats up an already explosive situation. No doubt, UAW officials are involved in parallel negotiations with both General Motors and the FBI, with future prosecution and jail time contingent on their ability to deliver concessions to the companies.

However, from the standpoint of many industry analysts, who view the indictments with an increasing sense of unease, the federal government is playing a dangerous game. The very exposure of UAW crimes threatens to provoke a social explosion among autoworkers.

Autoworkers must move now to take the conduct of this fight out of the hands of the UAW. Workers must take the initiative to form rank-and-file committees to organize a struggle independently of the union, formulate their own demands and link up with their class brothers and sisters throughout the US and in other countries.

They must also demand that their dues money, which is funneled into the pockets of UAW bureaucrats, be placed at the disposal of autoworkers, including through the tripling of strike pay. The money to pay for this must come from the elimination of the bloated salaries of the UAW officials and the closing and selling off of the corrupt UAW-company training centers.