On September 19 at 7:00 pm Eastern Time, the WSWS Autoworker Newsletter is hosting an online meeting to discuss the strategy and perspective needed to organize autoworkers against the conspiracy of the corporations and the United Auto Workers. To participate, visit wsws.org/autocall.

The Trump administration is engaged in secret talks to shut down the strike at General Motors, Politico reported Tuesday afternoon.

According to anonymous sources who spoke with the media outlet, National Economic Council Director Larry Kudlow and White House trade and manufacturing adviser Peter Navarro are both involved in the talks. 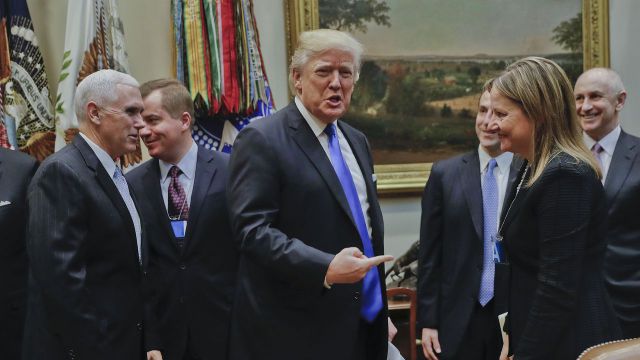 The terms of the proposed deal to end the strike, according to the sources, involve the re-opening of the Lordstown Assembly plant in northeastern Ohio, which was shuttered by GM this March.

The White House quickly released an official denial of the Politico report. However, given the dangers to the American ruling class posed by the strike, as well as the fact that Politico received confirmation for its story from multiple sources, the denial cannot be considered credible.

Autoworkers must be warned: the intervention by the Trump administration is not in their interests. All of the demands of autoworkers, including the elimination of the tier system and the upgrading of all temps, improved wages, health care and pensions, and the reversal of all layoffs, will be swept aside on the basis of lying promises about “saving American jobs."

The United Auto Workers will seek to use a government-brokered agreement to provide a cover for its betrayal of the strike, which it sought unsuccessfully to avoid and is working to shut down at the earliest possible opportunity.

While details of the government proposal are still scant, the fact that it involves reopening the Lordstown plant indicates that it is along the lines of GM’s latest contract proposal, which ties promises to eventually reopen one of the plants it has targeted for closure to massive increases in out-of-pocket health care expenses, a major expansion of temporary workers and other concessions.

It is also possible that a Trump-brokered deal would involve the closure of plants in Mexico and relocation of their products to Lordstown. Trump responded to GM’s announcement last year that it would close four plants in the United States with a torrent of nationalism, demanding that the auto giant shutter factories in Mexico and shift production to the US.

Trump reiterated this in comments yesterday threatening the strike with federal mediation when he declared, “We don’t want General Motors building plants outside of this country.”

Such a move would be aimed at pitting US workers against their brothers and sisters in Mexico under conditions where workers on both sides of the border are expressing support for a united struggle. The unification of autoworkers across borders is anathema to the global auto giants and the US ruling class, who operate on the principle of “divide and rule.”

The growing sentiment for an international struggle has been expressed both by strikers’ comments to the WSWS Autoworker Newsletter and by the refusal of GM workers in Silao, Mexico to accept increases in production during the strike.

The direct intervention of the capitalist state into the auto strike raises immense dangers. Faced with the most important movement of American industrial workers in a generation, the ruling class is determined to prevent the strike from becoming the starting point for a broader social movement.

Victory in the strike is possible, but only if the GM workers broaden the struggle to mobilize all US autoworkers and other sections of American workers and youth and appeal for the active support of workers internationally. The US government and both big business parties are, along with their bribed operatives in the UAW apparatus, the most determined enemies of the GM workers.

To bring the full weight of the working class to bear and take the struggle out of the hands of the UAW traitors, autoworkers must form rank-and-file committees to run the strike and establish links to other sections of workers, including Mexican, Canadian and other foreign workers.