On September 19 at 7:00 p.m. Eastern Time, the WSWS Autoworker Newsletter is hosting an online meeting to discuss the strategy and perspective needed to organize autoworkers against the conspiracy of the corporations and the United Auto Workers. To participate, visit wsws.org/autocall.

At least five GM workers were arrested on the picket line this morning in Spring Hill, Tennessee for attempting to block a car-hauling truck from leaving the plant with new GM vehicles, presumably built before the strike started.

Eyewitness video posted to Facebook shows two pickets, one male and one female, being cuffed by police on the picket line, while several other workers stand in front of a stopped semi-truck at the entrance to GM’s Spring Hill Assembly plant near Nashville. The male was later identified to the WSWS Autoworker Newsletter as Tim Stannard, president of UAW Local 1853.

The incident in Tennessee is only the latest indication that police are intervening more aggressively against pickets to open up traffic into the plants. A reader of the Autoworker Newsletter provided photographs of police vehicles parked near the picket line at Warren Tech Center in suburban Detroit. The police were preventing pickets from blocking the entrances, the reader said. Both hourly GM workers and Aramark maintenance workers are on strike at the location. 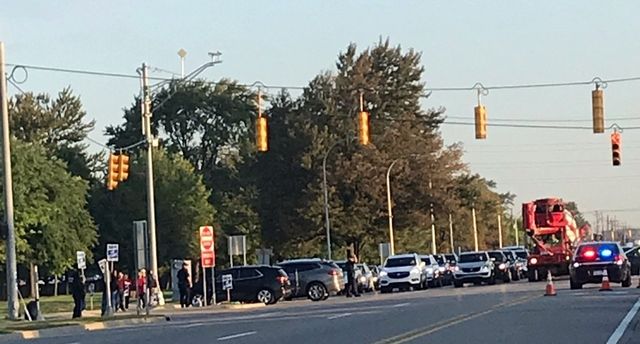 GM is already attempting to re-open at least some of its plants with scab labor, including the key assembly plants in Arlington, Texas and Wentzville, Missouri, strikers have confirmed to the Autoworker Newsletter. While at other locations the company is still moving material in and out of the plants.

Pickets are already being struck on the picket line by vehicles driven by scabs. A scab trucker in Swartz Creek, near Flint, struck at least three pickets in separate incidents, according to cell phone footage picked up by local media. Fortunately, none were seriously injured, although one was taken away in an ambulance.

By the same token, strikers are becoming increasing assertive in preventing vehicles from crossing the picket line. Strikers succeeded in backing up semi-truck traffic more than a quarter mile at the AC Delco and GM Genuine Parts processing center in Burton, Michigan, according to local police.

Roxanne Williams, a GM retiree, spoke to Mlive.com while standing off against a vehicle trying to enter the facility. “This truck wanted to hit me because it’s crossing the picket line,” she said. “You’ve got officers saying that we’re trespassing on GM’s property, but we work on this property so how are we trespassing on the property when we work here?”

The increasingly assertive moves by GM and the authorities to break the strike suggest that they do not expect the UAW to be able to shut it down soon and are preparing for an all-out battle against autoworkers. This makes it all the more necessary that GM workers take the conduct of the struggle into their own hands by forming rank-and-file strike committees to unite with Ford and Fiat Chrysler workers and prepare an industrywide struggle.

The strike is already beginning to cause disruptions to GM’s global supply chains. GM is temporarily laying off roughly 1,200 workers at its final assembly plant in Oshawa, Canada due to a parts shortage caused by the US strike, the company’s Canadian arm confirmed to CNBC on Wednesday. A worker from the Oshawa plant, which is one of the five North American plants slated for closure by GM, told the WSWS Autoworker Newsletter, “Truck plant shut down yesterday due to strike and car plant by Friday due to parts shortage from strike! Karma’s something GM, remember that! It’s our time.”