The strikers, who walked out of the Sriperumbudur plant on August 26, want recognition of their union—the Chengai Anna Mavatta Jana Nayaga Thozhilalar Sangam—a wage rise and an end to the harsh working conditions. MATE has responded by dismissing 22 trainees and 33 professionals and suspending 15 permanent employees.

The All India Central Council of Trade Unions (AICCTU), to which the new union is affiliated, has refused to mobilise the remaining workforce at the plant or other MATE facilities to support the strike and defend the victimised workers.

In line with MATE’s attempts to divide the workers and maintain production, the union federation, which is controlled by the Maoist Communist Party of India-Marxist Leninist-Liberation (CPI-ML-Liberation), claims that the non-striking employees would also be victimised. It has issued no appeal to other Indian auto workers or internationally to defend the strikers. 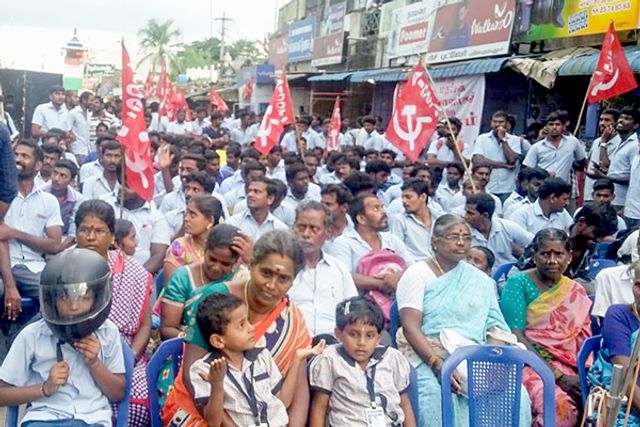 MATE is the largest supplier of moulded parts, assemblies and modules to India’s domestic automotive industry. It has 11 factories in India, including in Tamil Nadu, Haryana, Gujarat, Rajasthan and Maharashtra states.

The Sriperumbudur plant employs over 2,000 workers but only 568 are permanent. Another 1,000 are employed on contract and 500 as trainees under a government-sponsored program. MATE workers established the new union in late July in order to fight low wages, brutal working conditions and sub-standard food at the plant’s canteen.

Addressing a meeting of MATE workers near the Sriperumbudur bus terminal on September 13, AICCTU National President S. Kumarasamy issued various pathetic appeals to the company whilst offering advice on how to boost the Indian economy.

The MATE workers should be paid a minimum monthly wage of 40,000 rupees ($US571), Kumarasamy said, because low wages had slowed the Indian economy. He claimed that the permanent workers’ strike had forced the company to increase contract employees’ pay and provide meals for night shift workers.

“Permanent workers should be happy about this gain for contract workers,” he insisted, ignoring the fact the miserable concessions, which were granted to stop contact workers joining the walkout, could be removed at any time.

While Kumarasamy told the strikers that the company was part of a giant global corporation that employed 150,000 employees he issued no call for these workers to be mobilised.

Kumarasamy claimed that union officials at Hyundai and Nissan plants in India were backing the MATE strikers. This “support,” however, consisted of warnings to Hyundai and Nissan managers that parts made by MATE’s contract workers and trainees would be substandard. 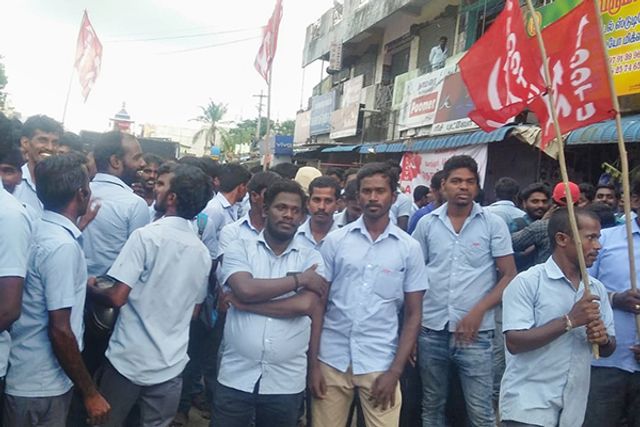 He also cynically declared that the MATE workers’ conditions could be improved if they elected CPI-ML-Liberation legislators in the 2021 Tamil Nadu state election. Notwithstanding its occasional “left” rhetoric, the CPI-ML-Liberation is a thoroughly bourgeois formation. In the recent parliamentary elections it supported the Congress party.

Kumarasamy falsely claimed that the Stalinist Communist Party of India-Marxist or CPM-controlled Centre of Indian Trade Unions (CITU) had led the auto workers’ wage struggle at Yamaha India in December to victory. His praise for the new pay agreement, which is based on “three parameters,” points to the sort of deal that the AICCTU will attempt to impose on the Motherson strikers.

As the WSWS previously explained, the CITU shut down the Yamaha workers’ strike after signing a pay deal with the company in which it “pledged to promote ‘industrial peace’ and prevent sit-down strikes.”

The three-year agreement between Yamaha India and the union at the Chennai plant has not been made public. The “three parameters”—Individual Performance, Shop Performance and Plant Performance—are designed to drive up production and intensify exploitation.

According to one media report, a worker will only receive an average monthly pay rise of 14,000–20,000 rupees over a period of three years, depending upon their category and experience.

Yamaha Motor India Group chairman Motofumi Shitara described the sell-out deal as “a significant achievement” whilst U. Velmurugan, the Yamaha Motor union representative, said it was “a golden moment for all of us.” He agreed to extend the union’s full support “in achieving the company’s target and future growth plans.”

The ongoing strike action at MATE is part of the growing resurgence of workers struggles globally. The fight for permanent jobs, decent wages and better working conditions are increasingly becoming the common demands of workers globally.

The victimisation of striking MATE workers, increasing use of low paid contract workers, are not an isolated phenomenon. Indian auto workers are facing massive job and wage cuts and attacks on conditions as employers attempt to impose the impact of the slowing Indian economy on to workers.

Bala Krishnan, a striking worker told the WSWS, that MATE management told the Deputy Labour Commissioner that the company would not recognise the new union or hold any discussions on wages, conditions or the suspensions, terminations and dismissals until the strike ended.

Balakrishnan said that the strikers were not prepared to bow down to these ultimatums and would remain on strike until they won their demands. A wage increase, he said, is our chief demand, but all suspensions, terminations and dismissals must be revoked

Fearful of victimisation many MATE strikers did not want to reveal their names. They told the WSWS, however, that they had no faith that the AICCTU leadership would fight to secure workers’ demands.

The struggle to win better wages, improved working conditions, a pension scheme and medical benefits, requires the mobilisation of all sections of the Indian working class and on the basis of a socialist and international program.

Like the counterparts internationally, the Indian trade unions are tied to the capitalist system and the nation state, and are hostile to this perspective. That is why MATE workers and auto workers across India need to build their own action committees, independent of the trade unions, in order to take forward this fight. They should also extend their support to General Motors strikers in the US and establish international solidarity and unified action in a common fight against the global auto corporations.