Trump’s presence was meant to highlight his political affinity with Modi—an arch-reactionary and Hindu supremacist—and the strength of the “Indo-US global strategic partnership,” a key element in Washington’s plans to contain and, if need be, militarily thwart China’s rise.

India’s prime minister since 2014, Modi has markedly increased India’s integration into American imperialism’s strategic offensive against China. This has included throwing open India’s ports and bases to US warships and warplanes, and expanding trilateral and quadrilateral cooperation with the US and its principal regional allies, Japan and Australia. 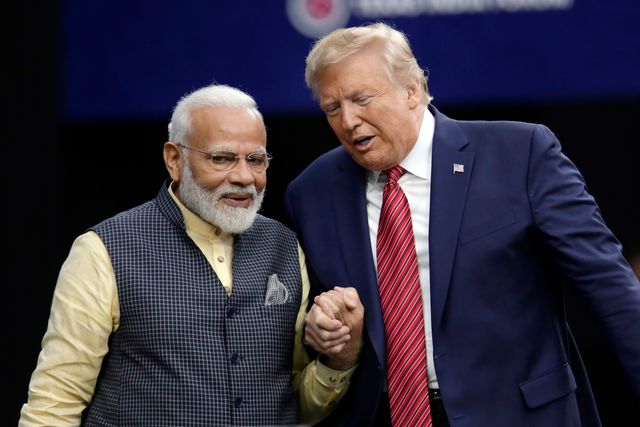 But Modi was especially eager to have a demonstrative display of US support now, under conditions where his Bharatiya Janata Party (BJP) government has unilaterally altered the status of disputed Jammu and Kashmir, running roughshod over the rights of the Kashmiri people and inflaming relations with Pakistan, India’s nuclear-armed arch-rival.

Trump did not disappoint in lavishing praise on Modi—who was long barred entry to the US because of his role in instigating and facilitating the 2002 Gujarat anti-Muslim pogrom—and repeatedly pointing to the commonality in their reactionary policies.

Modi responded in kind, only India’s prime minister didn’t just praise Trump, he genuflected and groveled before him.

“From CEO to commander-in-chief, from boardrooms to the Oval Office, from studios to the global stage,” extolled Modi, Trump “has left a lasting impact.”

He went on to praise the billionaire fascist—who has repeatedly threatened to unleash unparalleled violence and has spent the last days mulling over whether to launch a catastrophic war against Iran—as “warm, friendly, accessible, energetic and full of wit.”

Modi implored the crowd to give Trump a standing ovation for his opposition to “terrorism”—the pretext the American president invokes for US belligerence around the world, but particularly against Iran.

All of this left Trump beaming. Subsequently, to further highlight their political partnership, the two leaders spent some time holding hands while interacting with the crowd.

Trump called Modi “one of America’s greatest, most devoted and most loyal friends.” He praised Modi’s socially incendiary neo-liberal economic policies and noted that they are akin to his own. “Our people,” said Trump, “are prospering like never before because we are slashing bureaucracy and cutting red tape.” On Friday, in the latest in a series of moves aimed at wooing investors, the Modi government slashed corporate taxes by about a third or 10 percentage points.

Trump touted next month’s first-ever Indo-US military exercise involving joint action by army, navy, and air forces units. He also said New Delhi and Washington will soon sign new agreements to “bolster our security relationship,” and that he looked forward to “major” Indian purchases of US weapons and weapons systems in the near future.

Particularly foul were Trump’s comments on immigration. “Both India and the US understand that to keep our communities safe we must protect our borders,” said Trump. Declaring border security “vital” to both countries, Trump vowed “unprecedented action” to block those fleeing persecution and poverty from crossing the southern US border.

Like Trump, the Modi government has launched a vicious, communally-charged campaign against migrants, real and alleged, with the aim of dividing the working class and building up the repressive powers of the state. Modi’s chief henchman, Home Minister Amit Shah, has repeatedly labelled migrants as “termites” and vowed to drop them in the Bay of Bengal.

At the end of last month, almost two million people in the northeastern state of Assam were declared “foreigners” as the precursor to their expulsion. The BJP government has vowed to extend the reactionary process by which all of Assam’s more than 30 million people were ordered to prove that they are citizens.

Trump did not mention Kashmir in his Houston speech, he didn’t need to. The unprecedented participation of a sitting US president in a campaign-style rally of a foreign leader and his fulsome praise for Modi spoke for themselves.

Determined to maintain and expand its anti-China alliance with India, Washington is utterly indifferent to New Delhi’s brutal crackdown in Jammu and Kashmir.

Trump is to meet with Pakistani Prime Minister Imran Khan in New York today. Khan has repeatedly warned that Washington’s staunch support for India, including endorsing its right to militarily “punish” Pakistan for terrorist attacks in Indian-held Kashmir, is emboldening New Delhi and threatens to precipitate all-out war.

Press reports suggest today’s Khan-Trump summit will be testy, as Pakistan finds itself at odds with Washington over multiple issues. These include, in addition to India’s steps to tighten its control over Jammu and Kashmir, Trump’s recent scuttling of a “negotiated peace” with the Taliban that Islamabad helped facilitate; and Pakistan’s close relations with Beijing, including its leading role in China’s plans to strengthen infrastructure links across Eurasia (the China-Pakistan Economic Corridor).

Modi is to have an official meeting with Trump on Tuesday, also in New York. Both South Asian leaders will address the UN General Assembly on Friday.

In his Houston speech, the Indian Prime Minister defended his government’s stripping Jammu and Kashmir of its special status, and the downgrading of what had hitherto been the country’s only Muslim majority state into two Union Territories, effectively under permanent central government trusteeship.

Article 370 of the Constitution, said Modi, had allowed “terrorism and separatism to rear its head in Jammu and Kashmir.” Of course he was silent on the Indian state’s systematic violations of Kashmiris’ rights, which culminated in the rigging of the 1987 state election and the repression of the mass protest movement that resulted—to say nothing of the state terror campaign being mounted by his government in Jammu and Kashmir today.

The region has been under a state of siege since the Modi government illegally abrogated its special constitutional status on Aug. 5. Tens of thousands of additional troops have been deployed in what was already one of the world’s most militarized regions to enforce draconian restrictions on people’s movements and suppress all signs of opposition. Thousands have been arrested without charge, and all cellphone and internet service has been cut off for the past seven weeks.

While in Houston, Modi met with the CEOs of major energy companies. In an effort to placate Trump, who has been highly critical of India’s trade surplus with the US, the Modi government has agreed to purchase oil and liquefied natural gas from the US.

Trump has been promoting US energy exports as an alternative to Iranian oil, although it is far more costly for India, both because of the greater distance and the fact that India has to pay for US energy purchases in dollars, whereas Iran has offered India the right to pay in rupees.

None of this however, has had any impact on New Delhi, which clings to its partnership with a lawless, crisis-ridden US imperialism, believing that this will provide it with a leg up against China.

While New Delhi claimed to oppose the Trump administration’s abrogation of the 2015 Iran nuclear accord and unilateral re-imposition of punishing sanctions aimed at crashing Iran’s economy, the Modi-led BJP government has fallen meekly into line. India was the world’s second biggest purchaser of Iranian oil until early May, when it did Trump’s bidding and ceased to import any oil from Iran.