This week in history: September 23–29

25 years ago: MS Estonia wreck kills 852 in the Baltic Sea

On September 28, 1994, the cruise ferry MS Estonia sank in the Baltic Sea as it carried passengers from Tallinn, Estonia, to Stockholm, Sweden. It was the worst cruise liner disaster since the sinking of the Titanic in 1912. The vessel was operated by Estline, a joint Swedish-Estonian firm.

Of the 989 people on the ship—803 passengers and 186 crew—only 137 survived, with the official death count at 852. One hundred thirty-eight people were rescued alive at sea, one of whom died subsequently in the hospital. 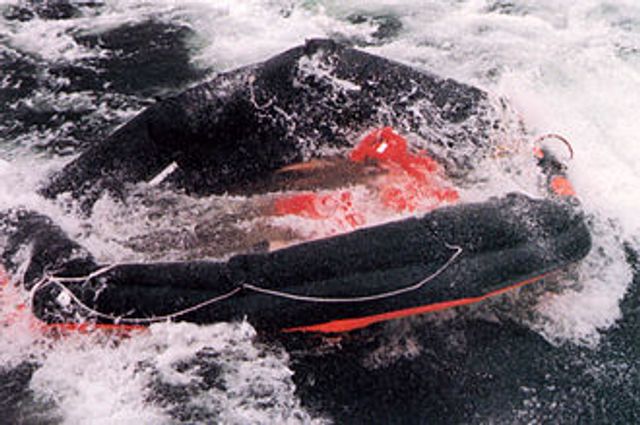 The first signs of a problem began around 1 a.m. while most of the passengers were asleep in their cabins on the lower deck. Some passengers and crew reported hearing a loud noise caused by a wave hitting one of the main doors. However, an inspection showed no signs of any major problems and the ship continued on course. Similar noises were reported over the next 10 minutes and around 1:15 a.m. the ship began tilting heavily, and then turned around to begin heading back to port, when the engines cut out.

A Mayday call was issued around 1:20 a.m. and the first rescue ship arrived at 2:12 a.m. after the ship had already begun sinking. Only 126 people managed to reach lifeboats. By the time rescue helicopters arrived, around one-third of those who had actually managed to escape the wreck had died of hypothermia in the freezing water.

The disaster was preventable. The locks on the bow door failed from the strain of the waves during what was described as a normal autumn storm. The door detached from the vessel, pulling the ramp behind it open. The bow visor’s under-design caused the mechanism to fail and water rushed in too quickly for most of the sleeping passengers to have a chance to escape. A full-scale emergency was not declared until 2:30 a.m., over an hour after the issuing of the first emergency call.

Sweden’s maritime safety director, Bengt Erik Stenmark, said six other past cases of bow door leakages on Swedish and Finnish ferry lines had been reported to the agency before the Estonia sinking. The disaster might have been avoided, he said, “if the ship owners had followed the law and reported earlier close calls.” Ferry operators had been fighting legislation in several European countries that imposed tighter safety regulations on “Ro-Ro” (roll-on, roll-off) ships, first proposed in the wake of the sinking of the ferry Herald of Free Enterprise off Zeebrugge, Belgium, in 1987, in which 193 people died.

50 years ago: Military coup in Bolivia

Alfredo Ovando Candía, Bolivia’s leading military general, seized the office too of the presidency on September 26, 1969, in a bloodless coup, removing acting president Luis Adolfo Siles. After taking power Ovando announced that the new government would be one of “leftist nationalism.”

Ovando first emerged as a prominent figure in Bolivian politics in 1964 when he participated in a coup that placed René Barrientos as the head of state. Before Barrientos officially took office in 1966, Ovando ruled Bolivia with him in a military junta.

Barrientos quickly became despised by the Bolivian working class and peasantry after the massacre of militant miners at Siglo XX in 1967. His regime lost further support after the execution of Che Guevara made clear that Barrientos took his marching orders from the CIA. 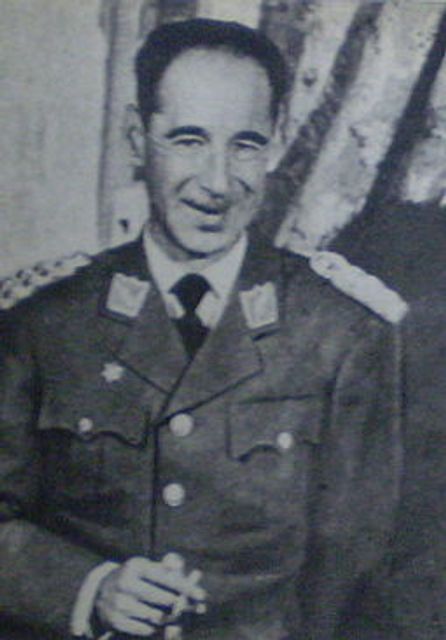 Ovando began to distance himself politically from Barrientos, planning to challenge him for the presidency in the 1970 election. Barrientos, however, died in a helicopter crash in April 1969, putting his Vice President Siles in control over the government.

Unsure of his chances at winning the elections against La Paz Mayor Armando Escobar, Ovando launched his September 26 coup to ensure he would take the office of the president. He sought to appease the petty bourgeois nationalist forces and unrest among the working class by making limited economic and political reforms. Most notable were the nationalization of US-owned oil companies and opening diplomatic relations with Cuba and the Soviet Union.

Ovando’s time in office would last just 13 months until October 1970, when the right-wing elements of the military, backed by the US, launched a coup to reverse his nationalizations. The coup was not successful in ousting Ovando. However, he would step down in the aftermath of the abortive coup, handing power to his ally General Juan José Torres, and effectively going into exile as Bolivia’s ambassador to Spain.

On September 28, 1944, divisions of the Soviet Red Army, along with Yugoslav partisans involved in the resistance to Nazi occupation, launched a major offensive aimed at expelling the forces of the Third Reich from Belgrade, the capital of Yugoslavia.

The operation took place amid a series of crippling defeats for the Nazis. Throughout 1944, Germany had lost vast swathes of territory, as the Red Army launched a series of offensives, aimed at ousting the Nazis from eastern Europe. This served to buoy popular resistance movements in the region and in southern Europe, and created a deepening crisis for collaborationist forces. Some governments that had been effectively aligned with the Germans, including Bulgaria, sought to adopt a position of neutrality aimed at sparing them in the event of a full-blown Soviet victory. 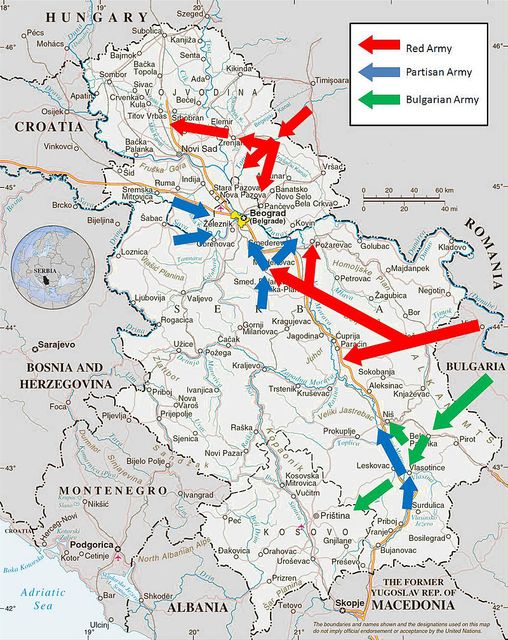 Map of the Belgrade Offensive

On September 28, the Soviet 57th Army began a southern approach to Belgrade, with the assistance of Yugoslav partisans, along with the 68th and 64th rifle corps. The coordinated attack gave the Red Army tactical supremacy on the combat line that had emerged, and facilitated the capture of a series of towns and cities, including the liberation of Negotin on September 30.

The attack followed heavy German defensive operations after Soviet troops had initiated an eastern approach to Belgrade earlier in September.

The Soviet 4th Guards Mechanized Corps of the 3rd Ukrainian Front and the Yugoslavian 12th Corps would be the first divisions to reach Belgrade on October 14, having breached the southern defenses of the city. Over the following days, intense street-fighting took place within the city, culminating in the evacuation of German troops beginning on October 19. The liberation of the strategically critical city provided a base of operations for the development of further offensives, including attempts to capture Budapest, the capital of Hungary.

The battle to seize Belgrade had involved up to half a million Soviet and Yugoslav partisans. The Soviets suffered almost 19,000 casualties, including 4,350 fatalities, while almost 3,000 partisans died.

On September 27, 1919, British soldiers began to withdraw from Arkhangelsk in northern Russia, close to the Arctic Circle. In October they would withdraw from Murmansk, still further north. American troops had withdrawn in June, as the imperialist drive to destroy the Bolshevik Revolution fell apart.

The Allied Northern Russian Expedition, which included British, American, Australian, Canadian and other troops, had come to support the counterrevolutionary White Armies and crush the young Soviet state in June 1918, as the First World War was ending. By 1919, the British contingent consisted of 18,400 men.

It had been the War Minister of the British government, Winston Churchill, who demanded the Bolshevik “baby” be strangled in the crib. Not only in northern Russia but on all fronts the counterrevolution was, as Trotsky said at the time, kept alive by “the tireless work of British gold and British weapons.”

Nevertheless, the occupation provoked opposition in Britain—an official British military document of 1920 about the withdrawal speaks of the “pressure of public opinion.” Allied troops in Arkhangelsk and Murmansk were stricken by disease and bitter cold. Bolshevik propaganda leaflets in English were scattered on the streets or nailed to trees asking soldiers, “What are you fighting for?” American and British soldiers were further demoralized as they came to understand that the population of the city was pro-Bolshevik. 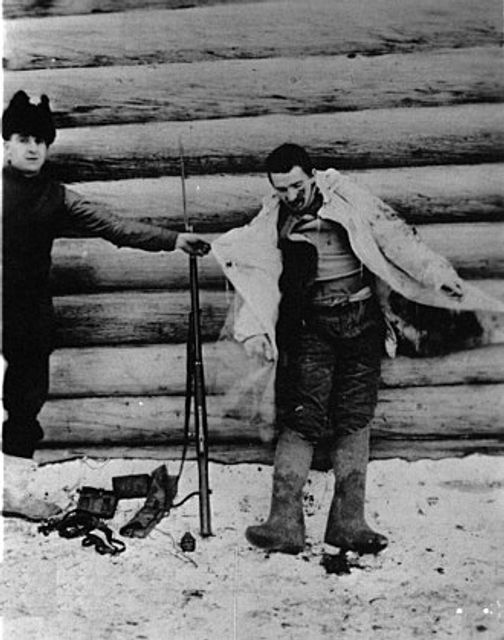 The British commander of the Northern Expedition wrote many years later that, “We were drawing terribly near to the end of our tether as an efficient fighting force.”

The counterrevolutionary White armies in North Russia were so demoralized that their forces in Arkhangelsk were regularly on the verge of revolt. In the late spring of 1919, when a commander of the White forces announced to his troops that anyone who sympathized with the Bolsheviks was free to join them, nearly 6,000 defected.

The White government did not collapse immediately after the British withdrawal. but began to disintegrate by the beginning of 1920. On February 21, 1920, Red Army troops occupied Arkhangelsk and Murmansk.