An estimated 170,000 people joined protests across New Zealand yesterday in the country’s third Climate Strike this year. The turnout represents 3.5 percent of the country’s population. It followed global protests over the past week which drew millions of people and reflected growing anger among young people and workers over governments’ inaction in the face of catastrophic climate change.

Without a globally coordinated effort to drastically reduce carbon emissions and restore ecosystems, the world faces devastating sea level rises and mass extinction of species. Many of those marching in New Zealand said they were inspired by Swedish climate activist Greta Thunberg’s speech at the United Nations, where she denounced governments for failing to act, betraying young people and caring only about money. 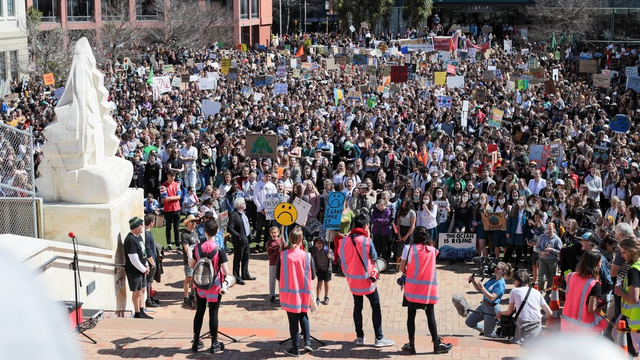 The Climate Strikes have been organised and led by high school students. This time, however, they were joined by tens of thousands of university students and workers. Protests were held in 40 locations, including Auckland, Wellington, Christchurch, Dunedin, Hamilton, Whanganui, New Plymouth, Palmerston North, Gisborne, Hamilton and small towns such as Karamea and Dunsandel.

The protests were among the largest in living memory. In Auckland as many as 80,000 people filled Queen Street and Aotea Square and blocked access to the port. An estimated 40,000 people protested outside parliament in Wellington—roughly 10 percent of the population of Wellington and nearby Porirua and the Hutt Valley.

The protest united people of many nationalities, including significant numbers of Pacific Islanders. Low-lying island countries are among those most vulnerable to climate change.

Acting Prime Minister Winston Peters, from the right-wing nationalist New Zealand First Party, denounced the strikers, telling Radio NZ: “Not being at school and not being taught lessons is not what young people should be doing.”

The strike nonetheless had an officially-sanctioned character. Leading School Strike 4 Climate (SS4C) organisers are close to the pro-business Labour Party and the Green Party, which both govern in a coalition with NZ First. SS4C welcomed participation by approximately 90 businesses in yesterday’s strike, including major electricity company Meridian Energy and the Co-operative Bank, which used the strike as an advertising opportunity.

An open letter delivered to parliament, signed by over 13,000 people, demanded an “ambitious” Zero Carbon Act with an enforceable target of zero emissions by 2040, an end to all fossil fuels extraction, and investment in “sustainable industries.”

James Shaw, Greens co-leader and climate change minister, spoke outside parliament and said he would be “open to ways to bring net zero carbon into place by 2040 if the political consensus allowed.” Speaking at the United Nations General Assembly this week, Prime Minister Jacinda Ardern proposed the removal of subsidies for fossil fuels so that “green energy can compete on an even footing.”

In fact, governments internationally have no serious policies to address climate change because these would run up against the interests of the multi-billion dollar corporations which control politics. New Zealand is no exception. Its agriculture industry, which accounts for half the country’s greenhouse gas emissions, would be exempt from 95 percent of charges under a proposed expansion of the pro-business Emissions Trading Scheme (ETS).

The Socialist Equality Group (New Zealand) spoke with protesters in Wellington and distributed the statement “The only solution to climate change is world socialism,” a message that resonated with many.

Cassie, a public policy and international relations student, said: “I’m angry at the government and the world for not taking any action on something that’s going to affect everyone. I’m angry that they’ve put capitalism first and that it’s always going to be money, until it’s too late. We need a complete change of the economy so that it’s not focused on extracting and ruining the earth’s resources.” 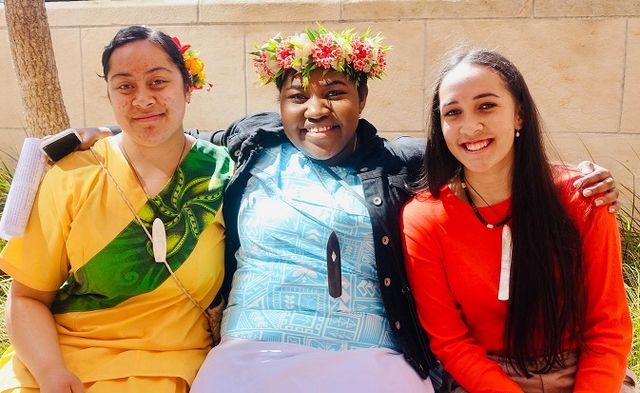 Jo, a student at Victoria University of Wellington whose family is from Tokelau and the Solomon Islands, said she was protesting for their future survival. Both Pacific island countries are at risk from rising sea levels. Low-lying villages are being forced to relocate as land is steadily eroded.

“I’m seeing the effects that it’s having on our family, being scared of having a natural disaster,” Jo said. “If the internet is cut off we can’t get in contact with them. It’s pretty stressful sometimes.”

She and her friends were angered by Australian Deputy Prime Minister Michael McCormack’s statement that Pacific Islanders affected by climate change could “come here and pick our fruit.” Jo said this “reinforced negative stereotypes and was kind of racist. That really hurts people.”

She continued: “It’s just business, they don’t really care. They’re just trying to make money. Not everything is about money. Decades from now, what is money going to mean? It’s nothing.” She called on people to “educate themselves” and have compassion for those affected by climate change. 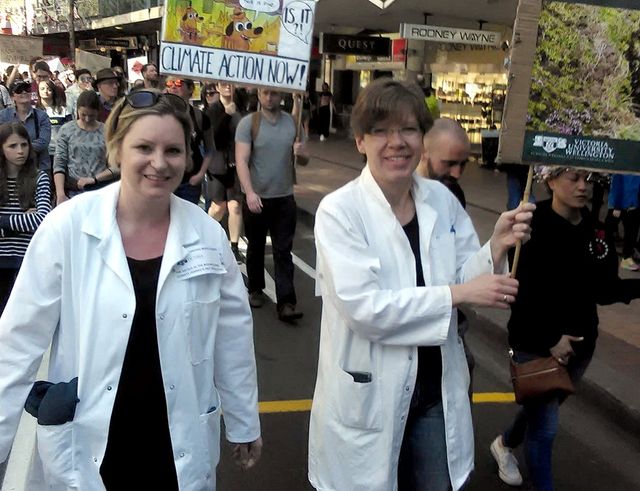 Shelley Fischer, on the left

Shelley Fischer was part of a group of postgraduate students from Victoria University of Wellington’s School of Biological Sciences. Climate change, she said, was based on “facts, so we shouldn’t have to be protesting to do something that’s going to affect all of our futures. Most of us, as scientists, feel quite hopeless sometimes, but we can’t stop trying.” 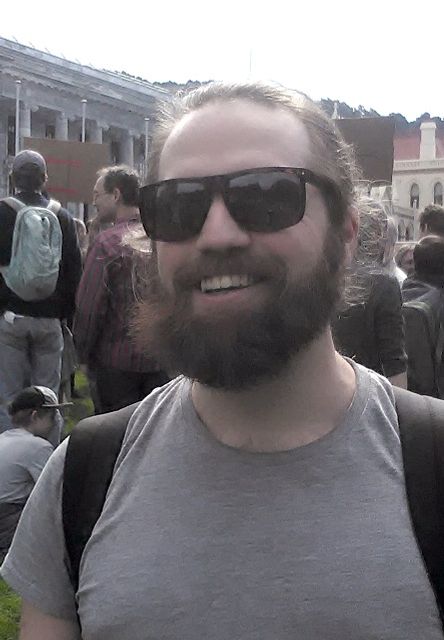 She called for “collective action to reduce the amount of carbon,” including limiting consumption of meat and travel. Government action so far was “not enough, there needs to be stricter environmental protection and they need to be supporting citizens to be able to make changes,” such as making electric cars widely available. She added that “First World countries have done a lot of the damage, so we have to be prepared to stand up and support Third World countries that need help to achieve their goals.”

Jason, also a VUW student, said “economic interests” were preventing action to address climate change, including the exemption of farming from the ETS. “Socialism makes sense to me. I hear people saying it’s unrealistic, but I don’t see why that would be the case. It’s the right step. I want to be optimistic. I think the turnout today, and this is happening everywhere else in the world, is a reason for optimism.”