This past week the bitter political conflict in Washington reached a new and explosive stage.

The Democrats are moving forward with an impeachment inquiry centered on Trump’s July 25 phone call with Ukrainian President Volodymyr Zelensky, during which Trump urged an investigation into Hunter Biden, the son of former Vice President Joe Biden, a leading contender for the Democratic presidential nomination in 2020.

More than half of all representatives in the House have signaled their support for the impeachment inquiry announced by House Speaker Nancy Pelosi on Tuesday.

Trump responded Friday by demanding the resignation of the head of the House Intelligence Committee, Democrat Adam Schiff, while threatening physical violence against those responsible for leaking information on the Zelensky phone call. He told a group of career State Department officials in New York, “You know what we used to do in the good old days…with spies and treason, right?”

This language, with its allusion to purges and executions, testifies to the degree of political crisis gripping the ruling class and the state. 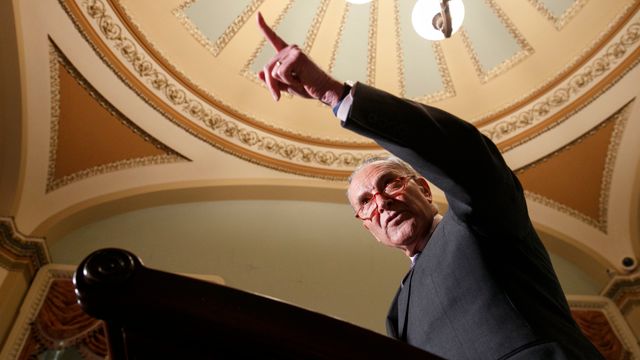 Senator Chuck Schumer of New York speaking to the media on the impeachment inquiry on President Trump in Washington [Credit: AP Photo/Jacquelyn Martin]

How the conflict plays out in the coming weeks and months remains to be seen. The Democrats have indicated that they want to proceed with the inquiry quickly, with a recommendation delivered as early as November. If Trump is impeached by a majority vote in the Democratic-controlled House (the equivalent of an indictment), the case would then be tried by the Senate, which is controlled by Republicans. A two-thirds majority is required in the Senate for conviction and removal from office.

The critical question for the working class is to clearly define the social and class forces involved, and to elaborate its own, independent attitude.

This is a conflict between two reactionary factions of the ruling class. On the one side is the Trump administration, a vicious enemy of the working class. In his three years in office, Trump has sharply escalated the bipartisan program of social counterrevolution at home and militarism abroad. The Trump administration has constructed concentration camps and detained tens of thousands of immigrants, denied asylum rights to refugees, cultivated far-right and fascistic forces, elevated the military in domestic affairs, rejected congressional oversight, and attacked socialism as the greatest threat to the future of the country.

It is not on the basis of any democratic issue that the Democrats have opposed Trump, however. Rather, they speak for powerful sections of the military and intelligence apparatus that have lost confidence in the ability of the Trump administration to carry out the foreign policy agenda of the ruling class.

The scandal over the Ukraine call has been instigated by the intelligence agencies. It was a CIA agent in the White House who prepared the report that is the basis of the inquiry. It was the decision by a group of Democrats drawn from the military and intelligence agencies that led Pelosi and Schiff, both with longstanding ties to these same agencies, to shift from their previous opposition to impeachment.

The Democrats have made clear that they intend the impeachment inquiry to be exclusively focused on Ukraine and Trump’s undermining of US “national security”—that is, the basic strategic imperatives of American foreign policy. For this reason, the inquiry will be carried out by the House Intelligence Committee and its chairman, Schiff.

The Washington Post reported on Friday that Democratic leaders “are eyeing a fast-paced investigation.” A meeting of the Democratic caucus “urged the leadership to keep the messaging around impeachment on national security and the Ukraine probe” led by Schiff, “not on the litany of potential Trump offenses investigated by other panels, including the House Judiciary Committee, which traditionally takes the lead in impeachment proceedings.”

Some senior Democrats, the Post reported, “are even arguing that other committees should forego potentially explosive hearings that could distract from the intelligence panel’s work.” There will be “very few hearings, if any,” according to a senior Democratic Party aide, with most of the investigation taking place in “closed-door interviews.”

The Democrats do not want a repeat of the Watergate investigation into Richard Nixon, with its extensive public hearings, broadcast live on television. They are even sidestepping a full vote in the House to authorize the initial inquiry, as was done in the impeachment drives against both Nixon and Bill Clinton.

The principal fear of the Democratic Party is that the conflict within the ruling elite, circumscribed within a narrow framework, will stir up the already volatile social and political situation in the country.

The New York Times, in its editorial Friday morning, spelled out these concerns. The newspaper declared that it has opposed Trump “not only because of his personal transgressions, divisiveness and dishonesty, but also because of the substance of many of his policies—on the environment, immigration, taxes, trade and other matters.” But then it insisted that “provided Mr. Trump was acting within the law, he had the absolute right to pursue his chosen course and be judged upon it by the electorate, one way or another, in 2020.” [Emphasis added].

The impeachment inquiry, the Times wrote, should remain confined to the Ukraine phone call and “the integrity of the next election.” The latter means connecting Ukraine to the allegations of Russian “meddling” that have been at the center of the Democrats’ opposition to Trump since the beginning of his administration.

Beyond Ukraine and Russia, the Times concluded, “much of Mr. Trump’s behavior should remain outside the scope of the inquiry.”

The Democrats are seeking to frame the Ukraine issue as an extension of their neo-McCarthyite anti-Russia campaign. Pelosi argued along these lines in an interview with MSNBC on Friday morning. After noting that she “prays for the president all the time,” Pelosi declared, without evidence, that “Russia has a hand in this.”

In June 2017, the WSWS defined the methods of the Democrats as those of “palace coup”—involving “behind-the-scenes plotting with elements within the military/intelligence establishment and corporate-financial elite.” They are following the same playbook in the present stage of the conflict.

This lends the Democrats’ operation a shabby character. The Ukraine business hardly casts the Democrats in a positive light. After all, Hunter Biden was indeed involved in underhanded operations in Ukraine, where he used his family connections to secure a highly paid position in a corporation run by a corrupt Ukrainian oligarch. Joe Biden’s intervention in Ukrainian politics in 2016 against a prosecutor investigating the company has its own gangster-like character. It is a world of diplomacy and intrigue in which both parties participate.

The warring factions in Washington express in different forms the terminal crisis of American democracy. The cesspool of reaction is the product of unending war, the criminalization of foreign policy and the extreme growth of social inequality. Trump himself is not the cause, but rather a symptom of the disorientation and desperation of the ruling class in the face of a series of geopolitical, economic and social crises for which it has no solution.

The immediate backdrop for the eruption of the impeachment crisis is a series of geopolitical debacles for US imperialism. The CIA-backed regime-change operation in Syria has failed. The Trump administration, facing a disastrous stalemate in Afghanistan, sought, and then rejected, negotiations with the Taliban. The regime-change operation in Venezuela has floundered.

On top of this, the economy is heading toward recession, with Trump pursuing trade-war measures against China and Europe and launching a war against the Federal Reserve, a principal instrument of the financial elite.

Trump is more and more openly adopting the language of fascism as he intensifies his persecution of immigrants. On these questions, however, the Democrats are silent.

Any government brought to power through the Democrats’ maneuvers would, if anything, be even more directly controlled by the military and intelligence agencies. And it would be a government committed to escalating military operations in the Middle East as well as the confrontation with Russia.

The situation is fraught with danger. However, nothing is more dangerous for the working class than to leave the resolution of the crisis to the rival camps within the ruling elite.

The orientation of the working class must be to the growth of the class struggle. The strike by autoworkers at General Motors is the latest expression of the upsurge of social resistance in the United States and internationally. The population is moving to the left. With social inequality at its highest level in fifty years, there is growing opposition to capitalism and support for socialism.

The critical question is to impart to this movement of the working class a consciousness of its aims. A new political leadership must be built to guide these struggles to their logical and necessary end: the overthrow of the capitalist system and the establishment of socialism.