On Tuesday, the World Socialist Web Site Autoworker Newsletter spoke with workers outside the main Tesla production facility in Fremont, California, which employs roughly 10,000 workers from across the Bay Area and the surrounding region. The facility is the only major auto plant on the West Coast.

Tesla workers, who requested anonymity due to threats of retaliation by the company for speaking to the media, denounced the corporation for its brutal working conditions, low pay and punitive policies. Workers expressed solidarity with the 49,000 GM workers that have been on strike for the past 14 days.

One worker who spoke to the WSWS formerly worked at the New United Motor Manufacturing, Inc. (NUMMI) auto plant at the same location, which was jointly run by GM and Toyota from 1984-2010. “You’ve got to stick together and fight for what you need,” he said. “I think it’s a good cause. I know it’s going to be tough for them, but it’s worth it in the long run. I hope they can get what they want.” 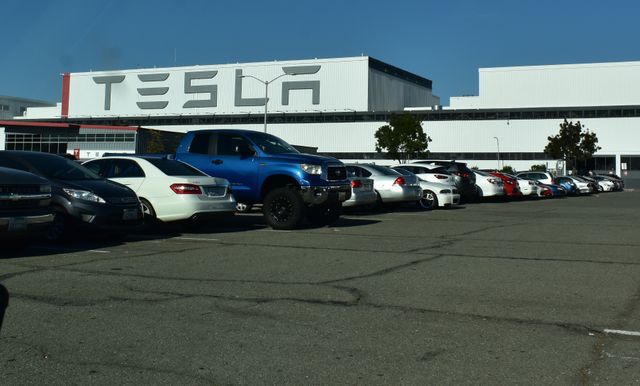 After discussing the auto companies’ use of lower paid, temporary part-time (TPT) workers, and the fact that GM is demanding a sharp increase in their numbers, he added, “They’re trying to take advantage of cheaper labor and not pay them benefits, and that’s not okay. GM just wants to make as much money as possible.”

The worker noted that the starting wage for a production line worker at Tesla is roughly $16 per hour. After two years, workers move up to a meager $18.75. This is nowhere near a livable wage in the Bay Area, where the median cost of rent is well over $2,500 a month in most cities.

A recent hire at the Tesla factory said, “Workers need to earn at least $20-something per hour to survive out here. Many workers commute two hours each way, many have roommates crammed in an apartment to afford rent, and some people live in their cars. When the commute is far, people get less sleep and are exhausted all the time, which makes our workplace more unsafe.”

When asked about the conditions at Tesla, he replied, “If you get a major injury, you might be seen right away, but if it’s something minor it might take a long time to be seen. They give us water at the stations, but it does get really hot in the factory because it’s not all air conditioned.” Over the past week, temperatures in Fremont surpassed 100 degrees, with temperatures even higher inside the plant.

Regarding the corruption scandal embroiling UAW officials, he said, “If there are bureaucrats that don’t work in the factory, they are going to be more inclined to see the interests of the company—not the workers. They can be much more easily manipulated by the company.”

Another young worker also commented on Tesla’s low pay and stringent demands on overtime work. “A lot of people here are underpaid. My biggest issue is the mandatory overtime. They make us work 12-hour shifts and then often we get called in to work Saturday. Even if we’re busy, we can’t say anything. They give you a point if you don’t show up, and eventually you’ll get fired if you get enough points.”

Since Tesla’s founding in 2003, the value of its stock has ballooned to $242 per share, compared to $37 per share for GM. Along with the rise in Tesla’s stock value, founder and CEO Elon Musk has amassed $23.1 billion, making him the 39th-richest person in the world. The inflation of Tesla’s stock indicates the long-term trajectory of the international auto industry, which is undergoing a transformation towards electric and autonomous vehicle production.

At present, each multinational auto corporation is competing with its rivals to acquire electric and autonomous vehicle startup companies, in an effort to achieve market dominance. Statista.com estimates that “between 2017 and 2025, the size of the global electric vehicle market is expected to increase almost five-fold to reach an estimated global market size of 567 billion U.S. dollars by 2025.”

Electric vehicle (EV) engines inherently use far fewer parts, and in total require roughly 40 percent fewer labor hours to produce, which is one of the underlying causes of the global wave of layoffs of autoworkers that began in 2018.

In their spring 2019 white paper, the UAW focused exclusively on EVs and the looming threat they pose to traditional autoworker jobs. They noted worryingly, “The production of new EV components could shift business and employment to non-auto companies that lack a large U.S. manufacturing base. This could undermine auto job quality by shifting work to employers with no history of manufacturing labor relations or to companies more likely to import components.”

In other words, transitioning to EVs poses the danger of auto jobs moving to non-unionized companies like Tesla, which would lower the number of dues-paying members propping up the UAW bureaucracy.

In the same white paper, the UAW presented their partnership with GM at the Orion Assembly Plant in a positive light, as part of their effort to pitch collaboration with the UAW in transitioning internal combustion engine (ICE) plants to EV. In reality, GM Subsystems workers at the Orion plant, which produces the Chevy Bolt, earn poverty wages of as little as $11 per hour, a product of the UAW’s collusion with GM against workers.

As part of the fallout of the 2008 financial meltdown and the forced bankruptcy of GM, the company backed out of its partnership with Toyota at the NUMMI plant in June 2009, prompting Toyota to back out as well, leading to the closure of the plant. The UAW did nothing to prevent this or other plant closures at the time, instead denouncing workers and attempting to channel opposition in a nationalist direction against Toyota.

In October 2010, Tesla took ownership of the site and began re-purposing it to produce their electric vehicles, steadily hiring more and more workers. In 2016, the UAW announced that it would seek to unionize Tesla workers, but they were unable to gain any significant foothold at the facility.

Workers rightfully recognized that the UAW would do nothing to improve their working conditions or living standards, having imposed decades of concessions contracts on autoworkers at the Big 3. As one of the workers noted, “the conditions now are about the same as before when it was NUMMI.”

To carry out a genuine struggle against the brutal conditions they face, Tesla workers must form their own, independent rank-and-file committees, to link up with striking GM workers and all autoworkers in the US and around the world.

The WSWS Autoworker Newsletter is actively facilitating the formation of such committees and will provide assistance to all Tesla workers seeking to organize with their coworkers.