On Wednesday, at least two million people in 34 counties across Northern California experienced the first deliberate mass power outage engineered by Pacific Gas and Electric (PG&E), the energy monopoly that controls the gas and electricity market for the northern two-thirds of the most populous state in the United States. PG&E has stated that the blackout may last for as long as a week.

Facing numerous lawsuits from the victims and survivors of the Camp Fire —the deadliest and most destructive wildfire in California’s history sparked by the utility’s downed power lines—and potentially $30 billion in legal liability from the hundreds of other recent wildfires for which it bears responsibility, PG&E filed for bankruptcy earlier this year. Instead of taking any proactive measures to eliminate the danger of wildfires, including transitioning from above-ground wooden electrical poles to steel poles or below-ground energy infrastructure, PG&E has decided to further impose the crisis on its customers through forced blackouts.

Having conducted similar forced blackouts on a smaller scale since October 2018, PG&E officially announced its decision to impose mass shutoffs on Tuesday afternoon. With less than 12 hours to prepare before the first shutoffs, thousands scrambled to purchase gasoline and emergency supplies, with reports of lines at gas stations extending multiple blocks. 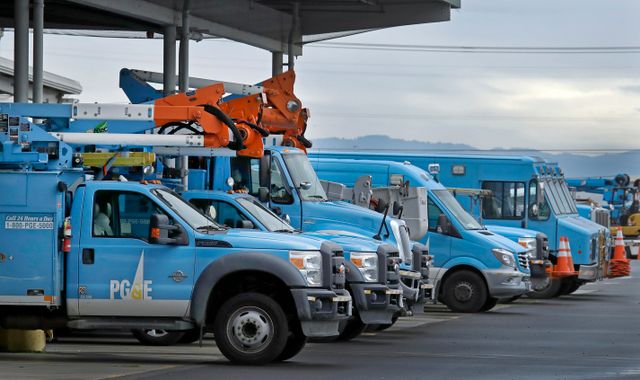 The full scale of the impact of this reckless maneuver is as yet unknown, but it has already disrupted the lives of millions and endangered thousands. PG&E’s Medical Baseline Program for customers with “special energy needs,” including medical devices that require electricity, merely states that these customers “may receive extra notifications [prior to a shutoff] which may include additional phone calls or a door knock to ensure they’re aware and can make preparations to stay safe.” With such loose guidelines in place, potentially thousands of disabled or vulnerable customers are at risk of death or injury as a result of PG&E’s mass shutoff of power.

PG&E stated that the power outage will impact at least 800,000 “customers,” or accounts, while also noting that “any of PG&E’s more than 5 million electric customers could have their power shut off because the energy system relies on power lines working together to provide electricity across cities, counties and regions.”

In total, PG&E’s 5.3 million accounts cover 16 million people, meaning that each account represents roughly three people. Thus, roughly 2.4 million people may be directly impacted by the ongoing power outages, while all 16 million face the possibility of losing power. PG&E’s website for customers to search whether their address will be impacted has been down most of the time since the announcement Tuesday, leaving millions unsure whether their homes will have power.

PG&E first cut power to 22 counties at midnight Tuesday, impacting 513,000 customers, or over a million people. On Wednesday evening, parts of seven more counties had their power shut off, impacting an additional 234,000 accounts, with a third phase of shutoffs considered for the remaining counties, the blackout thus covering almost the entire northern half of the state.

Citing a National Weather Service “Fire Weather Watch,” PG&E warned of “a potentially widespread, strong and dry wind event Wednesday morning through Thursday afternoon,” with winds predicted to reach 20-30 miles per hour with gusts up to 50 miles per hour in some areas. Given that there has been little rain in California in recent months, the potential exists this year for deadly wildfires to again hit the state, as they did in 2017 and 2018.

As numerous posts on social media have emphasized, there have as yet not been any reported significant wind events in the heavily-populated Bay Area region or other areas outside the Central Valley region of the state, which nevertheless have endured mass outages. Very few places where power has been cut have experienced wind gusts above 40 miles per hour. A couple of very small wildfires have broken out in El Dorado County and Tehama County, and have already been suppressed by firefighters.

California residents have expressed outrage at PG&E’s forced shutoffs, with the hashtag #poweroutage trending on Twitter. One commented, “How many more people are going to die from the #poweroutage due to traffic collisions, medical neglect, dehydration and exposure than from the wildfires? This isn't preventing disaster, this is creating one.” In response to this public backlash, PG&E installed a set of barricades outside its San Francisco headquarters.

While the company has insisted that the power cuts may last for up to one week, it has announced no definitive timeline in place for restoring power. PG&E states that before restoring power they must inspect all of their equipment for damage after the wind event. Local officials, including the mayor of San Jose, have also told residents to brace for an entire week without power.

Numerous university campuses, including the University of California Berkeley and at least 18 school districts in the affected areas, closed some or all of their schools. Other, more financially strapped districts, including Oakland Unified School District (OUSD), are closing some schools but forcing teachers to continue working in the dark Thursday and Friday.

In San Jose and Santa Clara County, officials have each declared a local “state of emergency” due to the high number of traffic accidents and emergency responder calls. In Morgan Hill, police imposed a curfew starting at 7 p.m. Wednesday until the following morning, with no specified punishments for those who violate the curfew.

The mass power shutoffs underscore the complete bankruptcy of the capitalist system, in which all resources, production and services are subordinated to the profit interests of the capitalist class. Decades of financialization and the subordination of essential services to the profit interests of Wall Street and the Financial District in San Francisco, where PG&E is headquartered, have produced this crisis.

In the richest state of the richest country on earth—which is home to 157 billionaires with a combined wealth of over $750 billion—basic infrastructure is in such disrepair that it cannot withstand winds that are in no way extreme.

Responsible for sparking over 2,000 fires from 2014-17 alone, the state’s utility monopolies—PG&E in the north, Southern California Edison and San Diego Gas & Electric in the south—have done nothing to modernize their equipment or prepare for the long-predicted impact of climate change. Subordinated to private profit, the monopolies have chosen to impose sweeping blackouts instead of investing in critical infrastructure and transition to renewable energies.

California Governor Gavin Newsom, a Democrat, endorsed PG&E’s blackout policy, stating, “I do believe with the limited number of tools in the toolkit what they’re doing is appropriate under the circumstances.” California has long been controlled by the Democratic Party, which has facilitated PG&E’s criminal negligence and parasitism and will continue to do so going forward.

One possible motive for the widespread character of the current blackout, despite the small threat posed in most regions affected, is that PG&E is sending a message to state Democrats that it will continue mass blackouts as long as it faces legal liability for wildfires. All three utility monopolies in California intend to expand their usage of forced blackouts this fire season, and state Democrats will undoubtedly extend a legislative offer that suits both parties’ interests.

PG&E’s imposition of mass electricity shutoffs underscores the unplanned, anarchic character of the entire capitalist system. With the potential for a wind storm across a dry region that threatened to implicate them in yet another disaster, at the last minute this energy behemoth decided—without any public discussion or placement of alternative energy systems for those most in need—to place the lives of thousands at risk.

The utility is setting a precedent which it will repeat with increasing regularity. PG&E spokesman Denny Boyles told the SF Chronicle that the company expects more power shut-offs “will be necessary this year based on past weather events.”

Rather than face liability for disasters or invest the needed billions in overhauling their infrastructure it will simply cut off electricity for millions of people, and then continue to charge them exorbitant rates for its monopolized services at the end of the month.

Unless PG&E is taken out of the hands of its shareholders and transformed by the working class into a democratically-controlled public utility run for social need, not private profit, the California blackouts will become the new normal.