Crisis mounts over Turkish offensive against Kurdish forces in Syria

The Turkish military invasion of northern Syria, now in its third day, has unleashed a mounting political firestorm in Washington. Leading Republicans, along with Democrats and elements within the US military, have sharply condemned US President Donald Trump for green-lighting Ankara’s action and abandoning the Kurdish-dominated Syrian Democratic Forces (SDF), which served as Washington’s proxy force in the so-called war against ISIS.

Turkish forces, backed by the largely Sunni Arab and Turkmen militias of the so-called “Syrian National Army” have opened up their offensive with incursions close to the towns of Tal Abyad and Ras al Ain, both east of the Euphrates River.

Heavy fighting was reported between the Turkish military and units of the Syrian Kurdish YPG militia, along with civilian casualties on both sides of the border. The Turkish advance has been supported by aerial bombardments and artillery fire. The Syrian state news agency Sana reported 16 civilian fatalities in three towns, including that of an 11-year-old boy. 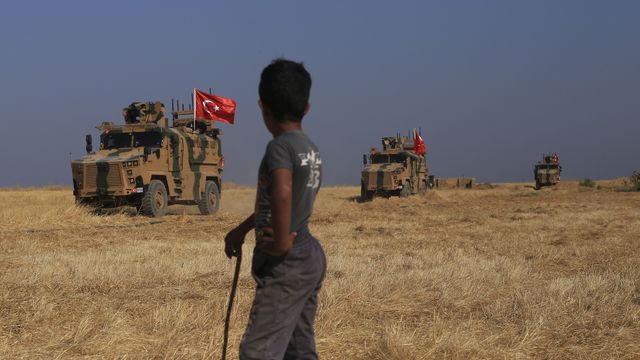 Turkish armored vehicles patrol as they conduct a joint ground patrol with American forces in the so-called "safe zone" on the Syrian side of the border with Turkey, near the town of Tal Abyad, northeastern Syria, Friday, Oct.4, 2019.

The Kurdish forces responded with their own barrages of mortar bombs which claimed the lives of four Turkish civilians, including a baby, in the town of Akcakale, which is separated from Tal Abayad only by the Syrian-Turkish border.

In a speech to leaders of his Justice and Development Party (AKP) Thursday, Turkish President Recep Tayyip Erdoğan claimed that Turkish forces had killed 109 “militants” in the first two days of fighting.

The areas targeted by Turkey are controlled by the Kurdish-dominated SDF, but are populated predominantly by Syrian Sunni Arabs. When the area was previously overrun by the Al Qaeda-linked Al Nusra Front—which served as the leading ground force in the US-backed war for regime change in Syria—Kurdish civilians were expelled under threat of death.

Tens of thousands are once again fleeing the area to escape the fighting and in fear of another round of ethnic cleansing, this time at the hands of Turkey and its local allies.

Turkey’s stated war aims include driving the SDF and YPG—which Ankara regards as terrorist organizations and branches of the PKK, the Turkish Kurdish organization against which it has fought a protracted and bloody decades-long counterinsurgency campaign—away from the Turkish border.

In their place, the Turkish regime intends to create a so-called “safe zone” stretching 300 miles long and 30 miles deep inside Syria’s northern border. Its intention is to repopulate this zone with the 3.6 million Syrian refugees now living in Turkey. Such a massive operation would inevitably entail driving Syrian Kurds away from the Turkish border.

Ankara’s decision to launch the cross-border offensive came only after an October 6 telephone conversation between Erdoğan and Trump in which the US president announced his withdrawal of some 50 to 100 US troops that had been deployed in the border area alongside the SDF Kurdish fighters, serving as an impediment to any Turkish incursion.

Fox News, which generally spouts pro-Trump propaganda, carried a report by its Pentagon correspondent citing a “well-placed senior U.S. military source” as stating that the US president went “off script” in the course of his call with Erdoğan. According to the source, Trump had been given talking points that included a demand that Turkish troops remain north of the Syrian border.

Fox also quoted the source as saying that Trump had repeatedly expressed the position that Washington should “Just let the Turks do it” in terms of pursuing their aims in northern Syria.

Trump subsequently issued orders to the US military to stay out of the conflict, even as the SDF requested that the Pentagon provide air support.

In a tweet Thursday, Trump defended his decision to pull back the US troops, while claiming that he was prepared to respond with sanctions against any Turkish war crimes:

“Turkey has been planning to attack the Kurds for a long time. They have been fighting forever. We have no soldiers or Military anywhere near the attack area. I am trying to end the ENDLESS WARS. Talking to both sides. Some want us to send tens of thousands of soldiers to.......the area and start a new war all over again. Turkey is a member of NATO. Others say STAY OUT, let the Kurds fight their own battles (even with our financial help). I say hit Turkey very hard financially & with sanctions if they don’t play by the rules! I am watching closely.”

At a news conference on Wednesday, Trump justified his action by insisting that Washington had spent “tremendous amounts of money” in arming and funding the SDF. He went on to criticize the Kurds for not having fought alongside the US in World War II. “They didn’t help us with Normandy as an example.”

In a closed-door emergency session of the United Nations Security Council Thursday to consider the Turkish invasion of Syria, US Ambassador Kelly Craft did not join European representatives in criticizing Ankara’s intervention, but merely echoed Trump’s vague suggestion that Turkey should “play by the rules”.

For his part, Erdoğan responded to criticisms from Europe Thursday by threatening to “open the doors and send 3.6 million refugees to you.”

Trump’s decision, which was taken without any warning to the Pentagon or US allies involved in the intervention in Syria, has provoked sharp dissension within the top ranks of the US military.

The Washington Post described senior Pentagon officials as “blindsided” by Trump’s decision, with one administration official stating: “To say the military is very angry about this is an understatement.”

This found unmistakable expression in a denunciation by Gen. Joseph Votel, who retired just last March as the commander of US military forces in the Middle East.

“This policy abandonment threatens to undo five years’ worth of fighting against ISIS and will severely damage American credibility and reliability in any future fights where we need strong allies,” Votel wrote in The Atlantic. He added, “The SDF freed tens of thousands of square miles and millions of people from the grip of ISIS. Throughout the fight, it sustained nearly 11,000 casualties.”

Trump has also come under fire from both Democrats and some of his closest Republican supporters on Capitol Hill, who see the troop pullback not merely as a betrayal of the Kurdish SDF, but more decisively from their standpoint, a retreat from US military aggression that could strengthen the positions of Russia and Iran.

Such a sanctions regime would further sour US-Turkish relations, which have been badly strained since an abortive US-backed coup in 2016, followed by Ankara’s purchase of Russian S-400 air defense systems and Washington’s retaliatory ban selling Turkey F-35 fighter jets.

Speaking on Fox News Wednesday, Graham condemned Trump’s decision to pull back the US troops in Syria, describing it as “the biggest mistake of his presidency.” He added that “every military person has told him don’t do this.”

Trump dismissed Graham’s criticisms, declaring, “I think Lindsey would like to stay there for the next 200 years and maybe add a couple a hundred thousand people every place.”

Meanwhile Rep. Adam Schiff, the chairman of the House Intelligence Committee, which is leading the impeachment inquiry over Trump’s call with the president of Ukraine, indicated that the panel would also take up the conversation with Erdoğan and Trump’s decision on Syria, which he described as “impulsive and dangerous.”

The Democratic Party has based its opposition to Trump and its impeachment inquiry exclusively on issues of “national security,” reflecting the positions of his opponents within the military and intelligence apparatus. It has denounced the US president for an insufficiently bellicose policy toward Russia as well as his moves to withdraw US troops from Syria and Afghanistan.

This has allowed Trump to employ nationalist and populist demagogy, posturing as an opponent of Washington’s deeply unpopular and never-ending wars, even as he has increased military spending to record levels in preparation for far bloodier conflicts, including a military confrontation with China.

In the end, it is far from clear that the US is withdrawing from Syria. The pullback of the small number of troops deployed on the border, still leaves over 1,000 American soldiers in the country. It should be recalled that Trump similarly ordered a full withdrawal from Syria last December, only to reverse the decision under strong pressure from the Pentagon and after the resignation of then-Defense Secretary Gen. James Mattis.