Homeless deaths rise more than 20 percent in England and Wales

Figures recently published by the Office for National Statistics show that 726 homeless people died in England and Wales in 2018, a rise of 22 percent on 2017. This is the highest recorded death-toll since reporting began and it is expected that the number will be higher for 2019.

The highest number of deaths in 2018 occurred in London and the North West of England, standing at 148 and 103 people respectively, though there have been increases in deaths in the other parts of the UK.

These deaths come at a time when there have been repeated cuts to local authority budgets in the last decade, with many frontline services bearing the brunt of substantial cuts. 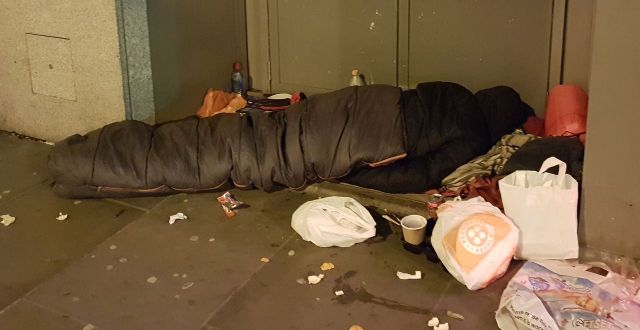 Jon Sparkes, chief executive of the Crisis homelessness charity, commented, “It’s heart-breaking that hundreds of people were forced to spend the last days of their lives without the dignity of a secure home.”

Jessica Turtle from the Museum of Homelessness, a community driven social justice museum, said that people were mainly dying from drug and alcohol misuse, which is directly linked to cuts in services. “A lot of these deaths are preventable,” she said.

There is mounting concern over the dangers associated with the use of the synthetic cannabinoid Spice, known on the streets as Black Mamba.

The number of drug related deaths rose by 55 percent compared to 2017, with 131 deaths related to opiate poisoning, via heroin and morphine use, and the numbers of deaths from cocaine use increasing from 15 in 2017, to 30 in 2018.

John Hamblin CEO of Plymouth’s largest homeless charity, Shekinah Mission, spoke out recently about the deaths of homeless people, linking these deaths to cuts to funding from central government impacting on vital services for homeless people.

“Plymouth is doing some really good work but these figures are not any reflection on the efforts being done locally… Quite simply if you divest money from drug treatment services people will die.”

He went on to say, “You can’t remove that much money from local councils who worked to keep people off the streets and it not have a negative effect. This is not salami slicing—it’s amputation.”

In Middlesbrough in August this year, the deaths of five homeless people were linked to the redeployment of council staff in April. The council team, “Breaking the Boundaries,” had employed three dedicated workers to provide intensive support to rough sleepers living on the streets. Susan Gill, a community worker who runs the Neighbourhood Welfare homeless hub, and homeless cafe, said five homeless people she fed and helped at her homeless café on Princess Road in Gresham have died in the town since Breaking the Boundaries officers were removed.

Gill went on to say that the introduction of the draconian Universal Credit welfare payments had plunged many people into poverty, leaving them vulnerable to homelessness and mental health problems.

The number of homeless people dying in 2018 were just some of the 4,677 people who were classed as sleeping rough in England in the autumn of 2018, according to government figures. The figure for rough sleepers in 2018 was lower than the year before but is double that recorded in 2010.

The official rough sleeping figure is a vast underestimation of the real scale of homelessness. Last year, the Shelter housing charity estimated that there are at least 320,000 people in Britain sleeping rough or in temporary accommodation. Even this is a lower end estimation with the organisation explaining that its estimate does not include “sofa-surfers” and those sleeping in sheds, cars, etc.

A report published this year by the homeless charity St Mungo’s, “Dying On The Streets,” showed the depth of the problems homeless people face when trying to access services. It was based on a national street outreach survey carried out across several providers of street outreach services in March-April this year. 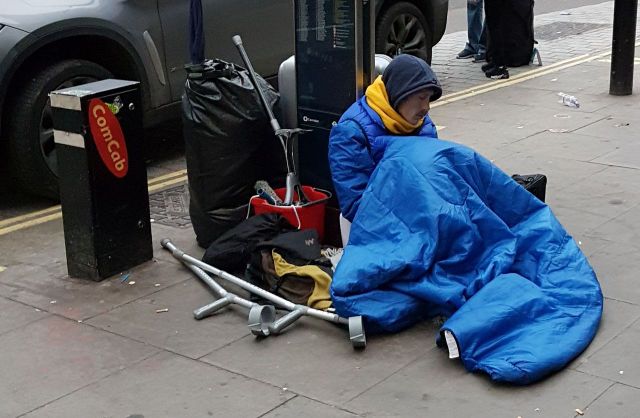 A homeless man near Euston railway station in London

There were also significant problems with access to emergency accommodation, with 64 percent of respondents saying this had become harder compared to five years ago.

In respect of funding, only 21 percent of respondents had seen a real terms increase in their funding in the last five years, while 31 percent had reported a funding decrease, despite an increase in people sleeping rough.

The report points to the fact that those who are dying on the streets of Britain are some of the most vulnerable in society, requiring specialist services and extra support.

The numbers of those dying who had mental health problems shows a significant increase. Rough sleepers who had died in London since 2010, who had had their support needs previously assessed, showed that nine in 10 required support for their mental health or drug/alcohol problems.

Research carried out by the YMCA involving 84 local authorities across the UK showed that funding for youth services will reach its lowest level in a generation. In 2010, the average spend on youth services was £7.9 million, but, after being ravaged by a decade of austerity cuts, the planned average to be spent for the years 2019/20 is a tiny £2.45 million—a 69 percent reduction.

A third of local authorities (29 percent) plan cuts that would see their spending slashed by 80 percent since 2010/11. This includes Liverpool at 86 percent, Southampton at 94 percent and Gateshead at 96 percent.

The YMCA research points to a future catastrophe facing youth services in many areas of Britain, with 8 percent of local authorities reporting that planned cuts for the current year will represent a 90 percent reduction in spending, decimating services for youth.

The imposition of cuts to local authority budgets via central government has left many local councils—mainly Labour-run who have faithfully passed these on at the behest of the Tories—struggling to deliver essential services. According to the Institute for Fiscal Studies (IFS), council spending on local services has fallen by 21 percent since 2010.

Cuts have been disproportionate across services within local council areas, with spending on children’s and youth services cut by 60 percent, planning housing and development down by more than 50 percent and highways transport and cultural and leisure services down by more than 40 percent.

The IFS report points to concerns that the current system of raising revenues that most local authorities are dependent upon, including business rates and council tax, will become seriously compromised in future, and would leave local authorities unable to meet basic financial commitments to running services.

For example, if council tax were to be increased by 4.7 percent year on year, (the average for this year), half of the money from these taxes alone would account for the entire budget just for adult social care by the mid-2030s. This calculation includes no accounting for increases in service provision, including in public health, housing and children’s social care.