“PG&E should be nationalized”: Berkeley students and residents denounce forced blackout in California

On Monday, members of the International Youth and Students for Social Equality (IYSSE) at UC Berkeley spoke to students and Berkeley residents about the mass blackout imposed by Pacific Gas and Electric (PG&E) across Northern California last week. The power outage, which affected over two million people and businesses, lasted up to four days in some places and likely caused many premature deaths.

Jazmín, a senior studying Political Science, spoke at length about the shutoffs and PG&E’s history of corporate negligence. Having grown up in Santa Rosa, an hour north of the Bay Area, and experiencing firsthand the devastating 2017 Tubbs Fire, she had been profoundly impacted by the utility monopoly’s criminality. 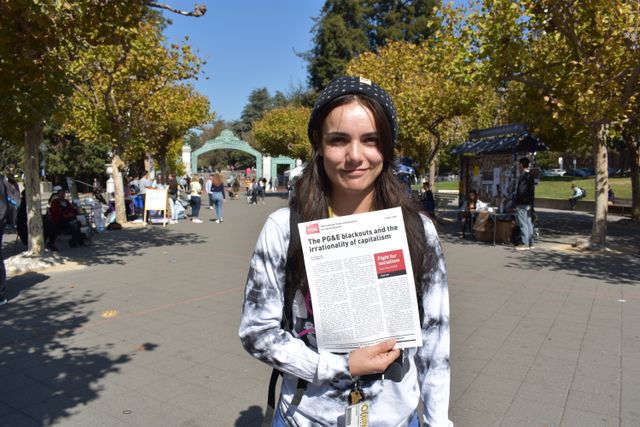 Given her close personal connection to the events, Jazmín was compelled to research the history of PG&E and its lobbying efforts. The results of this effort were published in an article last spring in the University of Southern California’s Journal of Law and Society .

“For a long time, PG&E has been accused, charged, and convicted of not fulfilling their responsibility to the public of maintaining their utility lines,” Jazmín noted. “As a privately owned utility that serves the public, that’s their obligation. They’ve been fined, they’ve been criminalized, and they’re still allowed to continue in operation, and it’s wrong.”

Jazmín read a quote from her article, which explains: “In 1997, PG&E was convicted of 739 counts of criminal negligence for failing to trim trees near its power lines after the corporation diverted $80 million from maintenance programs into shareholder profits.” Commenting on this conviction over 20 years ago, Jazmín noted, “they’ve been doing this for a long time, and causing disaster after disaster, catastrophe after catastrophe. Destruction, deaths, people losing their homes, their jobs.”

“I was in Santa Rosa and was in a neighborhood that was evacuated. We could hear the breakers popping everywhere. We evacuated and saw my former partner’s house burn down. I was evacuated for about a week, our power was turned off, and my case was best case scenario. It was terrible,” Jazmín explained, relaying her experience during the Tubbs Fire.

“My cousin lost her home. A lot of people lost their jobs because several hotels burned down, senior homes burned down, fast food restaurants, a K-Mart. People lost so much in the fires, family heirlooms and things that can’t be replaced.

“People who lost their jobs, including a lot of undocumented folks, had nowhere to turn. So our community had to start fundraising. We started Undocufund, which basically was a direct financial help for families that were undocumented that needed financial assistance. But this had to come from our community. PG&E gave no support to us whatsoever, they just went on their advertising campaign.

“Our entire community suffered major trauma, half the town burned down. So now, when the shutoffs happened, people were going crazy, people were panicking. They were going to get gas in lines around the block. It was very chaotic, very traumatic for the entire community. And the utility company doesn’t care. They’ll do whatever it takes to reduce their own liability, promoting it as a way to keep people safe, but really, it’s disrupting operations, it’s disrupting people’s jobs. Because those same people that didn’t have the money or resources to get help after the fires, they still don’t. So, when the power lines get cut, people that work in restaurants or at hotels will not be protected and won’t get paid for those days of missed work.

“The people that suffer the most are working class families that are living paycheck to paycheck. In Santa Rosa, the fires created a huge housing crisis. People that are renters were affected so much because rates increased dramatically as we lost 15 percent of our housing. It continues to have these massive effects, and with these shutoffs it’s just continuing.”

Commenting on the party that PG&E hosted at a Sonoma County winery on the day of the shutoff announcement and exactly two years after the Tubbs Fire, Jazmín stated, “It’s disgusting. I got messages from local PG&E employees in Sonoma County asking whether I’m okay after the blackouts. They do these campaigns to make themselves look good, meanwhile they’re over here fundraising at expensive parties at wineries. It’s absolutely disgusting and insulting. The sad part too is that people who are winery owners are part of the same network and group as the PG&E executives, and they support each other, and don’t care about anyone else’s well-being.”

She also denounced the California Public Utilities Commission (CPUC), the ostensible “regulatory” agency that oversees the utility monopolies in California. She noted, “the last time that PG&E got convicted for criminal behavior, federal officials actually criticized the close relationship between CPUC and PG&E. They don’t do their job and are a huge waste of resources, so the judge actually had to appoint someone else to oversee the company. They ended up not doing anything either.”

“These shutoffs are what they’re going to keep doing. It’s just our government facilitating business as usual for these companies. I think that our declining climate conditions and the increased frequency of extreme weather conditions, it’s bringing these issues to light more and causing greater consequences, when these utilities are mismanaged. They’ve been mismanaged for decades, and now it’s coming to light.”

When asked for her thoughts on the way forward, Jazmín immediately replied, “I think PG&E should be nationalized. I think that their efforts to make a profit are continuing to hurt people, massive amounts of people. They don’t have a functioning, fair or just business model, and I think the service is something that needs to be taken over.”

She elaborated, “It’s not profitable to keep people safe, and so long as that’s true people will keep suffering. It’s causing us untold harm. Once under public control, we need to start with the basics by maintaining the power lines that have decades and decades of backlogs on maintenance. We start with education, and making sure that operations are safe. We can’t cut corners on these things, and keep extracting from this kind of service. This shouldn’t be meant for profit.

“When we follow industry under capitalism, each industry completely extracts as much profit as possible until it crashes and dies. We’re at wit’s end with this. We cannot continue to extract profit from energy, especially utilities, and keep putting people at risk. We have to evolve as a country, as a world, in terms of how we provide for people’s needs.” 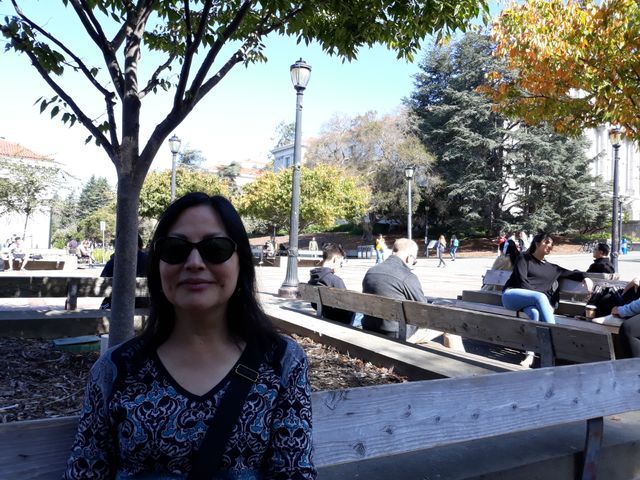 Misa, a resident of Berkeley, was also disturbed by the mass power shutoffs. She commented, “It doesn’t seem like a good plan going forward. It was not very well planned out at all, and a lot of people think PG&E was only worried about their own liability over what happens to the community.”

“I think what bothers me most is when you hear that there are executives getting bonuses instead of investing in their infrastructure. That doesn’t make any sense. It’s just like the banks after the 2008 financial crisis. It makes no sense, they already have their salaries which are pretty high. Use that money to reinvest in the business and infrastructure.” 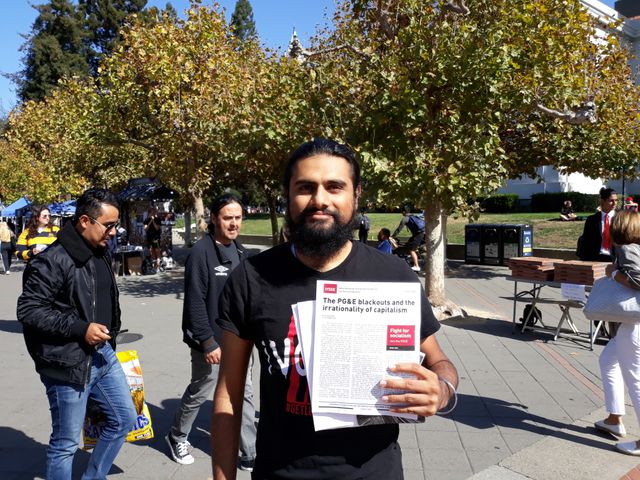 Harman, a South Asian Studies major, commented on the forced blackout, “It’s disgusting. The reason they decided to do this was because it’s cheaper to just pay the fines and not upgrade their infrastructure like they’re supposed to. That’s absolutely disgusting.”

“One person died within 15 minutes because his breathing machine was turned off, I heard that on the news. PG&E did that on purpose and no one’s going to jail for that. They literally killed people and they’re not going to go to jail for that, just because they can afford to pay the fines? They burned down the whole town of Paradise! It’s insane.”