Hill is the first ex-White House aide to testify in the impeachment inquiry launched last month by the Democratic-controlled House of Representatives. She resigned her post on the National Security Council (NSC) shortly after a meeting last July 10, which she described as a tense confrontation between Bolton and Ambassador to the European Union Gordon Sondland, who, along with acting White House Chief of Staff Mick Mulvaney and Giuliani, was heading up the White House Ukraine operation.

According to multiple press reports, Hill testified that after the July 10 meeting, Bolton instructed her to raise their joint concerns over the shadow Ukraine diplomacy with the chief lawyer for the NSC. She said Bolton told her to tell the White House lawyer, “I [Bolton] am not part of whatever drug deal Sondland and Mulvaney are cooking up.”

Hill also quoted Bolton as saying in a previous conversation, “Giuliani’s a hand grenade who’s going to blow everybody up.” 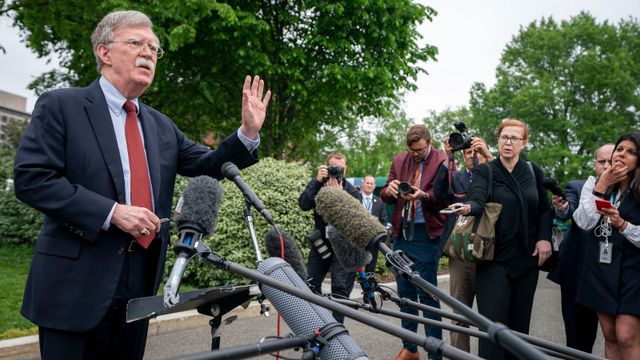 Bolton departed from the Trump administration under acrimonious circumstances (Trump said Bolton was fired, Bolton insisted he had resigned) on September 10. A ferocious war hawk who had called for military strikes against Iran and North Korea and pushed for US military intervention to overthrow the Maduro government in Venezuela, Bolton was known to have been at odds with Trump’s peace overtures in North Korea and Afghanistan and his decision to call off missile strikes against Iran earlier this year.

He also expressed the dismay within disaffected sections of the state with Trump’s personalist methods and disdain for established structures and procedures, as well as his erratic and unpredictable conduct of foreign policy.

Bolton’s angry response to Trump’s maneuvers with Ukraine were of a piece with his hard-line stance on foreign policy. He and others in the administration, including Hill and Marie Yovanovitch, whom Trump removed as ambassador to Kiev last May and who testified in the impeachment inquiry on Friday, considered Trump’s suspension of military aid to Ukraine and refusal to grant President Volodymyr Zelensky a White House meeting to be a political gift to Russia and part of Trump’s supposed softness toward Vladimir Putin.

Just five days before Bolton left the White House, the Washington Post published an editorial laying out the allegations that are at the center of the impeachment inquiry announced three weeks later by House Speaker Nancy Pelosi. The Post wrote:

"Not only has Mr. Trump refused to grant the Ukrainian leader a White House visit, but also he has suspended the delivery of $250 million in US military aid to a country still fighting Russian aggression in its eastern provinces. Some suspect Mr. Trump is once again catering to Mr. Putin… But we’re reliably told that the president has a second more venal agenda: He is attempting to force Mr. Zelensky to intervene in the 2020 US presidential election by launching an investigation of the leading Democratic candidate, Joe Biden."

The Trump administration, as explained in the Socialist Equality Party Political Committee statement “No to American fascism! Build a mass movement to force Trump out!,” is an urgent danger to the working class. His response to the impeachment inquiry has underscored his contempt for constitutional processes and rejection of any congressional restraints on his power.

His recent speeches in Minnesota and Louisiana were overt appeals to racism, anti-Semitism and political violence, and declarations of support for police repression and militarism. He is seeking to establish a dictatorial regime and has repeatedly indicated that he may refuse to leave office if defeated in the 2020 election, and might call off the election altogether and remain in power in defiance of the Constitution.

He has continued to defy Congress in the impeachment inquiry, ordering past and present administration officials to refuse to cooperate with the House investigation. On Tuesday, Giuliani announced that he would not comply with a congressional subpoena requiring him to turn over documents related to the Ukraine operation.

Trump continues to tweet statements denouncing his political opponents as traitors, and on Monday a gruesome meme was circulated on the internet depicting Trump shooting, stabbing and hacking to death political opponents and journalists in a bloody rampage. The video was shown last week at a conference of far-right supporters that featured appearances by Donald Trump Jr., former White House Press Secretary Sarah Huckabee Sanders and former Trump campaign manager Corey Lewandowski.

But Bolton’s role in the political warfare within the ruling class that has produced the impeachment inquiry underscores the fact that there is nothing democratic or progressive about the opposition to Trump by sections of the intelligence, military and national security establishment and corporate-financial oligarchy with which the Democratic Party is aligned.

The Democrats are conducting the impeachment inquiry in secret and focusing it entirely on the claim that Trump’s attempt to shake down the Ukrainian government for his personal political gain has damaged “national security,” i.e., the global strategic interests of US imperialism. They are doing everything they can to separate it from Trump’s real crimes against the social interests and democratic rights of the working class, with which they are in agreement. They want either to remove Trump or impose changes in his foreign policy by the methods of palace coup, without stirring up the broadly and deeply felt opposition to Trump among working people and youth.

The forces with which the Democrats are aligned include Bolton, who speaks for the most rabidly militaristic factions of the neo-conservative right wing.

The outrage within the ruling class over Trump’s withdrawal of US troops from northern Syria—denounced by both the Democrats and large sections of the Republican Party as a capitulation to Russia and Iran—has further inflamed the political warfare in Washington and fed into the impeachment crisis.

An editorial in the Tuesday print edition of the Wall Street Journal, the flagship Murdoch newspaper in the US, which has consistently defended Trump against the Democrats, carried the headline “Trump’s Syria Mess” and concluded with a warning to the White House:

"Mr. Trump won’t like to hear it, but the Syrian mess is hurting him at home too. Republicans who have stood by him through the Russia fight and more are questioning his judgment as Commander in Chief in an increasingly dangerous world. With impeachment looming, he can’t afford to alienate more friends."

As long as the political crisis is limited to the divisions within the ruling class, there can be no democratic outcome. The victory of either faction will pose immense dangers to the working class. The struggle to remove Trump must be conducted as a mass movement in defense of democratic rights and the social interests of working class and in opposition to both big business parties and the capitalist system they defend.