No to the sellout contract! Take the GM strike out of the hands of the UAW!

With the tentative agreement announced Wednesday by the United Auto Workers, the struggle by 48,000 autoworkers at General Motors enters a new stage. If their struggle is not to be defeated, workers must mobilize against the UAW, which is collaborating with the auto companies to impose a contract that will set a new benchmark for exploitation for generations to come.

The Wall Street investors who stand behind General Motors have made clear their attitude toward the deal. “We continue to believe that if this is ratified, it is a fairly solid outcome for GM,” analyst Joseph Spak said. “The financial implications of the deal don’t look too onerous.”

Reports that President Trump spoke to GM CEO Marry Barra and UAW President Gary Jones by phone on Wednesday demonstrate the extreme sensitivity of the entire ruling class to the outcome of this strike. A defeat of GM workers will not only set the standard for labor costs throughout the American economy, it will represent a major defeat for the entire working class. 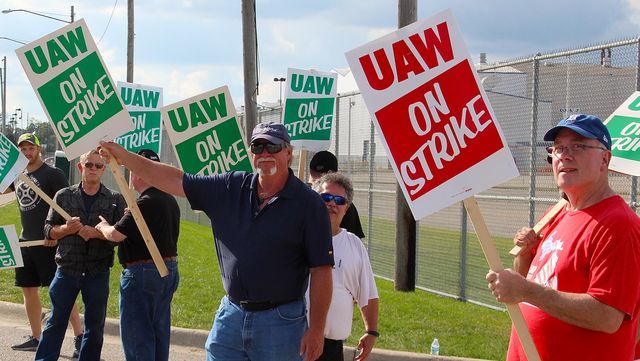 Only a week ago, the UAW claimed in a statement that GM had not negotiated in good faith since day one. And yet, after more than 32 days on strike, the UAW has presented workers with a contract that, in almost all respects, is identical to GM’s initial proposal from September.

In a press conference at GM’s Renaissance Center in downtown Detroit, an evasive UAW Communications Director Brian Rothenberg lied through his teeth. After declaring that the contract would “not only end perma-temps in the industry, but throughout the nation,” he deliberately concealed the fact that the UAW had sanctioned a vast expansion of low paid, at-will employees.

Rothenberg was forced to acknowledge that the much-publicized “promise” by GM to invest billions in the United States and “hire or retain” 9,000 workers is not contained in the contract and is so much hot air.

The response of workers to the contract is overwhelmingly negative. The opposition to the deal that autoworkers have expressed on social media is only one indication of a brewing rebellion against the UAW.

Fearing a revolt, the UAW decided to keep workers on the picket line during the voting process. But the union is forcing workers to vote on the contract in an accelerated process that will leave them no time to adequately study the details and discuss the agreement among themselves. The full contract was not even released to GM National Council members, apparently out of fear that it could leak out to the membership.

Until the full contract has been released, the worst parts of the agreement remain unknown. But the official “highlights” released yesterday by the UAW already reveal massive concessions:

* Three out of the four plants GM slated for closure last year will remain closed. This includes the historic Lordstown plant, which once employed 4,500 workers. There are estimates that as many as 25,000 related jobs could be destroyed in the Youngstown area, which is already plagued by deindustrialization, poverty and the opioid epidemic. The Detroit-Hamtramck plant will, at some unspecified time, be re-tooled to manufacture a new model electric pickup truck, with only a fraction of the number of workers originally employed at the plant.

* Workers will receive only two wage increases of three percent over the four-year contract, failing to keep pace with inflation and further lowering their base wage rate in real terms.

* More than 2,000 higher-paid “legacy” workers will be pushed out of the plants by next February, by means of buyouts from the “Special Attrition Program.”

* The deal grants a blank check to GM on the number of temps it hires in its plants, requiring only that any decision be “approved” by the UAW.

* Temps will be hired in at full-time positions after three “consecutive” years of employment. This wording implies that temporary workers who are laid off and re-hired will start from the beginning.

* Appendix K, the clause from the 2015 contract that enabled the secret “memorandums of understanding” that sanctioned the replacement of full-time workers with contractors at Lordstown and Lake Orion, has been “enhanced” to “[identify] opportunities to retain work and add new work to UAW-represented GM locations,” i.e., expand the use of contractors at less profitable facilities.

* The deal establishes a new joint labor-management “National Committee on Advanced Technology” to “discuss the impact of future technologies” on GM’s labor force.

* The UAW-GM Center for Human Resources, exposed as a nexus of bribery and graft by the federal corruption probe, will be kept in all but name. The current building will be closed and sold off. But the joint programs themselves will be retained and eventually housed in a new facility, paid for by GM.

The sincere but mistaken hope of many autoworkers that the combined pressure of impending federal corruption indictments and the militancy of the rank-and-file would force the UAW to fight has been demonstrated to be an illusion.

From the beginning, the UAW pursued a definite strategy of wearing down workers on the picket line in order to impose a defeat. That is why the UAW kept Ford and Fiat Chrysler workers on the job, enforced a total information blockade, and strung the GM workers out on $250 per week in strike pay.

The UAW also sought to isolate GM workers from their brothers and sisters internationally by promoting toxic “America-first” nationalism.

After a group of Mexican GM workers were fired for courageously refusing to accept increases in production during the strike in the US and appealed directly to American autoworkers for support, the UAW responded by demanding the reallocation of products from Mexican plants to the United States. This whipsawing of workers in different countries enables global corporations like GM to pit workers against each other in a race to the bottom.

The UAW is attempting to shut down the strike at precisely the point where it is beginning to intersect with broader sections of workers, posing the possibility for a joint struggle by the entire working class. The tentative agreement was announced the day before the beginning of the strike by some 30,000 Chicago public school teachers. Last weekend, copper miners in the Southwest and UAW Mack Truck workers on the East Coast joined GM workers on strike.

In all of these struggles, the unions are playing an identical role. The Chicago Teachers Union, which called a strike only after it was “unavoidable,” is openly seeking to limit it to as short a duration as possible. Its sellout of the last strike in 2012 paved the way for the closure of dozens of schools by then-mayor Rahm Emanuel, Obama’s former White House chief of staff.

By their own behavior, the trade unions have demonstrated that they cannot be reformed. They have exposed their own essence as bribed tools of corporate management, organically hostile to the interests of the workers they claim to represent.

GM workers must now draw the appropriate lessons and take the initiative out of the hands of the UAW.

A “no” vote is necessary. But that by itself is insufficient. The UAW will respond to a contract rejection by redoubling its campaign of lies and intimidation, as it did after the rejection of the Chrysler contract in 2015.

The urgent task for autoworkers is to form rank-and-file factory committees to take control of the struggle. These committees should make the following demands:

* No vote without time to study the contract! Workers must demand access to the full contract, not just the bogus “highlights,” and be given at least a full week to study it before voting. Workers should hold broad, democratic discussions on the contract, outside of the view and control of the union.

* For rank-and-file oversight of the balloting process! Autoworkers should insist that their rank-and-file committees have the authority to oversee voting, to ensure that there is no ballot-stuffing or vote-rigging, as is widely believed to have occurred during the ratification of the Ford contract in 2015.

* Expand the strike to Ford and Fiat Chrysler! Unite with the working class of different countries! Rank-and-file committees should be based on the principle of internationalism--that workers everywhere have the same basic interests.

* Committees should formulate their own demands for the strike, including a 40 percent pay raise, the restoration of COLA for current and retired workers, the abolition of the multi-tier wage and benefit system, the immediate conversion of all temps into full-time workers with full wages and benefits, the reopening of all closed plants and the re-hiring of laid-off workers.

* Autoworkers must defend the courageous GM workers in Silao, Mexico and demand the rehiring of those fired for supporting the US strike.

The attacks by General Motors in the US are part of a global strategy of the ruling class. The auto companies are preparing and already implementing a jobs bloodbath, which is part of the efforts of the ruling elites to organize a further redistribution of wealth from the working class to the rich.