Service Employees International Union Local 73, the bargaining unit for 7,500 striking Chicago school support workers, announced a tentative agreement with Chicago Public Schools (CPS) Sunday night. No details of the contract have been released as of this writing, but there can be no doubt that it fails to meet the demands of classroom and special education aids and custodians for significantly increased staffing and a meaningful pay increase.

Many of these workers receive less than $35,000 a year in pay and are forced to work additional jobs to feed, clothe and house their families.

CPS Chief Executive Officer Janice Jackson told a press conference that “the support staff represented by the SEIU will be back in school.” However, SEIU Local 73 President Dian Palmer, in a Facebook post, said, “We will be on picket lines in solidarity with CTU (Chicago Teachers Union) tomorrow.” 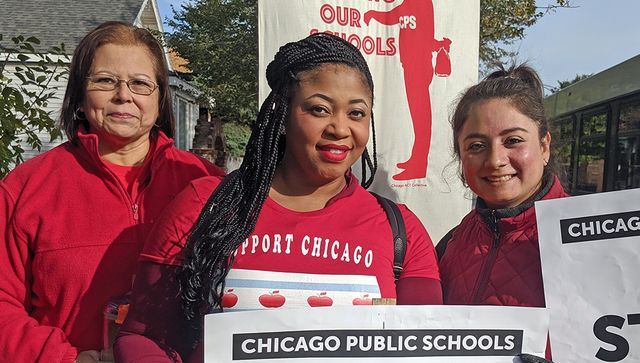 Whether or not the SEIU directly scabs on the teachers and orders its members to cross their picket lines, its signing of a deal while the CTU is still in talks is a breaking of ranks designed to further isolate the teachers from the broad support they enjoy among workers and youth in the city and nationally.

Local 73 workers should reject any order to return to work and prepare to vote down the contract.

The SEIU announcement comes as the CTU works ever more feverishly to wind up the walkout by its 25,000 members, who are today entering their eighth school day on strike. Any contract deal announced by the CTU will be on terms dictated by Democratic Mayor Lori Lightfoot, who has declared that there is “no money” to address the teachers’ urgent demands for smaller class sizes and more support staff.

CPS chief executive Jackson published a column last week in the Chicago Sun Times in which she wrote that the disastrous conditions in the Chicago schools would not be fixed by the new contract and would linger for “years.”

That the CTU is preparing a sellout was made clear by Vice President Stacy Davis Gates, who told the press Sunday night, “We are truly asking for the basic minimum.”

Tens of thousands of teachers, support staff, other workers and students have marched and rallied in support of the school strikers. The Chicago strike takes place, moreover, in the context of the just-ended General Motors strike and massive stoppages and protests by workers all around the world. It comes in the aftermath of a wave of teachers’ strikes in the US over the past two years.

Rather than fighting to actively mobilize the working class and broaden the teachers’ struggle, the CTU, led by President Jesse Sharkey, has deliberately isolated the strike and repeatedly declared its desire to bring it to an end. Sharkey is following the playbook of the CTU’s parent union, the American Federation of Teachers (AFT), in selling out previous teachers’ strikes by seeking to starve out and wear down the teachers while channeling their struggle behind the Democratic Party and its electoral activities.

This is in a city long controlled by the Democratic Party machine that produced anti-public school figures such as Barack Obama and his education secretary, Arne Duncan, as well as former Mayor Rahm Emanuel, who conspired with the CTU to end the 2012 teachers’ strike and then close nearly 50 schools.

Sharkey and AFT President Randi Weingarten paraded Democratic presidential candidate Elizabeth Warren on the picket line last Tuesday, and Sharkey appeared in an advertisement for presidential candidate Joe Biden on Friday. Sharkey, a supporter of the Democratic Socialists of America, demonstrated his loyalty to US capitalism and imperialism in a phone call with Biden, which concluded with Sharkey telling the right-wing warmonger, “I really appreciate your call.”

At a CTU rally on Saturday, Sharkey addressed a small crowd of union bureaucrats and activists and said, “I’ll be happy if we can end this strike soon.” When a WSWS reporter asked him at a press conference if teachers will face any cuts or concessions, Sharkey declined to answer and rushed off, ending the news conference.

Over the weekend, a federal mediator’s report was leaked to a media outlet, which caused the city to claim there was a “breach in trust” in the negotiations. The report claimed that $71 million was in dispute.

The money in contention is entirely inadequate to address the problems in a school system that has been starved of funds for decades, while the Democrats have encouraged the spread of privately owned charter schools. The 2020 budget proposal released last week by Mayor Lightfoot includes $703 million to repay principal and interest to the city’s Wall Street bondholders.

Chicago is a city with more than a dozen billionaires. Hedge fund manager Ken Griffin alone has a net worth of over $11.2 billion to his name. The Pritzker family, including the billionaire governor of Illinois J.B. Pritzker ($3.5 billion), have a fortune of more than $13 billion. The collective wealth of Illinois’ billionaires is more than $53 billion.

It is critical for teachers to understand that they are in a struggle not just against CPS or even just the city and state governments. They are in a struggle, as part of the working class around the world, against capitalism. It is not simply a trade union struggle that can be resolved on the basis of a negotiated contract, but requires a conscious fight to unite the working class on the basis of a socialist program.

In order to fight for their needs, not what the city claims it can afford, teachers should organize rank-and-file strike committees to take the conduct of the strike out of the hands of the CTU. These committees will fight to broaden the struggle into a city-wide general strike in defense of public education and the social needs of all working people.