The Democratic-controlled House of Representatives will hold a floor vote as early as Thursday on a resolution authorizing the ongoing impeachment inquiry launched last month into President Donald Trump.

On Tuesday, the Democratic leadership released the text of the resolution, which affirms the existing inquiry, sets the course for public hearings beginning next month, designates the House Intelligence Committee as the body that will hold those hearings, and gives the Republicans the right to subpoena witnesses and documents in defense of Trump.

In a letter to House Democrats Monday night, House Speaker Nancy Pelosi tacitly acknowledged that she was taking the step of holding a vote by the entire House in response to claims by the White House and congressional Republicans that her previous refusal to do so rendered the impeachment inquiry illegitimate. The lack of such a vote, which a federal court ruled on Friday was not required to launch the impeachment process, was cited in an October 8 letter from the White House counsel announcing the administration’s refusal to cooperate with the inquiry. 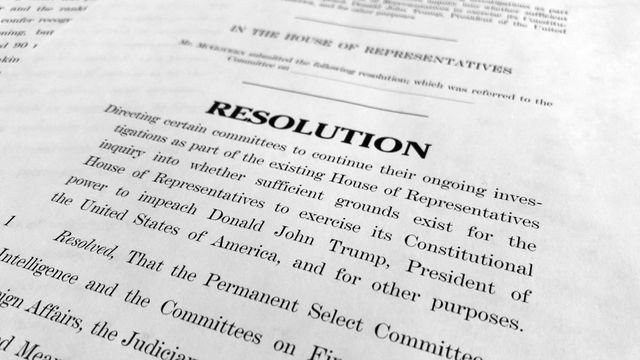 The text of a House resolution released by the Democrats that authorizes the next phase of the impeachment inquiry against President Donald Trump is photographed in Washington, Tuesday, Oct. 29, 2019. (AP Photo/Jon Elswick)

“We are taking this step to eliminate any doubt as to whether the Trump administration may withhold documents, prevent testimony, disregard authorized subpoenas, or continue obstructing the House of Representatives,” Pelosi wrote in her letter.

However, the White House and leading Republicans made clear that passage of the resolution would not alter their official posture of non-cooperation. White House press secretary Stephanie Grisham issued a statement dismissing the Democrats’ resolution and calling the impeachment inquiry “completely and irreversibly illegitimate.”

In response to the mounting impeachment drive, Trump has doubled down on his moves toward a presidential dictatorship and his efforts to rally far-right and fascistic forces on the basis of anti-immigrant racism, extreme nationalism and attacks on “radical leftists” and socialists. On Monday, he gave a fascistic speech to a convention of police chiefs in Chicago in which he denounced any criticism of police violence. “We face an onslaught from far-left activists who want to erase America’s borders and nullify our federal laws,” he declared to cheers from the assembled police officials.

The Democrats have excluded these real attacks on democratic rights from their impeachment inquiry and instead focused entirely on Trump’s withholding of support and military assistance to the right-wing, anti-Russian government in Ukraine. The political character of this government was underscored by the October 14 appearance of the prime minister on the stage of a neo-Nazi rock concert held to commemorate "Defender of Ukraine Day."

Trump held up the $391 million aid package in order to pressure Kiev to publicly announce a corruption probe of Democratic presidential candidate Joe Biden and his son, who held a lucrative position on the board of a Ukrainian gas company. This is being cited by the Democrats as another example of Trump’s supposed “softness” toward Russia and his undermining of US “national security.”

The political character of the disaffected forces within the military, the intelligence agencies and the foreign policy establishment with which the Democrats are aligned is reflected in the Trump administration officials who have defied White House orders and agreed to testify in the impeachment inquiry. They include former and active State Department and White House National Security Council officials who oppose Trump for failing to fully back the Ukrainian regime in its ongoing confrontation with Moscow.

On Tuesday, Lieutenant Colonel Alexander S. Vindman, a National Security Council (NSC) director specializing in US policy in Russia and Ukraine, testified before the House impeachment inquiry. Vindman, like his former superior at the NSC, the long-time Russia hand Fiona Hill, who testified last week, was brought into the White House by the arch war-hawk, anti-communist and neo-con John Bolton.

Bolton left the Trump administration on September 10 after clashing with Trump on a number of issues, including Trump’s peace overtures toward North Korea and the Taliban, his last-minute decision to call off missile strikes against Iran, his reluctance to intervene militarily in Venezuela and his withholding of military aid from Ukraine. Bolton and aides such as Hill and Vindman are being extolled by the Democrats and media outlets such as the New York Times, the Washington Post, CNN and NBC as heroes in the factional fight against Trump.

In his prepared remarks to the closed-door hearing of the House committees conducting the impeachment inquiry, released in advance by the New York Times, Vindman, 44, explained that his family fled Ukraine in the 1970s and that he dedicated his adult life to combating Russian influence around the world. Describing himself as an American “patriot,” he reviewed his 20 years in the Army, including combat in Iraq, followed by his tenure as a foreign policy officer specializing in Eurasia, in which capacity he served in the US embassies in Kiev and Moscow.

After serving as an expert on Russia for the chairman of the Joint Chiefs of Staff, he joined the NSC in 2018, several months after Trump appointed Bolton to head the body. Vindman is the first White House aide to testify who was on the July 25, 2019 phone call between Trump and Ukrainian President Volodymyr Zelensky that is at the center of the impeachment inquiry.

Before describing his response to Trump’s attempts to bully Ukraine into publicly investigating the Bidens as well as alleged Ukrainian interference in the 2016 election on the side of Hillary Clinton, he told the inquiry that “… a strong and independent Ukraine is critical to US national security interests, because Ukraine is a frontline state and a bulwark against Russian aggression.” He added that Trump’s “alternative narrative undermined US government efforts to expand cooperation with Ukraine.”

Vindman said Bolton cut the meeting short and walked out, after which he (Vindman) and Hill told Sondland his statements were “inappropriate.” The two then reported their concerns to the NSC’s lead counsel.

He went on to describe the July 25 phone call as a “partisan play which would undoubtedly result in Ukraine losing the bipartisan support it has thus far maintained.” He continued, “This would undermine national security.” He wrote that he once again reported his concerns to the NSC lead counsel.

The Democrats have been emboldened to escalate their impeachment drive by the furious reaction among disaffected sections of the military, intelligence and foreign policy establishment to Trump’s recent withdrawal of US special forces troops from parts of northern Syria, in advance of Turkey’s invasion, which targeted Kurdish militia that had served as the main US proxy forces in the so-called war against ISIS. A series of retired generals have publicly denounced Trump for effectively ceding control of the region bordering Turkey to Russian, Turkish and Syrian government forces.

This has underscored the right-wing basis on which the Democrats are conducting their impeachment inquiry. They are denouncing Trump for his talk of ending “forever wars” in the Middle East, speaking for factions within the ruling class and the state that are the most hawkish in the pursuit of US hegemony in the oil-rich region and are staunchly opposed to any pullback in the confrontation, including militarily, with Russia.

No to American fascism! Build a mass movement to force Trump out!
[14 October 2019]