Hundreds of Hamburg students have protested against the return of Bernd Lucke, founder of the far-right Alternative for Germany (AfD), to their university in the past two weeks. Despite this, the SPD-Green Party Hamburg Senate (state executive) enforced the holding of a lecture on Wednesday by the extreme right-wing professor, using police violence against the student resistance. 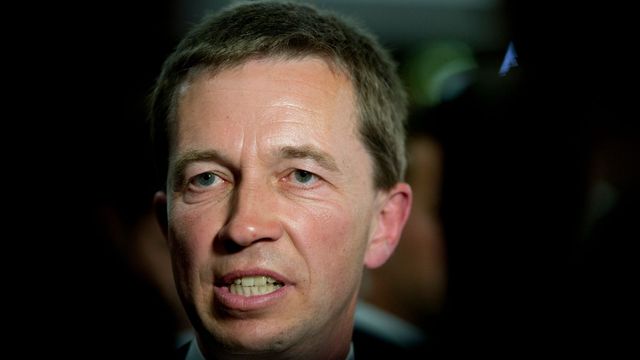 Dozens of policemen armed with helmets, batons and pistols erected barriers and shielded Lucke from the protesting students. Anyone who wanted to attend the lecture had to show their ID to a private security service.

The events in Hamburg highlight dangerous developments in Germany. Using police violence, fascistic doctrines are being enforced against the resistance of students who refuse to accept being indoctrinated by right-wing extremist professors.

A protest appeal by Hamburg’s Asta (student union), which represents more than 40,000 students at the University of Hamburg, had declared it “unreasonable” that “the person who bears joint responsibility for today’s social upheaval can simply return to their scientific pursuits.”

The police operation against the students had been preceded by an aggressive campaign in politics and the media, reaching to the top of the state. On October 16, when the professor wanted to give his first lecture, hundreds of students demonstrated in front of the main building. Some unfurled a banner with the inscription, “No place for spiritual arsonists” in the lecture hall and whistled “Lucke out,” preventing his lecture from taking place.

The representatives of the ruling elites were furious. Hamburg’s Science Senator (state minister) Katharina Fegebank of the Greens described the protest as “injustice in its purest form” and demanded the students make the “attempt at consensus,” i.e., come to an agreement with Lucke. She was supported by the Greens party leader, Robert Habeck.

The Bundestag (federal parliament) held a debate on the topic, in the course of which one party after another denounced the opponents of the extreme right-wing professor. Wolfgang Kubicki (Free Democratic Party, FDP) accused them of disregarding Lucke’s human dignity and of breaking the law. Elisabeth Winkelmeier-Becker (Christian Democratic Union, CDU) described the disruption of lectures as “terrorism of opinion.” Federal Education Minister Anja Karliczek (CDU) warned that political discourse should not be constricted. Left Party deputy Friedrich Straetmann spoke of “justified criticism of the students’ actions” and welcomed the fact that Lucke’s seminar could take place the next day.

Federal President Frank-Walter Steinmeier (Social Democratic Party, SPD) also considered it his presidential duty to condemn the students’ protest against a supposedly “uncomfortable politician” as “unacceptable.” He called on them to have an “open ear” for the right-wing extremist ideologue instead of “aggressively preventing talks.” Wolfgang Schäuble (CDU), president of the German Bundestag, took the same stance. “Freedom of speech” was being “restricted with reference to political correctness when a self-appointed democratic mainstream decides what may and may not be discussed,” he grumbled in the Bild newspaper.

This is the well-known propaganda of right-wing extremists coming from the mouths of the country’s leading politicians. In fact, they are the ones who attack freedom of expression, “constrict discourse” and “terrorize opinion”—against the students. While the ruling class is rearming the military, 80 years after the beginning of World War II, participating in wars that violate international law, carrying out mass deportations of refugees, protecting right-wing extremist networks in the state apparatus and building up a right-wing extremist party with the AfD, everyone who opposes this development is to be intimidated and silenced.

In an Orwellian manner, freedom of opinion, which represents a protective right against the state, is turned into its opposite and reinterpreted as the right of civil servants to “exercise their official duties,” as the presidium of the University of Hamburg formulated it with regard to Lucke. In the right-wing authoritarian traditions of the German ruling class, state-imposed right-wing extremism is defended as “freedom of opinion,” while critical students who defend themselves against it are suppressed using police violence.

The AfD, which sets the tone in the campaign against the students, clearly expresses what it is all about. “It is not enough to condemn the left-wing extremists,” writes Alice Weidel, leader of the AfD’s parliamentary group, in her press statement in defence of Lucke. One must also “talk openly about who has encouraged and pampered them all these years and thus made them a threat to liberal democracy.” “Left-wing extremist structures” were “fed with taxpayers’ money and politically shielded, under the pretext of the ‘fight against the right.’” One of those “cracking the whip and setting the line” was Berlin political scientist Hajo Funke, a leading expert on right-wing extremism and anti-Semitism in Germany.

The campaign against the Hamburg students must be called what it is: a coordinated action to pave the way for the AfD and its neo-Nazi ideology, to transform the universities, as before World War I and World War II, into training grounds for right-wing extremist and militaristic ideology, and to criminalise and suppress any opposition to it.

The “opinions” that are to be forced upon students again are well known. Lucke is the founder of a party whose current chairman, Alexander Gauland, glorifies Hitler’s Wehrmacht (army) and calls Hitler and the Nazis just so much “bird shit in over 1,000 years of successful German history.” The Thuringian AfD state chairman, Björn Höcke, with whom Lucke celebrated a joint election party five years ago, is an open fascist who calls for a “180 degree turn in commemorative politics,” including the demolition of Berlin’s Holocaust memorial, and demands the violent deportation of “culturally foreign” people from Germany in a “large-scale re-migration project.”

Another prominent right-wing extremist professor who is aggressively defended by all parties and the media against massive student protest is the Berlin “historian” Jörg Baberowski. After the death of his role model Ernst Nolte, Baberowski is probably the best-known Nazi apologist among German historians. “Hitler was not a psychopath, he was not vicious. He didn’t want people at his table to talk about the extermination of the Jews,” he said in 2014 in Der Spiegel. He rants against refugees and his “academic” work is characterized by the trivialization of National Socialism (Nazism) and the crimes of the Third Reich. The federal government also defended Baberowski in the name of “freedom of opinion.”

The campaign goes far beyond the universities. In the current report by the Office for the Protection of the Constitution, as the secret service is called, commissioned by the grand coalition of the CDU/CSU and SPD, the Sozialistische Gleichheitspartei (Socialist Equality Party, SGP) is, for the second year in a row, listed as an “object of surveillance” because it advocates a socialist programme which, according to the secret service, is directed “against the existing state and social order invariably slandered as ‘capitalism’, against the EU, supposed nationalism, imperialism, and militarism.” Even mass events such as the “Rock gegen Rechts” (Rock against the Right) concert last September in Chemnitz are now being defamed by the intelligence agencies as “left-wing extremist.”

The Interior Ministry has responded to the SGP’s legal complaint against its inclusion in the secret service report with a 56-page statement explicitly based on totalitarian legal views introduced by the Nazis in the Third Reich. It revives the doctrine of Willensstrafrecht (punishment of the criminal will), which criminalizes ideas that could promote opposition to the capitalist state and the existing social order. In this way, all left-wing thinking is to be made illegal. At the beginning of the document, the federal government claims that “fighting for a democratic, egalitarian, socialist society” is at odds “with the central values of the constitution.”

The book “Why Are They Back?” traces and analyses this development in detail. It shows that the shift to the right at universities and the rise of the AfD are inextricably linked to growing social inequality and the return of Germany to militarism. To suppress the enormous opposition of the working class and youth, the ruling class is returning to its authoritarian and fascist traditions.

“The AfD has neither mass support nor powerful units like the SA (Sturm Abteilung) that once recruited from uprooted World War One soldiers, ruined petty bourgeois and the desperate unemployed,” we wrote in the foreword. “The strength of the AfD stems exclusively from the support it receives from the establishment political parties, the media, the government and the state apparatus.”

This assessment is confirmed by the events in Hamburg. In the struggle against this, the historical lessons and necessary conclusions must be drawn: As in the 1930s, the struggle against fascism today is also a struggle against capitalism and all bourgeois parties. It must be conducted independently of and against them and requires the independent mobilization of the working class on the basis of a socialist programme. This is what the SGP, the German section of the Fourth International, and its youth organization, the International Youth and Students for Social Equality, are fighting for.