Protests by farmers and peasants have continued to escalate in the days following an announcement by the Mining Council, a division of Peru’s Ministry of Energy and Mines (Minem), of its approval of a construction license for the controversial Tía María mining project.

Following the council’s decision, the mine’s owners, Grupo Mexicano, through its subsidiary Southern Peru, a US company, announced that it would postpone construction due to the violent rejection of the project in the Tambo Valley, where the open pit Tia Maria mine is located. It is a heavily populated agricultural region near the city of Arequipa in the southern Peruvian Andes. The transnational Grupo Mexicano has a long presence in Peru, operating two large copper mines in the south of the country—Cuajone and Toquepala.

Enraged by the Council’s decision, hundreds of protesters blocked the main roads in the region. Thirty kilometers of road linking the districts of Cocachacra, Deán Valdivia and Punta de Bombón were impassable. The population of the province of Islay woke up to the presence of pickets in the area. 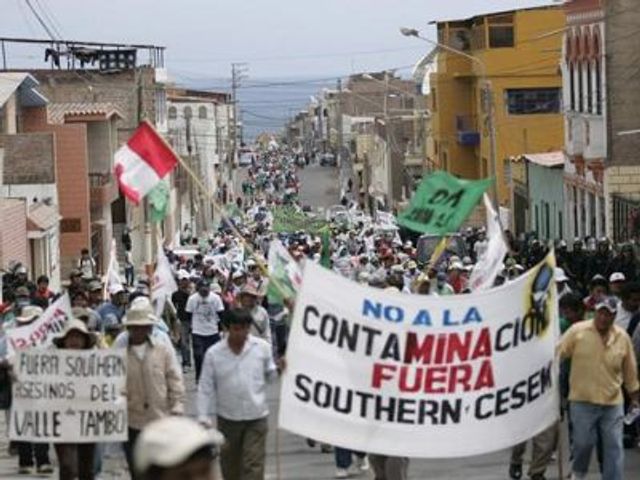 Protesters did not wait for the Mining Council’s ruling to express their dissatisfaction. Since last Monday, according to El Comercio, the director of the province’s school district, Juan Luque, said that “school work is carried out normally, but in the Tambo Valley few students have attended their educational centers.” Several had been affected by tear gas fired by the police, he said.

In addition, shops remained partially paralyzed and farms are without workers. A farmer who joined the roadblocks at dawn told El Comercio: “That mining project is not going to enter the Tambo Valley, which the president [of the Republic] understands. For 10 years we have been fighting and my children are no longer afraid of the police.”

Arguing against approval of Tia Maria, the Tambo Valley farmers-peasants said that the authorization of the mine’s construction had ignored the findings of a previous report that it poses a direct threat to the fragile ecosystem in the region, particularly the so-called “Lomas de Cachendo”, which the Ministry of Agriculture (Minagri) designated as protected land. It is an ecosystem located in the Tambo Valley where extractive activities cannot be carried out because the land belongs to the Regional Government of Arequipa, which prohibits private economic activities. This ecosystem has an area of 8,092 hectares, at least a tenth of which would be destroyed by the mining project.

Following the Mining Council’s decision, Arequipa Governor Elmer Caceres Llica reiterated his opposition to the project. And a spokesperson of the farmers and peasants of Tambo Valley, Miguel Meza, said that they had decided to intensify their protests. Meza announced that strikes will continue beginning Monday, until the government of President Martín Vizcarra reverses the Mining Council’s decision. He accused the government of “not honoring their word”, and Vizcarra of “mocking the Tambo Valley.”

Meanwhile, the head of Arequipa’s Regional Environmental Authority (ARMA), Carlos Santos Roque, charged that Southern Peru was already carrying out construction activity in the Lomas de Cachendo area in violation of its promise not to begin until an agreement had been reached. The biologist told Radio Yaravi that satellite photos had shown signs of roads and penetration of the sensitive area. His agency, he said, would be using drones and other technological resources to corroborate these violations. The local authority was barred by the Vizcarra government from participating in the environmental impact study on the Tía María project.

Only three months ago, Vizcarra met with the governor of Arequipa and declared his opposition to Tia Maria. On August 8, Vizcarra was audiotaped speaking against the project.

“On August 9, the National Mining Council suspended for 120 days the license of the Southern Peru Copper Corporation, which was in charge of the construction of the Tía María copper project,” reported El Correo. It then cited Vizcarra’s taped statements in which he claimed agreement with the Arequipa governor, while emphasizing that a “technical” means should be found to get out of the mine deal.

This is the same language used by the businessmen represented by the National Society of Mining, Petroleum and Energy, which issued a brief statement claiming that the Mining Council issued its ruling based on “technical” and “legal” criteria, after evaluating the documents presented against the construction license. No explanation was provided as to what “technical” and “legal” criteria were used.

Tia Maria is the latest in a long series of conflicts between the transnationals and the comuneros – peasants and small farmers. The usual tactic in these struggles has been the blocking of roads and winning the support of the dozens of peasant communities who oppose mining extraction because the roads carrying supplies into and minerals out of the mines pollute rivers and their land, affecting their produce and livestock, and even causing deaths. The Tambo Valley inhabitants’ fears are based on the fact that their agriculture is heavily dependent upon the clean waters of the Tambo River basin.

In early September, miners decided to take their complaints to the capital, Lima. At the time, according to news radio RPP: Workers from dozens of mines (including from Tia Maria) who had been “on an indefinite strike since last week for salary improvements clashed last week with the police in front of the Ministry of Labor main building, which some protesters managed to enter by force. After the riots, 17 miners were arrested and taken to the Jesús Maria district police station.” Back in 2015, three Tia Maria miners and a policeman died in a protest.

Why, after 10 years of feasibility studies by Grupo Mexicano, along with reports on the ecological damage the mine would cause, and the ongoing demonstrations against it, have Vizcarra and his Mining Council now made the decision to approve it, reversing the position taken by the president less than three months ago?

The fundamental reason for the president’s ditching his “populist” attempt to posture as a friend of the comuneros is the deepening crisis of the economy of Peru and the region.

Mineral export revenues—the principal engine of Peru’s national economy—have dropped significantly, in large part as a result of the China-US trade war. Secondly, economic stagnation and a brutal increase in social inequality have created political instability . With the mass uprisings of the Chilean and Ecuadorean masses—on Peru’s southern and northern borders—there are growing expressions of fear within the bourgeois media of “contagion” leading to similar upheavals in Peru itself.

As result of these interrelated economic and social processes, foreign investors are pulling out of Peru. And, for the same reason, according to the business newspaper Gestionˆ, Peruvian multimillionaires are massively taking their money out of the country and investing it in overseas financial funds.

President Vizcarra’s shift on Tia Maria is bound up with the government’s attempt to stem this tide of capital flight and win back the favor of the transnational corporations and banks. The deputy minister of Mines recently said that the government is “focused on winning [by] 2021 mining projects [worth] up to US$ 21 billion in investments.” Thus, Vizcarra’s job is cut out for him: provide more profitable conditions for the transnationals while suppressing social opposition.

Such a policy will inevitably lead to a resurgence of class struggle under conditions in which the entire political establishment in Peru has been discredited by a massive corruption scandal.

This hatred for the government found expression on September 30, when President Vizcarra dissolved the Legislature—winning a slight gain in popularity. But the anger is directed at the corrupt executive and judicial branches of the government as well. The most popular slogan in demonstrations by students, public employees, teachers and health care workers has been “¡Que se vayan todos!”—Down with all of them!

As a result of an all-encompassing corruption scandal centered on bribes and kickbacks on contracts with the Brazilian mega construction company Odebrecht, the last five presidents are in jail, under house arrest or in exile. One of them, the Aprista Alan Garcia Perez, committed suicide minutes before he was to be arrested. Also, the last two Lima mayors are implicated in taking money from the company.