On Monday, the House Intelligence Committee released the transcripts of testimony given behind closed doors last month by two top State Department officials, the former ambassador to Ukraine, Marie Yovanovitch, and the former State Department counselor, Michael McKinley, who had resigned just before testifying.

The more than 450 pages of testimony shed little new light on the allegations against Trump leveled by the House Democrats, but they demonstrate the alignment of the Democrats with a powerful faction within the foreign policy establishment.

These officials were hostile to the policies of the Trump administration, particularly towards Russia. They were also affronted by Trump’s habit of disregarding official channels in his overseas operations, using such emissaries as his personal lawyer Rudy Giuliani, the former mayor of New York City.

A career US diplomat, Yovanovitch grew up speaking Russian at home as the child of immigrants from Siberia and Germany. She specialized in the countries of the former Soviet Union.

She was US ambassador to Kyrgyzstan under the Bush administration, and US ambassador to Armenia under both Bush and Obama. She was named ambassador to Ukraine by Obama in May 2016 and remained in Kiev until she was recalled by the State Department, at Trump’s orders, in April 2019.

Her testimony gave full vent to her concern over “strategic adversaries like Russia,” and she was unequivocal about the role of the State Department, telling the Intelligence Committee, “We need to rebuild diplomacy as the first resort to advance America’s interest, and the front line of America’s defense.”

A photograph published in 2017 in her hometown newspaper in Kent, Connecticut shows Yovanovitch and Petro Poroshenko, then Ukraine’s president, arm-in-arm with a visiting delegation of three US senators—Amy Klobuchar, John McCain and Lindsey Graham, all notorious anti-Russia war hawks—and surrounded by Ukrainian troops in camouflage uniforms.

Yovanovitch also told the committee of her close ties to Ukrainian Interior Minister Arsen Avakov, whom the World Socialist Web Site has previously described as “notorious for his long-standing ties to the fascist Azov Battalion and its leader Andriy Biletsky, along with its National Corps and National Militia groups.” 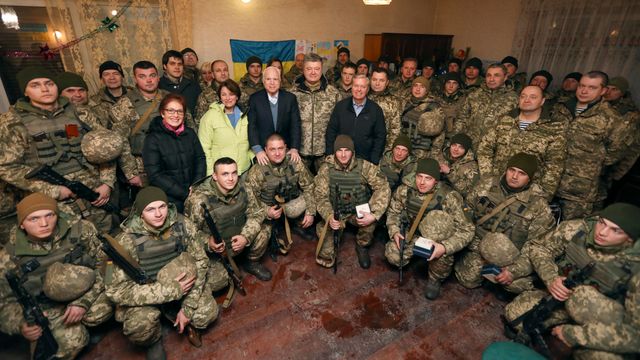 Ukrainian President Petro Poroshenko centre, Chairman of Senate Armed Services Committee, US Senator John McCain, centre left, US Senator Lindsey Graham, centre right, and US Senator Amy Klobuchar pose for photo with the Ukrainian marines, during their working trip to the Donetsk region to congratulate Ukrainian servicemen on the upcoming New Year, in the village Shyrokine, eastern Ukraine, Saturday, Dec. 31, 2016. Poroshenko and the delegation of US Senators visited the frontline positions of Ukraine's Navy, which holds the defense line in Shyrokine. (Mikhail Palinchak/Presidential Press Service, Pool Photo via AP)

It was Avakov who gave Yovanovitch a heads-up about the whispering campaign launched against her by two business associates of Giuliani, Lev Parnas and Igor Fruman, who apparently saw her as an obstacle to their business ventures. Both men, now American citizens, were arrested last month as they attempted to leave the US with one-way tickets. They were charged with making illegal campaign contributions to Trump and other Republican candidates in 2016.

McKinley is likewise a career State Department official. He was the senior career diplomat at the time he was appointed by Secretary of State Pompeo to serve as his counselor and liaison to the career Foreign Service staff. He had three decades of overseas postings, which included Latin America, Africa, Europe and three years as US ambassador to Afghanistan.

Both State Department officials denied any knowledge of either Hunter Biden, the son of former Vice President Joe Biden, or Hunter Biden’s lucrative position on the board of Burisma, a large Ukrainian natural gas company. They said their connections with Joe Biden were limited to his time as vice president, when he had the main responsibility for Ukraine policy under the Obama administration.

Among the few new details was Yovanovitch telling the committee that she was advised by another official, Gordon Sondland, a millionaire contributor to the Trump campaign who was named US ambassador to the European Union, that she should declare her enthusiastic support for Trump in order to avoid being fired after a campaign was launched against her by right-wing media sites and the president’s eldest son, Donald Trump Jr.

She said Sondland told her, “You need to, you know, tweet out there that you support the president and that all these are lies and everything else.” She continued, “It was advice that I did not see how I could implement in my role as an ambassador and as a foreign service officer.”

McKinley recounted his own efforts to counteract the campaign against Yovanovitch by seeking a public statement from the State Department in her defense, only to find that Secretary of State Mike Pompeo, on three occasions, would not respond to the suggestion. On the third occasion, McKinley resigned in protest.

The Intelligence Committee is expected to release two more transcripts Tuesday, detailing the testimony of Sondland and Kurt Volker, the former US special envoy to Ukraine, with the remaining transcripts of other witnesses promised by the end of the week.

Committee chair Adam Schiff said that four more “firsthand witnesses” to White House actions relating to Ukraine had refused to testify on Monday. These included John Eisenberg, the counsel for the National Security Council, his deputy Michael Ellis, Brian McCormack, an official at the Office of Management and Budget (and former chief of staff to Secretary of Energy Rick Perry), and Robert Blair, senior adviser to acting White House Chief of Staff Mick Mulvaney, all following instructions by the White House not to make an appearance before the committee.

Their nonappearance could be considered evidence of Trump’s guilt on charges of abuse of power and obstruction of justice, Schiff said. “We may infer that their testimony would be further incriminating for the president,” he claimed.

The White House has pushed back against subpoenas against any current high-level staff members, releasing to the media Monday a letter from the Office of Legal Counsel, the Justice Department unit that issues legal guidance to the executive branch—or, to put it more bluntly, supplies the president with the legal pretext for doing whatever he wants.

The letter from Assistant Attorney General Steven Engel to White House counsel Pat Cipollone, dated Sunday, November 3, says that Eisenberg was under no obligation to comply with the subpoena from the House Intelligence Committee because he was a regular participant in face-to-face meetings with President Trump, who frequently sought his advice. “You have asked whether the Committee may compel Mr. Eisenberg to testify,” Engel wrote “We conclude that he is absolutely immune from compelled congressional testimony in his capacity as a senior adviser to the President.”

It remains unclear whether the remaining “star” witness for the impeachment inquiry, former National Security Advisor John Bolton, will give testimony Thursday. He was given that date by the Democrats, and but has not been served a subpoena.

Meanwhile, the subterranean warfare over the identity of the CIA “whistleblower” whose official complaint became the pretext for launching the impeachment inquiry has continued. Right-wing media outlets have named the CIA analyst as Eric Ciaramella, a 33-year-old career official who is fluent in Russian, Ukrainian and Arabic and was the top Ukraine officer at the National Security Council from 2015 to 2017.

The Washington Post has reported the fact of Ciaramella’s naming but has not itself made the name available to its readers. The Daily Beast charged that a former CIA operative, Derek Harvey—once a top aide to Iraq war commander David Petraeus, now an aide to Representative Devin Nunes, ranking Republican on the Intelligence Committee—has been providing Ciaramella’s name to right-wing web sites.

Trump himself spoke about the whistleblower to a group of reporters. “Well, I’ll tell you what. There have been stories written about a certain individual, a male, and they say he’s the whistleblower.” he said. “If he’s the whistleblower, he has no credibility because he’s a Brennan guy, he’s a Susan Rice guy, he’s an Obama guy.” Trump added, “And he hates Trump. And he’s a radical. Now, maybe it’s not him. But if it’s him, you guys ought to release the information.”