Tuesday night’s TV debate between heads of the established parties before the November 10 elections concluded Spain’s most right-wing election campaign since the fall of the fascist Francoite regime and the 1978 transition to parliamentary rule.

The debate unfolded amid brutal police repression of mass protests in Catalonia against Madrid’s jailing of Catalan nationalist politicians. This is part of an international wave of mass protests against social inequality sweeping Iraq, Lebanon, Algeria, Hong Kong, Ecuador and Chile, together with mass protests and strikes in Europe and the United States. However, none of the debate participants had anything to propose to address growing anger at social inequality, after a decade of deep European Union (EU) austerity in Spain.

Instead, the debate aired rabid, Spanish-nationalist denunciations of socialism and of Catalonia, led by the fascistic Vox party and the right-wing Popular Party (PP), to which the pseudo-left Podemos party and the ruling Spanish Socialist Party (PSOE) adapted themselves. They create a framework in which opposition on the PSOE’s left is suppressed, and the initiative is left to Vox. 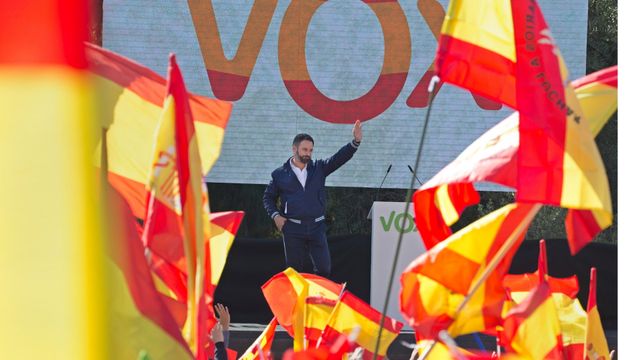 The leader of the fascistic VOX party Santiago Abascal waves in front of people waving Spanish flags in a rally to promote 'Spanish Unity' during a rally in Madrid, Spain, Saturday, Oct. 26, 2019. The VOX rally comes 2 days after the exhumation and reburial of Spanish dictator Gen. Francisco Franco from the Valley of the Fallen mausoleum outside Madrid to their new resting place at the Mingorrubio cemetery, 57 kilometers (35 miles) away. (AP Photo/Paul White)

The leading role in blocking left-wing opposition to the PSOE falls to Podemos which, like the rest of the political establishment, is terrified of the growing movement in the working class and determined to impose right-wing policies. Significantly, the journalists moderating the debate let Podemos’ general secretary Pablo Iglesias make introductory remarks to each segment of the debate.

“All economists of one or another persuasion effectively recognise that an economic slowdown is underway that could develop into a crisis,” Iglesias said in one part. In another, he said “the two-party system is over,” and appealed to the PSOE to “get together” with him.

Sunday’s Spanish election indeed unfolds amid an intractable crisis. It is the fourth since the December 2015 election led to a hung parliament, after which no stable governing majority could be formed. The PSOE-PP duopoly that emerged after 1978, and the end of the regime set up by fascist dictator Francisco Franco, is dead. There is every indication that a new hung parliament will emerge: the electorate is split between Podemos, the PSOE, the PP, Vox, the right-wing Citizens party, and Catalan or Basque nationalist parties.

However, Iglesias—whose party, since its foundation in 2014, has been an ally of the pro-austerity Syriza party in Greece—maintained his longstanding call to the PSOE to form a coalition government with it. The PSOE for its part has written to the EU Commission pledging to impose billions of euros in social cuts, irrespective of the election outcome. It is also pumping billions more into the Spanish armed forces and organizing the police crackdown in Catalonia.

Nonetheless, during the debate, Iglesias repeatedly criticized PSOE caretaker Prime Minister Pedro Sanchez for considering a possible PSOE-PP “Grand Coalition” government, and appealed to him instead to ally with Podemos. “You are making a mistake if you look to the right as an ally to finish with the Catalan problem,” Iglesias told Sanchez. Later, he again warned: “Maybe the Catalan issue could become the perfect excuse for the PSOE to look for a deal with the PP.”

With Podemos working to channel left-wing opposition behind the PSOE, the field was left open for Vox to promote its fascistic politics.

Vox leader Santiago Abascal—who has hailed the Francoite army’s bloody record during the 1936-1939 Spanish Civil War—pledged to suspend the Catalan government, seize its television stations, schools and police force, ban “criminal” parties and jail their members. Vox has already called to ban Marxist and regional-national parties in Spain, recently saying the Valencian-nationalist party Compromis, a Podemos ally, is “on the verge” of being banned.

Abascal also demanded a “drastic slashing of political spending from regional governments,” which fund much of Spain’s health and education spending. Abascal denounced regional governments for costing “60 to 90 billion euros.” While calling to gut health and education, he demagogically posed as a defender of “our workers” against “globalism,” issuing fascistic appeals for “secure borders” and “regulated … legal immigration.”

“You think Catalonia is a nation? For Mr Sanchez, Catalonia definitely is a nation, and Spain is a nation of nations,” Casado said, denouncing Sanchez for supposedly “embracing” a concept of Spain held by Catalan nationalists. Pledging to further slash income taxes, Casado warned: “Socialism always creates more crisis.”

Abascal also denounced Sanchez and Iglesias, referring to the historical ties of Podemos to the Stalinist Communist Party of Spain (PCE): “If someone here has something to hide about their history, it is you two.”

The target of these attacks on socialism are not the PSOE and Podemos, which are well-known parties of austerity and war, but the workers. The ruling elite is terrified that mass protests could evolve into an international struggle of the working class to take state power, overthrow capitalism, and build socialism. After more than a decade of mass unemployment, affecting over half of youth at its high point after the 2008 crash, Spanish capitalism is discredited. Bourgeois politicians all dread the impact of the next major crash.

The bourgeoisie’s turn towards fascistic politics and repression is a pre-emptive move against this danger. One cannot fight it within the existing party system, however: the PSOE and Podemos themselves help build the toxic framework in which Vox is rapidly rising. Vox is expected to double its vote, to 14 percent, and get 46 congressional seats.

The main factor enabling Vox to rise is the residual ability of the PSOE and Podemos to block a political struggle of the working class.

Sanchez’s main initiative in the debate was to point to his government’s repression of the Catalan protests and echo neo-fascist calls to crack down on the elected Catalan regional government. In Catalonia, he proposed taking over schools to “teach civic values”; to “modify the General Audiovisual Law” and to run Catalan television from Madrid, echoing neo-fascist calls to end Catalan-language TV; and to ban referendums like the 2017 Catalan independence referendum.

The response of Iglesias to Abascal and Casado was impotent and reactionary. On the one hand, he postured as a critic of their Spanish nationalism, declaring: “Spain is a nation of nations … Spain is a plurinational country, just saying it doesn’t make anything happen.” However, in line with his party’s reactionary national-populism, Iglesias insisted that he is more Spanish nationalist than Abascal: “Mr Abascal, you are not going to give me any lessons on how to be Spanish.”

In fact, granting basic democratic and linguistic rights to national minorities like the Basques and Catalans was an essential component of the move from fascist to parliamentary rule. The autonomy of regional governments was a key element of the bourgeois constitution adopted in 1978. The rise of Vox and the move of the entire ruling elite to set up unelected Catalan governments imposing the use of Castilian Spanish is bound up with the bourgeoisie’s repudiation of that settlement, and its turn to deep austerity and fascistic authoritarianism.

The perspective outlined by Iglesias for a Spanish-nationalist defence of linguistic minorities led by the PSOE is bankrupt and reactionary. The way forward is a struggle to turn the developing international movement in the working class and youth towards a defence of democratic rights and a revolutionary struggle for socialism and the United Socialist States of Europe.