On November 15, 1994, the US Trotskyist publishing house Labor Publications released Back In Time: My Life, My Fate, My Epoch, the memoirs of Soviet Left Oppositionist Nadezhda Joffe. The daughter of Adolf Abramovich Joffe, a leading figure in the October Revolution and close friend of Leon Trotsky, Nadezhda herself was a partisan of the Left Opposition and an active participant in the struggle against the Stalinist bureaucracy. 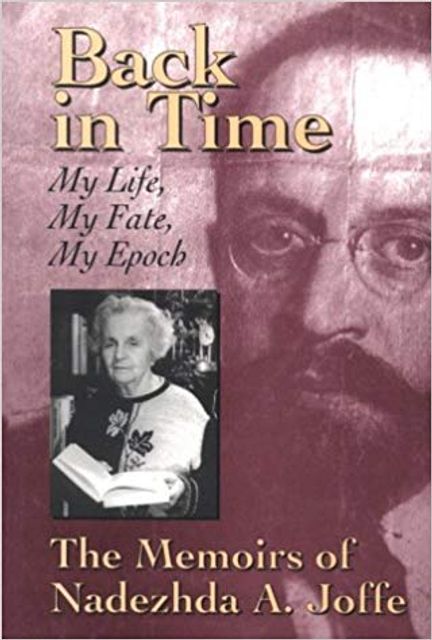 The defeat of the Left Opposition and the consolidation of power in the hands of the Stalinist regime led to the suicide of her father in 1927, the murder of her husband Pavel, and her own incarceration for years in Stalin’s labor camps. Her memoirs, written secretly in 1971-72, were not published in the Soviet Union until the late 1980s. They were translated into English by Frederick S. Choate after the author had left the USSR and moved to Brooklyn, New York.

To be accused of “KRTD,” the Russian acronym for “counterrevolutionary and Trotskyist activity,” signified all but certain doom. Those charged only with “KRD,” “counterrevolutionary activity,” could still hope to escape with five years in a labor camp. But the insertion of the “T” placed the victim in a realm from which no return could be expected, and these were the accusations leveled against Nadezhda Joffe.

While many condemned as KRTDs never in fact had any real association with Trotsky or the Left Opposition, Nadezhda Joffe certainly did. By the time she was 21, she had already gained significant political experience in the struggle against Stalinism. She did not consider herself a victim of the regime so much as an opponent. She understood the political motivations behind Stalin’s crimes and terror, and the historical continuity for which she was fighting.

“We wanted nothing for ourselves, we all wanted just one thing: the world revolution and happiness for all,” she wrote in her memoir. “And if it were necessary to give our lives to achieve this, then we would have done so without hesitating.”

The memoir provides the testimony of one who experienced, with a high degree of political consciousness, the most tragic events of the “unfinished” twentieth century. It represents a refutation of the post-Soviet school of Stalinist falsification and a reminder that countless thousands sacrificed their lives in the struggle against Stalinism, because they understood “that the socialism which had been built in the Soviet Union was not the same socialism about which the best minds of mankind had dreamed.” There was indeed an alternative to Stalinism, and a new generation of workers and youth must assimilate this history. Her memoir is available here.

50 years ago: Massive demonstrations against the Vietnam War

On November 15, 1969 over 500,000 people gathered in Washington DC to march against the Vietnam War. Demonstrations were held in other cities. Collectively the “Moratorium to End the War in Vietnam” protests constituted the largest political rallies in US history up to that point, with a total of about two million joining. They followed by one month a demonstration in Washington DC that drew 250,000.

The demonstrations were largely peaceful. At some, prominent musicians performed, including Leonard Bernstein, John Denver, the Cleveland String Quartet, and Pete Seeger, who led the protest in Washington DC in singing John Lennon’s “Give Peace a Chance.” In San Francisco, where about 250,000 turned out, more than half the area’s high school students skipped class and joined the demonstration. 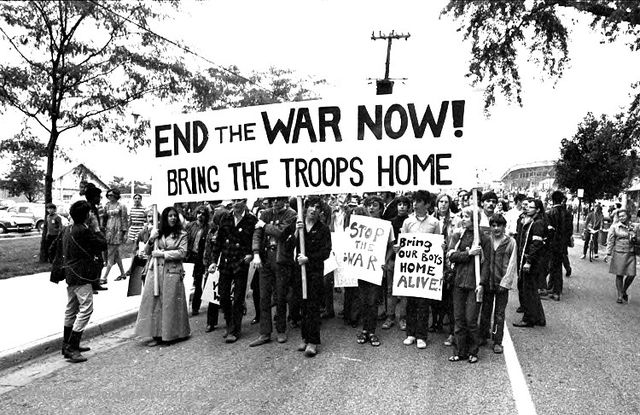 A 1969 Vietnam protest at University of Michigan

The Moratorium Committee deployed protest marshals to monitor the demonstrations and keep them within the framework of pressuring government officials, while opposing the raising of social grievances that could mobilize the working class, which was then mounting a strike wave against stagnating wages and inflation, caused in part by the Vietnam War. The Committee’s overriding aim was to redirect anger over the war back behind the Democratic Party, which, under John Kennedy and Lyndon Johnson, had launched the bloody war that had already killed tens of thousands of US soldiers and hundreds of thousands of Vietnamese.

Republican Richard Nixon, who defeated Johnson’s vice president, Hubert Humphrey, in the presidential election of 1968, had promised to bring the war to a victorious conclusion. Instead, he intensified the bloodbath on entering office in 1969. At the time of the October 15 demonstration, the Nixon administration made statements denouncing the protesters. It remained largely silent in the face of the far larger November 15 demonstrations. The New York Times reported that Nixon remained inside the White House for the entirety of the demonstrations, meeting with war advisors, and the next day watched football. Historians have found that in reality Nixon followed the protests obsessively.

By the time of the evacuation of Saigon in 1975, signaling the final American defeat in Vietnam, another 18,000 Americans would die. Well over two million Vietnamese, Cambodians and Laotians were killed.

On November 11, 1944, the last German troops in Greece were evacuated, marking the end of the Nazi occupation of the country that had claimed roughly 400,000 lives and provoked mass resistance.

The departure of the remaining Nazi soldiers came amid ongoing advances by the Soviet Union’s Red Army throughout Eastern Europe and a crisis of the fascist regimes. It followed the military defeat of most German positions in Greece the previous month. The soldiers that fled in November were from a handful of divisions that had maintained fortified positions in the Aegean Islands. 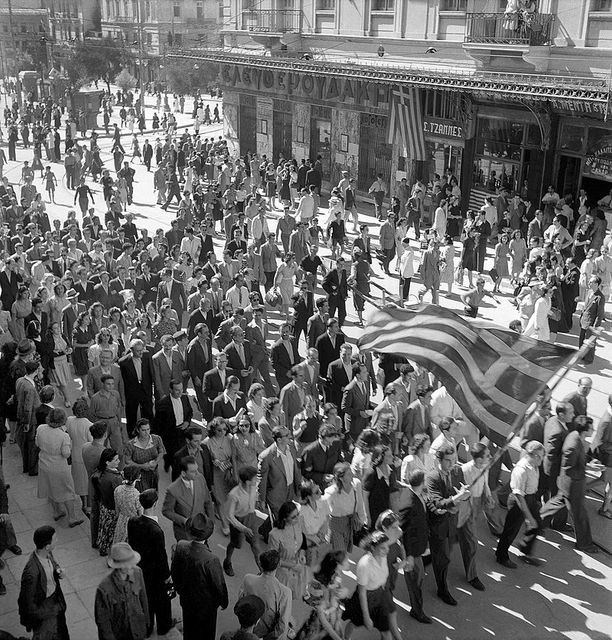 Italy had first sought to invade Greece in early 1940, but was unsuccessful as a result of determined military defense and the refusal of Bulgaria to assist. The failure of that operation prompted Germany to join with Italy in early 1941 in a massive military onslaught that overwhelmed Greek defenses. The country was then divided into three zones, under the control of the German, Italian, and Bulgarian military commands respectively. The German claim constituted some two-thirds of Greece.

The occupying Nazi troops promptly established a puppet government and trained Greek security forces, who functioned as death squads throughout the occupation, murdering anyone suspected of opposition, razing entire villages, and shipping the country’s Jewish population to Nazi extermination camps in Poland.

The brutal occupation provoked mass resistance. Isolated uprisings and guerilla attacks began as early as 1941. By mid-1943, the partisans, whose ranks included communists, anarchists and right-wing bourgeois-nationalists, controlled sizeable areas of the countryside, where they established “liberated zones.” The successful Allied invasion of Italy and the collapse of the Mussolini regime in 1943 prompted a crisis in the Greek occupation. The Germans responded by sending in elite divisions in a bid to ensure control of the country.

As the resistance expanded in 1944, the Nazis responded with mass reprisals. An estimated one million people were left homeless as a result of the destruction of entire villages. The occupation became increasingly untenable, however, as the Nazis lost control of ever-broader swaths of the country. They also recognized that they would not be able to repel an Allied invasion. This prompted German troops to begin a general evacuation on October 12, extending over the course of a month.

The Allies backed the creation of a conservative government headed by Prime Minister Georgios Papandreou. They, along with the Stalinist regime in the Soviet Union, were terrified that the partisans and workers would turn their fire against Greek capitalism and seek to establish a workers’ state. The USSR would support attempts to disarm the partisans. The deep-going social and political divisions would erupt, however, in the aftermath of the Second World War, in the Greek Civil War.

On November 11, 1919, Wesley Everest, a worker and a member of the revolutionary syndicalist Industrial Workers of the World (IWW or Wobblies), was lynched by members of the American Legion in Centralia, Washington.

Everett was involved in the defense of the IWW headquarters in Centralia earlier in the day, which had come under attack by World War I veterans organized in the fascistic American Legion during an Armistice Day march. Marchers had attacked the headquarters in the Roderick Hotel and broken into it. Wobblies, expecting violence, had armed themselves in self-defense. In the shootout five rioters were killed and several wounded. 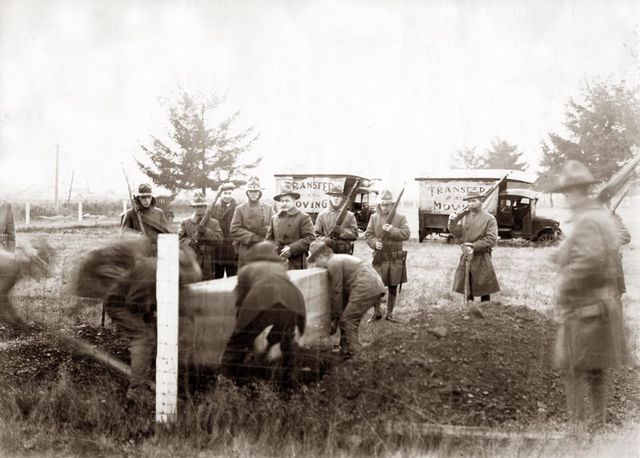 The IWW headquarters had come under attack in April 1918 during a Red Cross parade when thugs pulled out IWW members, beat several badly, expelled others from town and severely damaged the headquarters. Before the march on November 11, the owner of the Roderick Hotel had asked for police protection of his building, which the police refused. According to historian Howard Zinn, some members of the American Legion carried lead pipes, and other marchers carried nooses.

After the five American Legion members were killed, Wesley Everest fled but was captured, beaten and thrown in jail. All the other Wobblies present were also captured, and a well-known lawyer sympathetic to them, Elmer Smith, although he was not present at the headquarters that day, was also imprisoned.

Everest was seized from jail by a mob after the American Legion cut off electricity in the town and instructed cars to turn off their headlights so that they could work in darkness. Everest was brought to the Mellen Street Bridge over the Chehalis River where he was lynched. Some accounts allege that he was castrated first.

Everest’s body was cut down from the bridge and returned to the jail cell. No undertaker would accept his body, and the coroner, who had led the parade, refused to perform an autopsy.

A sensational trial of the Wobblies followed in which two were acquitted (including Elmer Smith), but seven were convicted of second-degree murder and sentenced to unusually harsh terms of 20 to 40 years. The sentence was upheld in the Washington state Supreme Court on appeal.