With 25,000 teachers voting on a new five-year agreement this Thursday and Friday, the Chicago Teachers Union (CTU) and its allies in the Democratic Socialists of America (DSA) are doing everything they can to silence opposition to the contract.

Rank-and-file teachers have told the WSWS Teacher Newsletter that the CTU is removing posts calling for a “No” vote from its CTU Members Only Group Facebook page. “Those who have spoken out are being censored, blocked, or had their posts deleted,” one veteran teacher told the Teacher Newsletter. “Vote no posts go up and get taken down. A conversation is not being allowed.”

Another teacher said, “They suppress members’ comments on their websites. Part of our dues go to pay for this site and the Members Only site. My comments have been removed, and I am being censored just for expressing my view,” she said.

The CTU shut down the 11-day strike on November 1 and ordered teachers to return to work before they voted on the tentative agreement. There is widespread opposition to the deal among teachers, parents and students because it meets none of educators’ central demands. Instead it phases in inadequate additional staff in some schools over the five-year contract, maintains bloated class sizes, provides no additional prep time and increases out-of-pocket healthcare costs.

This is entirely in line with Democratic Mayor Lori Lightfoot’s austerity budget. After the release of the deal it was revealed that the meager cost increases will largely be paid for through regressive property taxes. On Monday, the Chicago Tribune editorial board went further, demanding that the contract be financed by shutting down more schools and selling the properties to real estate developers. A five-year moratorium on school closings ended in late 2018.

In fact, the Fitch credit ratings agency noted CPS’ ability to enact mass layoffs and close schools “is important to our view of CPS' credit quality given its already limited expenditure flexibility and its reliance on uncertain state funding increases in future years to pay for the increased contract costs.” The agencies were otherwise pleased with the deal, maintaining positive or stable outlooks on the district. As Bond Buyer noted, “near term pressures are less of a concern as the new costs are minimal.”

Unable to conceal that the contract is unpopular, the DSA, which has members in the leadership of the CTU, is trying to discredit anyone who opposes the deal. Kenzo Shibata, a member of the CTU Executive Board and a leading DSA member, tweeted the following: “Hey I’m hearing that Socialist Alternative is trying to do a Vote No campaign on the current CTU TA [tentative agreement]. All I want to say to that is, DO NOT CONFUSE DSA WITH SOCIALIST ALTERNATIVE. DSA is not weighing in on this INTERNAL union matter. That is all.”

Immediately afterwards, Shibata added, “We (DSA) were the socialists who fed the strikers and students during the strike, not the socialists trying to tell CTU members how to vote. Please remember this.”

The Socialist Equality Party and WSWS Teacher Newsletter have principled and well-known political differences with Socialist Alternative. But the DSA’s denunciations of SA for calling for a ‘no’ vote are thoroughly reactionary. The claim that it is illegitimate for political organizations to intervene in “internal union matters” is an old anti-communist saw, long used by trade union tops to enforce the demands of management over the heads of workers through intimidation and red-baiting. 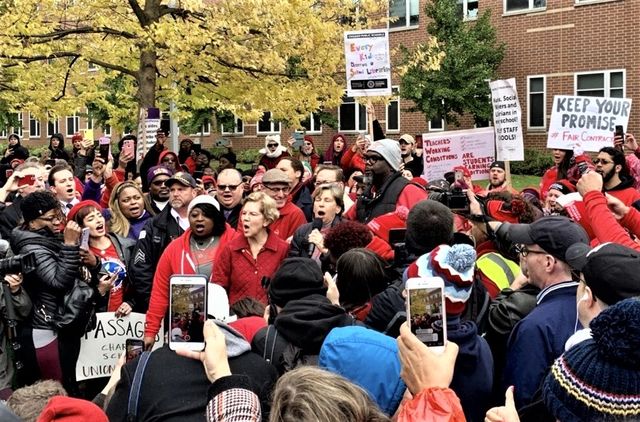 The DSA, which is a faction of the Democratic Party, of course, has no problem with joining the CTU in parading before teachers Democrats like Bernie Sanders, Elizabeth Warren, Joe Biden and other members of this party of Wall Street and the Pentagon.

The outcome of this battle is not an “internal union matter” but will have vast consequences not only for Chicago teachers but for workers and young people throughout Chicago and across the country. The DSA is reprising the role it played in all the teachers strikes since the wildcat strike by West Virginia teachers in February 2018: insisting that it is illegitimate for teachers to break free from the political and organizational stranglehold of the American Federation of Teachers and National Education Association, which have long imposed the austerity demanded by both corporate-controlled parties.

The DSA’s position is above all directed against the struggle by the Socialist Equality Party and the WSWS to bring a socialist perspective to teachers and fight for the development of new forms of working class organization, rank-and-file workplace and factory committees, which will fight to mobilize the broadest sections of the working class to fight for what workers need, not what the Democrats and the unions say is affordable.

The WSWS Teacher Newsletter called for Chicago teachers to expand the walkout to other sections of working class and prepare a general strike to defend the right to public education. Such an industrial counter-offensive, we insisted, had to be combined with a frontal assault by the working class on the concentrated wealth of the corporate and financial aristocracy. Only by fighting for a radical redistribution of wealth—a socialist program—would the resources be available not only for a vast improvement in public education but also for the eradication of poverty, homelessness and other social ills produced by capitalism.

Everything the CTU and its pseudo-left allies do is aimed at concealing this basic political reality. Instead, they have sought to revive the credibility of the unions on the basis of what they call “social justice unionism.” Despite the left-sounding rhetoric, this amounts to nothing more than providing the unions with a series of demands, largely couched in the language of racial and other identity politics, and organizing various public relations stunts before signing contracts that do not cost the corporate and political establishment a penny.

This was spelled out in a recent article entitled, “The Chicago Teachers Union is transforming Chicago,” which was published in Jacobin, the semi-official publication of the DSA. In it, Rebecca Burns argues that by merely advancing—but not winning—demands for housing assistance for new teachers and homeless students, hiring more support staff in “black and brown schools” and the establishment of “sanctuary schools” to protect immigrant students from ICE raids and deportation—the CTU has “changed” Chicago.

Despite the supposed “substantial gains” in the contract, Burns admits the “victories are less clear-cut when it comes to the key issue of support staffing. The district will begin hiring more nurses and social workers in the highest-need schools this year, but it will take five years before they’re guaranteed for every school. And while the CTU has highlighted that nine out of ten majority-black schools in Chicago do not have a librarian, the agreement creates a joint union-school district committee on ‘staffing equity’ that will provide a path—but not a guarantee—for high-need schools to hire additional librarians, counselors, or restorative justice coordinators.”

As it turns out, Burns goes on to admit, class sizes will remain high: “the union didn’t win on housing assistance for new teachers or gain the school district’s support for rent control” and the contract, in general, “still fell short of what many members had hoped to achieve…”

In other words, all the “social justice” demands were nothing but hot air to fool teachers, which the CTU and the DSA knew the Democratic Party would never agree to. In that sense, this charade is no different from various reforms Bernie Sanders, Alexandria Ocasio-Cortez and other DSA-Democratic Party politicians call for in order to build up illusions in the Democratic Party.

The teacher unions are relying on the DSA and pseudo-left organizations to provide them with a cover. CTU President Jesse Sharkey is a former member of the now defunct International Socialist Organization, which liquidated itself so its members could join the DSA and fully integrate themselves into the Democratic Party. Sharkey, who once boasted, “We are no longer a few people meeting in the basements of churches, but we are now a movement that commands national attention,” was recently featured in a 2020 campaign ad for Joe Biden, a war criminal and stooge for Wall Street.

Another article in Jacobin notes that a whole “social justice unionism” industry has been spawned involving sections of the trade union bureaucracy, academics at Georgetown, Rutgers and other top universities and various Democratic Party-aligned non-profit groups.

The organization’s key principles include, “Expand the scope of bargaining beyond wages and benefits,” “put forth demands that address structural issues, not just symptoms of the problem” and “center racial justice in your demands” by addressing “the role that employers play in creating and exacerbating structural racism in our communities.”

Throughout the teachers’ strike the CTU promoted Black Lives Matter Chicago and insisted that the assault on public education was primarily driven by racism, not the decades-long social counter-revolution pursued by the Democrats, along with the Republicans, to funnel untold fortunes into the pockets of the corporate and financial elite.

It is wholly in the interests of the Democratic Party and the grasping upper middle class elements in the trade union bureaucracy, academia and the business world to conceal the class nature of the attack on public education, and drive a wedge between black, white and immigrant teachers, students and parents. They fear nothing more than a unified struggle by the working class against the capitalist system because it would threaten their own privileged financial and political positions.

The DSA and former ISO leaders are vying for a far more prominent and active role in diverting and smothering social opposition, including in positions of state power. Like Syriza in Greece, whose rise to power is cited as an example of the “left’s” re-emergence, these figures hope to dupe the working class with their radical-sounding rhetoric in order to find their own way to affluence and influence within the capitalist system.

The WSWS Teachers Newsletter is hosting an online conference call for teachers today.