Demonstrations in Hong Kong this past week saw some of the worst violence during the nearly six-month protest movement as the police stepped up their repression of youth who had occupied university campuses as part of a student-led call for a city-wide general strike. In response, the authorities in Beijing and the military have issued thinly-veiled threats.

Xi added that the protests have “seriously challenged the baseline principle of ‘one country, two systems’”—a political red line for Beijing, which fears that the US is seeking to exploit the crisis to weaken China and its grip over Hong Kong. 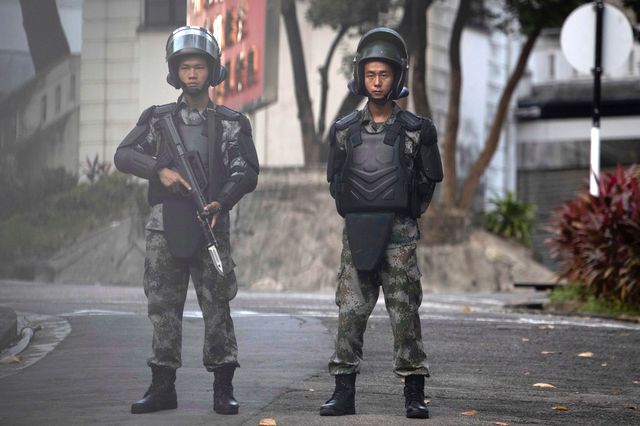 An armed soldier from China's People's Liberation Army (PLA) looks on during a confrontation between police and protestors at Hong Kong Polytechnic University from inside a nearby PLA garrison in Hong Kong, Sunday, Nov. 17, 2019. A Hong Kong police officer was hit in the leg by an arrow Sunday as authorities used tear gas and water cannons to try to drive back protesters occupying a university campus and blocking a major road tunnel under the city's harbor. (AP Photo/Ng Han Guan)

Though the protests have been driven by widespread anger at social inequality and lack of democratic rights and not by “outside forces” as Beijing claims, Xi’s government is still conscious that calls for “independence” in regions like Hong Kong, Tibet, Xinjiang, or Taiwan could be used by imperialism, following the pattern established in the Balkans in the 1990s.

On Saturday, approximately 50 People’s Liberation Army (PLA) troops left their barracks in Kowloon ostensibly to engage in volunteer clean-up work, removing debris and barricades in the streets near Baptist University. This is the first time PLA troops have been on the streets since the protests began in June, and as such is a menacing threat that they will be used against demonstrators. Typically, some 6,000 soldiers have been garrisoned in Hong Kong since 1997, though since the protests began Beijing has reportedly doubled that figure.

One of the soldiers stated that the Hong Kong government had not called out the troops to help in the clean-up effort. “We initiated this! Stopping violence and ending chaos is our responsibility,” he said, repeating the expression used by Xi Jinping. Some of the troops on Saturday wore t-shirts with the logos of the “Special Forces, Eighth Company” or “Xuefeng Special Operations Brigade.” These units are charged with fighting “terrorism.”

Hong Kong’s Garrison Law and Basic Law require the government to request support from the PLA to engage in police and security work. Supposedly the military is free to send troops to engage in “volunteer” work, according to previous statements by the city’s Secretary for Security John Lee.

Democratic Party lawmaker James To stated that he did not believe Beijing’s Central Military Commission had called out the PLA troops and inquired whether the city government had made a request for their assistance. “This time, it doesn’t look like voluntary service. It’s more like assisting the maintenance of public order,” To stated, raising the possibility that the troops' presence on the streets could lead to clashes with protesters. “They may say PLA soldiers have been attacked... then they can use heavy weapons. This is the most worrying thing.”

The exercise was almost certainly a calculated manoeuvre to gauge protesters’ response. Police had already begun full-scale assaults on the occupied universities in an effort to remove the barricades earlier in the week, and took control of the Chinese University of Hong Kong (CUHK) on Saturday. The students and youth at CUHK had blocked the north and southbound lanes of the Tolo Highway.

Clashes at other campuses also took place Saturday and Sunday, including at Hong Kong’s Polytechnic University, located in the city’s Hung Hom district in Kowloon. The university is situated near a number of major roads including a cross harbour tunnel. Reflecting the desperation many are feeling, one Polytechnic alumnus protesting at the university told the media that the students did not have a specific plan regarding the strike. “If we don't come out, no one will come out and protect our freedoms. Polytechnic University is my home,” he stated.

The demonstrations began to escalate after a demonstrator died on November 8 from injuries suffered earlier in the week. The 22-year-old student, Alex Chow, was found unconscious early November 4 after falling from a parking garage while fleeing from police tear gas.

Since then, others have suffered life-threatening or fatal injuries. A 70-year-old street cleaner was reportedly struck in the head by a brick on Wednesday, while allegedly filming a fight between protesters and pro-Beijing counter-demonstrators. He died the next day. A police officer was also reportedly struck by an arrow fired by a protester at the Polytechnic yesterday. Last Monday, a protester was shot in the chest by police, while a Beijing supporter was set on fire after getting into an argument with demonstrators. The former is in stable condition while the latter remains in critical condition.

In response to the campus occupations, the presidents of nine universities issued a statement denouncing the students. It stated, “No political viewpoint gives a licence to damage property, employ physical threats, or use violence against individuals. It is regrettable that societal disagreement has led to university campuses becoming major political battlefields, and that the government response has so far not been effective.” In other words, the government should employ even more violent means to dislodge the protesters.

The protest movement faces the threat of an intervention of the Chinese military and violent repression. Months of protests have demonstrated that the Hong Kong administration and Beijing have no intention of making significant concessions despite the determination and militancy of the demonstrators. The perspective promoted by the pan-Democrats and their allies in the trade unions and civic groups of pressuring the administration for reforms has proven to be a political dead-end.

To wage a political fight against the Chinese regime requires a turn to the working class throughout China. Workers and youth in mainland China confront similar issues: the lack of basic democratic rights and a worsening social crisis. To reach out to Chinese workers, students and youth should reject the narrow chauvinist outlook of Hong Kong “localism” and separatism and base their struggle on the fight for socialist internationalism.