Billionaire media and financial services mogul Michael Bloomberg announced Sunday morning that he was entering the contest for the Democratic presidential nomination, two days after his campaign purchased $37 million worth of television time for an unprecedented two-week advertising campaign to begin Monday.

Bloomberg, elected to three terms as mayor of New York City as a Republican and an independent, who registered as a Democrat only in 2018, aims to use his massive wealth to influence the outcome of the 2020 presidential election. He had previously pledged to spend at least $500 million to defeat Trump. He could spend far more than that in a bid to get himself elected.

The scale of the advertising campaign is truly staggering. The $37 million advertising “buy” completed Friday is more than the combined advertising carried out by all other Democratic candidates since the campaign began, with the exception of fellow billionaire Tom Steyer, who has pumped $32 million into promoting his own campaign over the past few months, with no noticeable result. 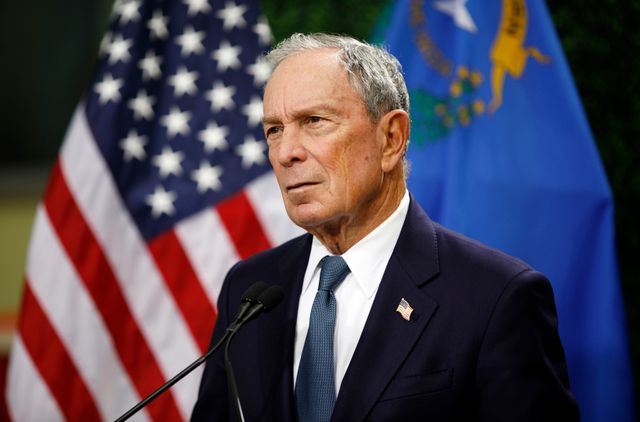 The $37 million Bloomberg spent last week is less than 0.1 percent of his estimated fortune of $53 billion, and yet it exceeds the $33 million war chest accumulated by Senator Bernie Sanders over the eight months since he launched his campaign. Sanders has the largest amount of cash raised from campaign contributions, almost entirely over the internet, but both Steyer and now Bloomberg have surpassed him in the size of their campaign kitty.

According to press reports citing advertising industry sources, Bloomberg’s campaign has bought up television time on an unprecedented scale. The New York Times called it “a show of financial force that signals his willingness to use his vast personal fortune to reshape the Democratic presidential race.”

Bloomberg has bought more than $100,000 in advertising time in 56 media markets, spread largely over the two dozen states that hold primaries on March 3 and the subsequent two weeks, when two-thirds of all Democratic convention delegates will be chosen. This includes ad buys of more than $1 million each in New York City, Los Angeles, Houston and Miami.

It seems dismally appropriate that Bloomberg’s campaign launch will take place during Thanksgiving week, already saturated by advertising for “Black Friday” sales. The billionaire candidate will be marketed like the latest Christmas toys and electronic devices, albeit with even less truth in packaging.

Under the campaign strategy outlined by his aides, Bloomberg will effectively concede the Iowa and Nevada caucuses and the New Hampshire and South Carolina primaries, the first four contests, held in February, which select a relatively small number of delegates, only 155 combined, but in the past have served to winnow the field of candidates.

Instead, Bloomberg will focus on television advertising in the 14 “Super Tuesday” states with primaries on March 3, which include California, Texas, Georgia, Virginia and Massachusetts, and the 13 other states that follow between March 7 and March 17, including Florida, Michigan, Ohio, Illinois, Missouri and Washington. These contests combined will select more than 2,400 delegates, about two-thirds of the total.

Bloomberg seeks either to buy the nomination for himself or accumulate a sufficient number of delegates to block the nomination of either of the two “left” candidates, Sanders and Senator Elizabeth Warren, who claim to support major tax increases on the wealthy.

Campaign aides to former Vice President Joe Biden, South Bend Mayor Pete Buttigieg and Senator Amy Klobuchar have already indicated that Bloomberg’s entry could help their campaigns, since his advertising will be largely aimed against Sanders and Warren and against supposedly “left” policies like Medicare for All and the Green New Deal.

Another possibility is that if Sanders or Warren should win the Democratic nomination despite his intervention, Bloomberg’s enormous advertising campaign could put him in position to run as an “independent” candidate and very likely throw the election to Trump.

His top campaign strategist, Howard Wolfson, has already tried to debunk criticism that Bloomberg’s campaign was driven by concern over a potential Sanders or Warren nomination. “He didn’t just wake up and say, ‘Oh my God, the socialists are going to be running the country; I better run for president,’” Wolfson said. “He woke up and said, ‘Oh my God, Donald Trump is going to be reelected; I better run for president.’”

Campaign aides cited a series of polls showing that Biden’s campaign was falling behind in Iowa and New Hampshire, and that Trump was now even with Warren and Sanders in many of the Midwest battleground states, including Wisconsin and Michigan.

It is clear that two factors have combined to spur Bloomberg to join a contest which he publicly disavowed last February. The first is the damage done to the Biden campaign by the revelations of the actions of his son Hunter Biden in Ukraine, where he raked in $50,000 a month serving on the board of a corrupt gas company, Burisma. While the Democrats intend to impeach Trump for seeking a Ukrainian investigation of the Bidens, the reporting on Hunter Biden’s role may have dealt his father’s presidential campaign a fatal blow.

The second factor is the rise of Elizabeth Warren in polls in all four of the February contests, and in national polls as well, and the recovery of Sanders since his heart attack in September. The combined support for the two candidates stands at close to 40 percent in most states, a clear signal that large numbers of voters are attracted by their attacks on social inequality and against the domination of American politics by corporations and billionaires.

Even though Sanders and Warren themselves are fervent supporters of the profit system—Warren says she is “capitalist to my bones,” while Sanders’ “socialism” is purely rhetorical—the financial aristocracy is fearful that even their watered-down appeals against corporate greed are too dangerous, under conditions of mounting struggles of the working class against big business.

In addition to his vast wealth, initially accumulated through the sale of data terminals used in every stock brokerage and financial office, Bloomberg has a thoroughly reactionary record as mayor of New York City from 2001 to 2013. He was particularly identified with the police-state tactic known as “stop and frisk,” under which working people, particularly blacks and Latinos, were subjected to arbitrary police harassment.

At the peak of “stop and frisk,” in 2011, police made 685,724 stops without a warrant or probable cause, nearly all involving men, and nearly 90 percent black or Hispanic, most without any result in terms of criminal prosecution. In only 0.15 percent of the cases, about one in 700 stops, was a weapon found.

Bloomberg adamantly upheld stop and frisk throughout his terms as mayor, and as recently as earlier this year, when he defended the program from criticism by civil liberties and anti-racist groups. But last Sunday, a week before he announced his presidential campaign, he visited a black church in Brooklyn to publicly “apologize” for stop and frisk and declare that he had been wrong.

According to press accounts, Bloomberg followed up the church service with a phone call to the Reverend Al Sharpton, who is always willing to provide a bit of absolution to a high-profile offender against workers and youth, provided a check is in the mail.

The ex-mayor’s financial empire will help his campaign with more than money. The entire editorial board of Bloomberg News has resigned, with seven of them taking lucrative positions on the staff of the Bloomberg for President campaign, in what amounts to a devastating exposure of the real nature of the capitalist press.

Bloomberg can also expect a friendly reception from the New York Times. Two members of its stable of columnists have already declared their gushing support, neoconservative Bret Stephens and Thomas Friedman, the leading editorial cheerleader for the Iraq War.

Friedman wrote that it was “nonsensical” that “‘billionaire’ has become a dirty word and a disqualifying status for many in the left of the Democratic Party.” He added that he wanted a Democratic candidate who would promote capitalism, “not one who tries to rile up the base by demonizing our most successful entrepreneurs.”

Bloomberg and his fellow oligarchs lay down the law: Not a penny more in taxes
[14 November 2019]