Wisconsin’s Democratic governor Tony Evers, ignoring opposition from environmental groups, the American Civil Liberties Union and multiple Tribal Nations, last week signed into law Assembly Bill 426. The legislation makes it a felony, punishable with a $10,000 fine and up to six years in prison, to protest, trespass or cause damage to “critical infrastructure,” including transmission lines, fencing, posts and oil pipelines.

In a Wednesday press conference after signing the bill, Evers, who ran in 2018 on a platform of “pragmatism and change,” admitted that he had “problems” with the bill, but they were not enough to stop him from signing the bipartisan bill which passed with overwhelming Republican support.

While he easily signed off on the pro-corporate bill, Evers has not announced any plans to push for legislation reversing the corporate handouts to Foxconn or the anti-worker Act 10 measures enacted by his predecessor Scott Walker in the face of mass protests in 2011. 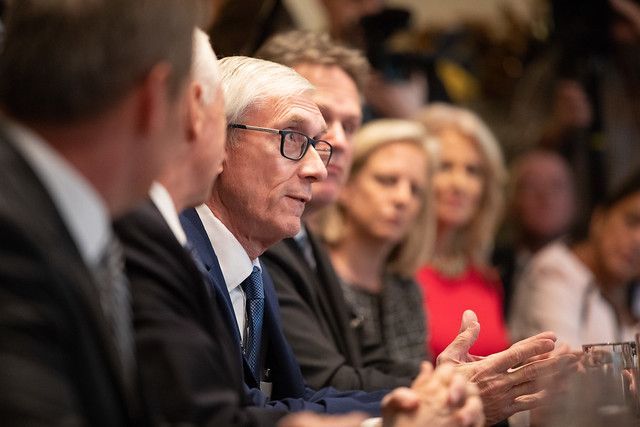 Democrats throughout the state, including State Senator Janet Bewely, tried to hide behind workers as justification for signing the bill. While she didn’t care to elaborate on workers’ safety in regard to the damage created by climate change, or the evisceration of safety regulations under Democratic and Republican administrations, Bewley instead focused on “workers on pipelines [who] feel more and more unsafe due to an increase in reported incidents of vandalism that jeopardize not only their safety, but the public’s safety as well.”

Assembly Bill 426 is based on the “Critical Infrastructure Protection Act” model bill which was distributed to state legislators by the American Legislative Exchange Council (ALEC). ALEC is a conservative “nonprofit” that derives over 98 percent of its funding from corporate goliaths such as AT&T, Exxon-Mobil, Koch Industries, Pfizer and Wal-Mart. “Model legislation” crafted by these corporations’ attorneys and lobbyists is distributed via ALEC to members of both parties for passage in legislatures across the country.

In audio obtained by The Intercept earlier this year, lobbyist Derrick Morgan, a senior vice president for federal and regulatory affairs for the American Fuel & Petrochemical Manufacturers (AFPM) association, a powerful lobby group, elaborated the purpose of these bills and how he was”intimately involved” in crafting the “Critical Infrastructure Protection Act.”

Speaking at a June conference in Washington, D.C. for the Energy & Mineral Law Foundation, Morgan explained that “this model legislation would itemize criminal trespass and also a liability for folks that cause damage during protest.”

While it is already a federal crime for individuals to destroy or impede the transportation of energy, this new legislation’s true purpose is to hold liable any political groups that work to organize protests or direct action against the corporations that are destroying the planet. Morgan noted, “[A]nother key aspect of it, which you also include, is inspiring organizations—so organizations who have ill intent, want to encourage folks to damage property and endanger lives—they are also held liable.”

By signing the legislation Evers made Wisconsin the tenth state to adopt legislation written by the oil companies which further enhances the power of the state in penalizing protesters. In fact, the Wisconsin law has the exact same language as “critical infrastructure” bills that have passed with bipartisan support in North Dakota, South Dakota, Oklahoma, Iowa, Louisiana, Indiana, Tennessee, Texas and Missouri.

The impetus for the passage of this and similar pieces of legislation was the 2016-2017 Dakota Access Pipeline protest, which took place on the Standing Rock Indian Reservation in North Dakota against Energy Transfer Partners’ plan to construct an oil pipeline under the Missouri River.

The Standing Rock protests won broad support from workers and students as over 10,000 protesters stood firm against the combined might of the capitalist state and multinational oil conglomerates. Live video feeds from the protesters broadcasted the brutality of private military contractors hired by the oil companies as they worked in conjunction with state troopers to violently suppress and beat workers, students and the indigenous population.

In addition to police from across the Midwest, federal agencies including the FBI were mobilized against the peaceful protesters. Together these various private and public agencies developed “intelligence reports” gathered through drone surveillance and infiltration of the protest movement. These dubious reports, gathered from social media feeds, innuendo and hearsay, were shared across police networks, which prompted violence against protesters including the firing of rubber bullets, water cannon and flash-bang grenades.

The protest movement was eventually dispersed following months of police violence, frigid temperatures and the lack of independent political leadership within the movement. The Obama administration worked closely with the leadership of the Standing Rock tribe, which is aligned with the Democratic Party, to shut down the protests and encourage everyone to “go home.”

Following the Obama administration’s intervention and the betrayal of the movement by its “leaders,” an evacuation order was given by North Dakota Governor Doug Burgum for the camp to disperse. Following months of protests, riot police violently dispersed the remaining demonstrators in February 2017.

The sight of thousands of workers, students and indigenous peoples united together against the class enemy has led to the concerted effort to pass the latest raft of anti-democratic laws. The intended purpose is not to protect the lives of oil and gas workers but to further criminalize and enhance the punitive measures against any group or person who resists the further degradation and destruction of the planet in the name of private profits.

Once again, the Democrats have shown that they have no fundamental differences with their partners in the Republican Party. Both serve the interests of private profit above all else. The fight against multinational oil corporations requires an international, anti-capitalist socialist strategy uniting workers across national lines against the corporations responsible for the continued destruction of the planet.