On Monday, a Honduran court sentenced seven men to jail for the murder of Berta Cáceres, a world-renowned environmental and indigenous rights activist, in March 2016.

The ruling follows a November 2018 verdict that the company DESA paid hit men hoping that the targeted assassination of Cáceres would quell the protests she led against the construction of the Agua Zarca hydroelectric dam.

Roberto David Castillo, CEO of DESA, is being tried separately as the “intellectual author” of the murder. 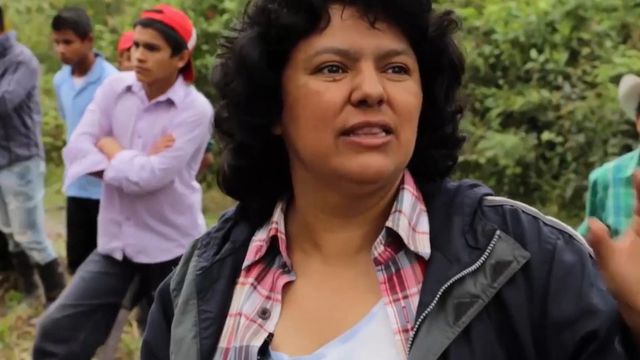 They hired a former Honduran special forces sergeant, Henry Javier Hernández, to lead a team of three hitmen to carry out the crime. All seven received sentences of 30 years and six months in jail for killing Cáceres, while the latter four got 20 more years for the attempted murder of Mexican activist Gustavo Castro, who was shot in the ear and played dead during the attack.

In the context of major strikes and demonstrations against education and health care privatization in Honduras and a resurgence of the class struggle across the continent, the outcome of the trial can only be described as a parody of justice, as US imperialism and its local stooges prepare to escalate their crackdown against social opposition.

In response to the ruling, Cáceres’s son Salvador Zúñiga declared Tuesday, “The idea they want to give now is that justice has been done because those in jail are the poorest. The ones with the economic power are the Atala Zablah family.” The richest of “The Five” oligarchic families of Honduras, the Atalas were never asked to testify, despite owning Inversiones Las Jacarandas SA de CV, the majority shareholder of DESA.

More broadly, however, Monday’s ruling provides window-dressing for the authoritarian and militarized forms of rule revealed in the case of Berta Cáceres, which were imposed by the 2009 coup backed by the Obama administration.

Cáceres herself declared in a 2014 interview that, “The same [then Secretary of State] Hillary Clinton, in her book Hard Choices, practically said what was going to happen in Honduras.” In a passage later erased from the book, Clinton wrote: “We strategized on a plan to restore order in Honduras and ensure that free and fair elections could be held quickly and legitimately, which would render the question of [ousted Honduran president Manuel] Zelaya moot…”

Since 2009, according to the Stockholm International Peace Research Institute (SIPRI), the Honduran military budget has tripled, to a proportion of the GDP not seen since 1990.

Today, the Trump administration is following this same framework to consolidate the US-backed coup in Bolivia. Similarly to Honduras in 2009, Washington is promoting elections in Bolivia overseen by the same fascistic regime using murderous military repression against mass resistance.

Cáceres led protests against the coup and denounced the fact that, shortly after taking power, the US-installed regime had handed out dozens of concessions for mining and dams. This included a 20-year permit to DESA to develop the Agua Zarca project and other dams on the Gualcarque river, which is considered sacred and is indispensable for the livelihood of the Lenca people, the largest indigenous group in the country.

In messages presented to the court, Daniel Atala Midence, DESA’s financial manager, told other executives in April 2013 that they had contacted the minister of security and other authorities to “eliminate those Indians.” Three months later, Honduran soldiers shot live rounds at a demonstration organized by Cáceres’s Council of Indigenous and Popular Organizations of Honduras (COPINH), killing Tomás García. DESA paid for the attorney who represented the soldier charged with the killing.

Atala Midence then texted in July 2013 that he “spent lots of money and political capital to get those three arrest warrants,” against Cáceres and two other COPINH leaders, which were thrown out by an appeals court.

After the murder, Atala Midence reassured Rodríguez about a cover-up: “Relax… don’t panic… Pedro [Atala] spoke to the security minister who said it was a crime of passion… We just need to keep working as normal.” Pedro Atala, one of DESA’s shareholders, is the brother of Camilo Atala, the billionaire owner of the Ficohsa bank, which, according to the text messages (although not their official records), also financed DESA.

The brothers Jacobo Nicolás and José Eduardo Atala Zablah both are members of DESA’s executive board. The first sits at the top of the BAC Honduras bank, while the second is the chairman of the Honduran-American Chamber of Commerce and a former director of the Central American Bank for Economic Integration (CABEI), another financier of DESA.

The Guardian reported in June 2016 that a hit list including Cáceres had been distributed to the military police in the Inter-Institutional Security Force (Fusina), which is armed and trained by the Pentagon and FBI.

Not only did the FUSINA police violently repress the thousands who protested the murder in the capital Tegucigalpa, but text messages of the DESA Security team—which killed Cáceres—show that they coordinated directly with FUSINA to attack mourners who travelled to the Gualcarque River in a procession.

As reported by Counterpunch, Sergio Ramón Rodríguez had also signed a contract with USAID three months prior to buy local support ostensibly through agricultural technical assistance.

Those openly financing the Agua Zarca project during the killing included the German companies Siemens and Voith-Hydro, the Dutch Development Finance Company, the Finnish Fund and the Central American Bank of Economic Integration.

The Chinese state-owned Sinohydro and the World Bank had been involved since 2006 in the broader plans to build the dams along the Gualcarque River, without consulting the Lenca indigenous communities. Amid growing protests over the flagrant repression in 2013, Sinohydro and the World Bank were compelled to abandon the project, earning Cáceres the 2015 Goldman Environmental Foundation Prize.

The mass demonstrations against her murder and the broader social anger against the privatizations, concessions, corporate tax cuts and social austerity imposed by the US puppet regime now headed by President Juan Orlando Hernández were channeled behind appeals to imperialist agencies like the Organization of American States (OAS) and into talks with the Hernández regime through the LIBRE party founded by Manuel Zelaya, the trade unions and the Popular Resistance Nacional Front (FNRP).

The assassinations of Cáceres and countless other activists and demonstrators since 2009 have been carried out to further regressive policies used to attract foreign capital to Honduras. These same essential policies are accepted by the entire political establishment and the trade unions. Settling accounts with the murderers in the Honduran state and the highest echelons of the country’s ruling oligarchy is possible only through the mobilization of the working class on the basis of a socialist program directed against capitalism and the nation-state system.