The ignominious fall of Kamala Harris

On Tuesday, US Senator Kamala Harris terminated her 2020 presidential campaign, becoming the highest-profile candidate to withdraw from the race so far. Harris’ ignominious end—less than 11 months after launching her campaign with great fanfare, and before the primaries have even begun—demonstrates the mounting inability of identity politics to mask a right-wing political record and program.

While attempting to strike a middle ground between the conservative Biden and the “progressive” Sanders and Warren, Harris ended up vacillating repeatedly and never successfully convinced working-class voters that she had anything to offer. In particular, her backpedaling after claiming to oppose private health care exposed her thoroughly corporatist outlook. Having ascended the political ladder and married a millionaire lawyer, Harris’s income placed her in the top 0.1 percent of society, rendering her occasional “left” populism a transparent fraud.

First announcing her campaign on Martin Luther King Jr. Day, Harris repeatedly invoked her identity as an African-American woman to try to cover over her reactionary political history, first as city prosecutor in Oakland and San Francisco, then attorney general of California, and finally as US senator since 2016. 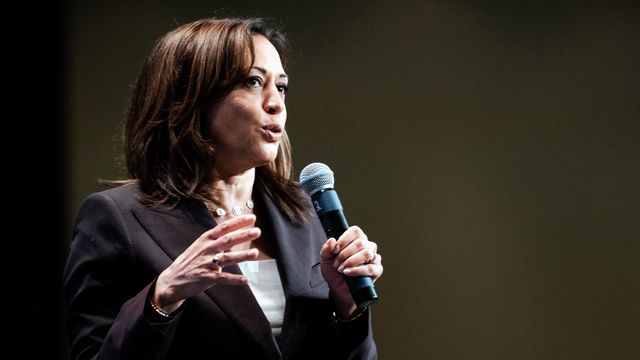 While in California, Harris was a strict “law and order” advocate. She sent countless working-class residents to lengthy prison terms, sponsored a law to send parents to jail when their kids were truant, and defended the rampant overcrowding of the state’s prisons even after the US Supreme Court declared this a form of “cruel and unusual punishment.”

Upon her election as US senator, Harris was quickly elevated into the leadership of the Democratic Party. Appointed to the Senate Intelligence Committee in 2017, she became one of the most fervent promoters of the anti-Russia campaign, spearheaded by sections of the Democratic Party and intelligence agencies as part of an effort to reorient foreign policy back towards confrontation with Russia. Harris was an early advocate for Trump’s impeachment, not due to any of his real crimes against immigrants and the working class, but due to bogus allegations of ties to the Russian state.

Harris was expected to run for president well ahead of her announcement and had been among the top five prospective candidates since at least December 2018. After announcing, she gradually rose in the polls, reaching her peak after the first Democratic debate on June 27 at which she verbally sparred with former Vice President Joe Biden, the front-runner for the Democratic nomination. Following that debate, she reached 15.2 percent in national polls, briefly placing her in second overall.

While Harris’s standing in the polls gradually began declining, a key turning point came at the second Democratic debate, when Harris’s reactionary record as attorney general was attacked by Tulsi Gabbard. After that debate, Harris sank below 10 percent in the polls and continued to fall, ultimately slipping to barely 3 percent.

Beyond her fall in the polls, the immediate reasons for Harris ending her campaign appear to be a collapse in her campaign finances and fundraising, and a desire to best position herself to be selected as a vice presidential running mate. In a public statement, Harris stated bluntly, “My campaign for president simply doesn’t have the financial resources we need to continue.”

Since the latest release of campaign finance data on September 30, multiple reports have surfaced indicating that the Harris campaign became increasingly cash-strapped, prompting the layoff of dozens of staffers in late October at her Baltimore headquarters. An aide to Harris confirmed with the New York Times Wednesday that the campaign would have had to go into debt in order to continue functioning.

While Sanders and Warren have been able to secure over $40 million and $30 million respectively in small donations of less than $200, Harris only raised roughly $14 million in small donations by September 30. Further, wealthy donors were more inclined to donate to Biden and Buttigieg, with the former publicly launching a super PAC at the end of October after stating he was opposed to super PACs. While Harris could have gone this route and openly appealed to the financial aristocracy, she evidently felt this was politically unviable. By then, according to one estimation, she was spending $1.41 for every dollar she raised.

In her resignation letter, Harris also wrote, “I’m not a billionaire. I can’t fund my own campaign. And as the campaign has gone on, it’s become harder and harder to raise the money we need to compete.” The reference to a “billionaire” candidate includes Trump, who has publicly raised over $165 million since the 2016 election, as well as Democratic candidates Tom Steyer and Michael Bloomberg.

Bloomberg entered the race on November 24 after purchasing $37 million in a television ad blitz, a greater sum than Harris had raised in her entire campaign. In the days prior to her campaign termination, Bloomberg surpassed Harris in polling, placing her in sixth place overall for the first time.

Concurrent with Harris, Steve Bullock, Joe Sestak and Wayne Messam have recently withdrawn from the Democratic race. There have already been complaints that the next Democratic debate, set for December 19 in Los Angeles, will have no candidates “of color,” given Harris’s withdrawal and the likelihood that Cory Booker, Julian Castro, Andrew Yang and Tulsi Gabbard have not yet qualified.

The leadership of the Democratic Party will undoubtedly work to ensure that either Harris, Booker, Castro or another minority candidate is selected as the running mate to add diversity to the ticket.

However, despite the efforts to entrench race and gender in American politics, the demise of Harris’s presidential bid highlights the inability of identity politics to gain a significant foothold within the working class. For the vast majority of the population, Harris’s constant invocations of her identity did little to convince them that she was in any way a progressive candidate. Rather, she was recognized as a pro-corporate Democrat, the stock-in-trade of the party as a whole.

The decades-long shift to the right of the Democratic Party culminated in the Obama administration, which oversaw the greatest transfer of wealth from the poor to the rich in US history, deported more immigrants than any previous administration, and became the first to remain perpetually at war. Harris, along with all the other Democratic Party candidates, defends this record of war, austerity and xenophobia that paved the way for the election of Trump in 2016.