On Thursday, 600 bus drivers and support workers for Fairfax Connector, operated by multinational corporation Transdev, went on strike. The Fairfax Connector drivers join 130 bus drivers and mechanics who operate routes for the Washington Metropolitan Area Transit Authority (WMATA) and who have been on strike since October 24. The striking WMATA, or Metrobus, workers are also employed by Transdev. 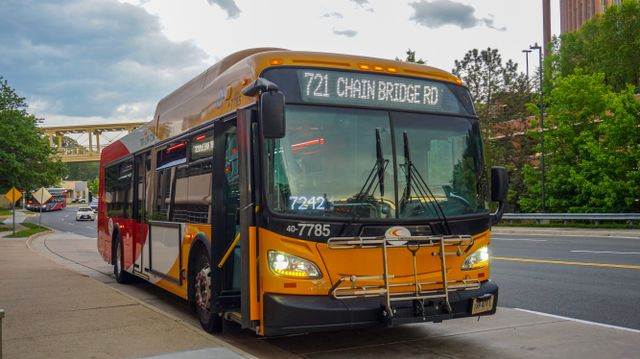 The 44-day old Metrobus strike is limited to only 18 out of the system’s 325 bus routes and does not involve any of the system’s six rail lines. Meanwhile, over 7,500 WMATA employees also represented by the ATU remain on the job, leaving the 130 Transdev employees isolated. The ATU is, in effect, scabbing on its own striking members by allowing the vast majority of the WMATA system to remain operating during the strike.

The ATU is seeking to limit the Fairfax Connector strike as much as possible, stating that the strike is over “unfair labor practices” and “bad faith bargaining” committed by the Company. It has offered no official demands. In response to the strike, Transdev has threatened to fire any worker who has gone on strike.

Both Fairfax County and WMATA are determined to see Transdev prevail as they both seek to push through further privatization of the D.C. area transit system. While Fairfax Connector has been run by private companies for more than a decade, the contract that WMATA awarded to Transdev in 2018, covering the 18 bus routes, represents the only portion of WMATA’s bus or rail lines that are privatized.

At the time it awarded the contract in 2018, WMATA said privatizing the 18 bus lines would save it $15 million over five years by relieving it of any pension and benefit obligations. Under its terms, Metro is paying Transdev $89 million over three-years, with two one-year options. As a result of the privatization, Transdev/Metrobus employees are paid on average $12 an hour less than WMATA employees and face healthcare deductibles of $6,000 for individuals and $12,000 for families.

Signaling its intent to expand privatization, WMATA is currently reviewing proposals from private companies to operate and maintain all trains, stations and facilities at a six-station extension of one of the rail lines, once it is completed in 2020. As with the privatization of the bus routes, WMATA’s move is a transparent attempt to attack workers living standards. In September 2018, WMATA General Manager Paul Wiedefeld explained that the use of a private company to operate the line would “hold down pension cost growth” which, he claims has “grown to unsustainable levels.”

Rather than seeking to unite all transit workers against the attempt by the transit agencies to expand privatization, the ATU has instead sought to play up differences between the striking Fairfax Connector workers and the striking Metrobus workers. In a Facebook statement from December 3, ATU Local 1764, which represents the Fairfax Connector workers, stated that “…our contract and the one Local 689 is negotiating at Cinder Bed [for the Metrobus workers] are very different. Different workers. Different local unions. Different governing agencies. Yet here we are on the verge of both units finding themselves on strike.”

The Facebook statement further reveals that the ATU is not fighting against privatization, instead urging either that Transdev “find itself a new business model” or that WMATA and Fairfax County “find themselves a new contractor tomorrow night.” As with other public sector unions, such as the American Federation of Teachers and the National Education Association, which have sanctioned the privatization of public education through charter schools, the ATU is fine with privatization and the resulting cuts in wages and benefits, so long as they can “represent” these highly exploited workers and ensure a continuing stream of union dues to their coffers.

Instead of spreading the strike to shut down the region’s transit system, which would largely bring the Federal Government to a halt, the ATU is leading the workers at both transit agencies into a dead end. As with the 40-day General Motors strike in the fall, the ATU is using the Metrobus strike to wear workers down in order to force through a concessionary agreement, which will only embolden WMATA to both cut into the living standards of WMATA workers and to expand its privatization efforts.

The ATU, as with all American unions, is tied to the capitalist Democratic Party. In numerous Facebook posts ATU Local 689 has fawned over various letters from Democratic Party officials to WMATA’s General Manager. Despite their holiday phrases of “support for the workers”, the letters ask no more than that WMATA “choose its contractors wisely” while asserting that privatization has “been made with an eye toward financial stability” as one such letter from Virginia Congressional Democrats Gerald E. Connolly, Donald Beyer, Jr. and Jennifer Wexton from November 20 states.

The last thing the ATU and their Democratic Party backers want is for the working class to assert its interests as an independent political force. Despite the bitter factional struggle being waged in Washington over impeachment, both Democrats and the Republican Trump administration are terrified by the growth of the class struggle.

Striking Metrobus and Fairfax Connector workers must be warned—your strikes will not be won if they remain in the hands of the ATU. What is required is a complete break with this pro-capitalist organization. D.C. transit workers must form independent rank and file committees and immediately expand the strike to all transit workers. Striking workers must reach out to as broad a section of the working class as possible. If the aims of the strike are made clear to the wider working class, it will gain a great sympathy and have the potential for a broader struggle.

Immediate demands of the transit worker rank and file committee should include an end to all transit privatization, pay equity for all workers doing the same work, full pension and fully paid healthcare, and pay increases to compensate for all prior concessionary contracts. Further, demands should include billions in additional funding to provide for vitally necessary improvements in public transportation.

These demands can only be won if transit workers understand the political issues raised in their struggle. Transit workers are not fighting simply a multinational company or a given transit agency, but the entire capitalist class, including its representatives in the Democratic Party. This requires workers advance an independent socialist strategy.