Finland’s prime minister, the Social Democrat Antti Rinne, was forced to resign last week after disagreements erupted within his five-party coalition government over the handling of a nationwide strike by 10,000 postal workers. His Social Democratic successor, Sanna Marin, took office yesterday amid three days of strikes by over 70,000 workers in the technology and industrial sectors.

The two-week strike at the national postal service Posti was triggered by the revelation that 700 parcel delivery workers would be transferred to a collective agreement with an outsourced subsidiary of Posti, resulting in wage cuts of up to 30 percent. In response, thousands of transport workers launched a solidarity strike, resulting in the cancellation of some 300 flights by national airline Finnair.

The upsurge of class struggle in Finland is part of an international process that has seen strikes and protests spread across every continent over the past two years. The issues driving the strike wave in Finland—savage austerity, rising inequality, attacks on wages, and growing opposition to the entire political establishment—are the same as those radicalising working people around the world. The strikes continuing in the technology sector this week are in opposition to a push by the employers’ organisation to enforce a wage increase of 0.5 percent for 2020, which amounts to a cut in terms of real wages. 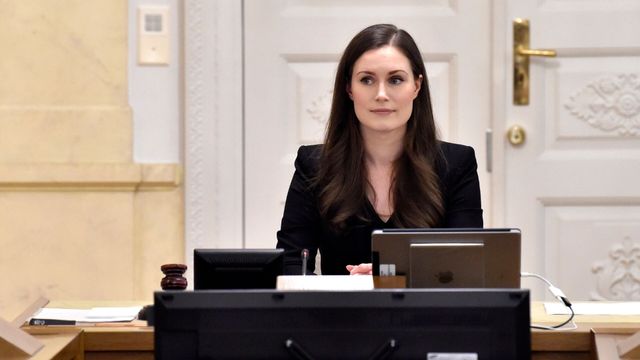 The broad support for the postal workers was driven by sustained austerity measures implemented by successive governments aimed at gutting public services and deregulating the labour market.

Faced with the threat of Finland’s ports being shut down by a sympathy strike, which would have hit corporations hard in a country where 40 percent of GDP is made up of exports, Posti management withdrew the outsourcing proposal in late November. Shortly before the final deal was reached, Prime Minister Rinne demagogically asserted that workers’ rights would not be trampled underfoot while his government was in office.

This comment proved too much to bear for the Centre Party, the second-largest party in Rinne’s coalition. A liberal party with a predominantly rural support base, Centre enforced sweeping spending cuts and attacks on wages and working conditions under Prime Minister Juha Sipilä, who ruled between 2015 and 2019 in coalition with the right-wing National Coalition Party and the far-right Finns Party. Centre Party leader Katri Kulmuni denounced Rinne, a former trade union leader, alleging that he had sided with the workers in the postal negotiations when it was necessary to remain neutral.

After extended government talks, the Centre Party withdrew its support for Rinne and threatened his government with a vote of no confidence, prompting the Prime Minister to resign on 3 December. Marin, the new Prime Minister, was Transport Minister in Rinne’s cabinet, while Kulmuni will occupy the post of Finance Minister.

The end result of the change of faces in the Finish government will thus be a political turn to the right. Behind all the hype about the country having the world’s youngest prime minister, a coalition made up of five parties led by five women and a government pledge to make the country carbon neutral by 2035, the SDP-led government will deepen the assault on working people and public services.

Marin has already stated her determination to implement the coalition’s goal of eliminating Finland’s budget deficit over the coming four years. This is to be accomplished through the privatisation of more than €2 billion of state assets and a reform of social services and health care designed to expand the involvement of the private sector.

However, the government lacks any popular support for these policies. Earlier this year, the Centre Party lost a third of its support in parliamentary elections after presiding over savage austerity for the previous four years. Particularly unpopular was the Sipilä government’s Competitiveness Pact, which, with trade union support, imposed wage freezes, cuts to holiday pay and three additional days of work per year for public sector workers without any corresponding wage increase.

The election was a blow not just to the Centre party, however. For the first time in over a century, no party managed to obtain more than 20 percent of the vote. This underscores that the vast majority of the population is not only hostile to the austerity imposed by the political right, but alienated from the entire political establishment.

The SDP, which emerged as the winner of the election with just 17.7 percent of the vote, a slight improvement on its worst ever result in 2015, moved swiftly to form a coalition with the widely-despised Centre Party. They were joined by the Green League, Left Alliance, and Swedish People’s party. The Finns, which conducted a racist, anti-immigrant election campaign, finished just 0.2 percent behind the SDP in second place.

Although the coalition is typically referred to as centre-left, it has embraced most of the key demands of big business. Barely two months after Centre Party Prime Minister Sipilä had been forced to tender his resignation in March due to the failure of his government to pass its health care reform in parliament, Rinne’s SDP-led government announced in late May that it would implement largely the same health care reform. The plan will put an end to the running of health care services by over 290 local municipalities across the country by placing health care under the control of 18 elected regional governments. These authorities will have the option of engaging third sector and private health care providers to offer certain services, a move being dressed up as improving patient choice.

While the Green League and Left Alliance made much of their opposition to the Centre Party’s drive to privatise health care when they were in opposition, both parties signed up to the slightly revised plan. As Green League leader Pekka Haavisto put it, “Third sector and private services can be used, but this will be left to the self-governing areas to decide how much.”

The five-party coalition is also committed to increasing the employment rate to 75 percent from its current level of 72 percent by the end of its term in office. Given that economic growth is set to slow to less than 1 percent over the coming years due to trade tensions, Finance Ministry officials recently suggested that cutbacks to social security and the further deregulation of the labour market would be necessary to force more people into work.

The SDP-led coalition will also continue the previous government’s deepening military partnership with US imperialism. Finland, together with the other four Nordic countries, Denmark, Iceland, Norway and Sweden, signed a Nordic Defence Agreement aimed at Russia in 2015. One year later, Helsinki concluded a bilateral defence partnership with the US, and in 2018, the US, Finland and Sweden announced an enhanced trilateral statement of intent to coordinate the three countries’ defence policies. These agreements have been backed by a military rearmament program, including the purchasing of US-built F18 fighter jets and other modern equipment that is interoperable with NATO members.

Although Helsinki remains outside of NATO, it signed up as one of NATO’s Enhanced Opportunity Partners in 2016. Finnish soldiers took part in NATO’s Trident Juncture exercise last year, the largest of its kind since the end of the Cold War. Like previous governments, the current coalition is unlikely to push for full membership. A majority of Finns oppose joining the military alliance. At the same time, sections of the ruling elite rely on economic ties with Russia, with which Finland has a 1,300 kilometre border.

The leading role of the Social Democrats and Left Alliance in enforcing such a reactionary program is entirely in keeping with the political records of both parties. Following an economic crisis in the early 1990s, it was an SPD-Left Alliance government that prepared Finland for membership in the euro, which required imposing attacks on the working class. Then, after the global economic crisis of 2008 threw the export-dependent Finnish economy into recession, the SDP and Left Alliance joined the conservative-led government of Jyrki Katainen in 2011. Katainen’s government supported the enforcement of vicious EU-dictated austerity in Greece and Portugal, while enforcing budget cuts at home amounting to 5 percent of the national budget. It also initiated closer Nordic defence cooperation to support US imperialism’s aggressive encirclement of Russia.