A tentative $13.5 billion settlement was announced Monday between Pacific Gas and Electric (PG&E) and lawyers representing the victims of multiple deadly fires caused by the company’s negligence and dilapidated infrastructure. The amount is a slap on the wrist considering that the fires involved—including the 2018 Camp Fire, the 2017 Tubbs Fire, the 2016 Ghost Ship warehouse fire and the 2015 Butte Fire—collectively killed 145 people and destroyed over 25,000 buildings. Lawyers for the victims stated in July that claims against PG&E for the Tubbs and Camp fires alone totaled $54 billion.

Upon filing for Chapter 11 bankruptcy last January, PG&E cited more than $30 billion in potential liability costs from the numerous victims of wildfires caused by its faulty equipment. Prior to the $13.5 billion settlement, the company agreed to a separate $11 billion settlement with insurers and another $1 billion settlement with cities and counties affected by the fires. In response to the latest announced settlement, PG&E shares rose 18 percent over the weekend, reaching their highest point in months.

At the last minute, victims of the Tubbs Fire, which killed 22 people and destroyed thousands of homes across Sonoma County, were incorporated into the settlement package. PG&E has always denied its responsibility for the Tubbs Fire, but recently a California Superior Court judge allowed the victims’ case to move forward, with a trial set to begin in January. Knowing they faced up to $18 billion in liabilities for this fire alone, PG&E moved swiftly to include these victims in the $13.5 billion settlement. 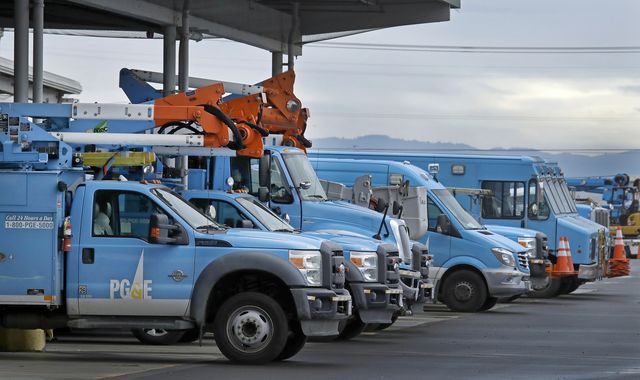 In a filing with the Securities and Exchange Commission (SEC) Monday, PG&E announced that a $13.5 billion trust would be gradually established to pay for all claims involved, initially with $5.4 billion in cash, to be set up upon the company’s exit from bankruptcy. PG&E would add $650 million in January 2022 and $750 million the following year. The rest of the trust would be comprised of $6.75 billion in common stock of PG&E, whose value has plummeted in recent years and is forecast to continue to slide as the company does little to fix its infrastructure and climate change increases the likelihood of devastating wildfires in the coming years.

At this point, over 30,000 people have filed as claimants in the case. The deadline for victims to file was recently extended to the end of this year, with as many as 70,000 unaware that they could file. Federal and state agencies have already filed claims for $6.5 billion, which will be taken from the $13.5 billion, leaving roughly $7 billion for victims. With the victims’ lawyers expected to take at least 30–40 percent, the amount of cash given to victims that lost family members and their homes could be as little as $10,000, which will do nothing to make them whole.

The deal is now being reviewed by California’s Democratic Governor Gavin Newsom, who will announce by Friday whether the settlement would meet the requirements of Assembly Bill 1054. The bill, which was supported by the overwhelming majority of state Democrats last summer and signed into law by Newsom, created a $21 billion wildfire fund to bail out California’s utility monopolies found responsible for future fires. PG&E’s bankruptcy has disqualified them from having access to this fund which effectively sanctions the corporation’s murderous and destructive practices.

If Newsom approves of the settlement, it must then be approved by a federal bankruptcy court judge, which would facilitate PG&E’s rapid emergence from bankruptcy and access to the wildfire fund.

Since coming into office this year, Newsom has demagogically postured as an opponent of PG&E, in particular during the recent mass power shutoffs to which the company repeatedly subjected millions of residents across the northern two-thirds of the state. Newsom’s duplicity, however, is exposed by the fact that he took over $200,000 in campaign funding from PG&E and has sponsored legislation exempting legal liability for electrical utilities that cause wildfires. His fulsome support for AB 1054 prompted its swift passage, allowing the utilities to further offload wildfire liabilities onto taxpayers.

Days before the settlement was announced, the California Public Utilities Commission (CPUC) released a report finding that PG&E has routinely failed to inspect and repair its lines for years, in violation of state rules and regulations. On the day of the report’s release, PG&E finally acknowledged their culpability in the Camp Fire, the deadliest fire in state history, which killed 85 people and destroyed the entire town of Paradise.

For decades, PG&E has allowed its infrastructure to deteriorate, to the point that the average age of their electrical towers is now over 68 years. The CPUC report found that the transmission tower responsible for starting the Camp Fire was 100 years old. In addition, the company has continually de-funded their brush-clearing and other fire mitigation programs, in turn making them responsible for starting well over 2,000 wildfires in the past decade alone.

Each time that PG&E has been made to pay for its criminal practices, the state has stepped in to facilitate their offloading of costs onto consumers, so that today their rates are significantly higher than the US average. Through this process, PG&E has profited immensely, garnering $13.5 billion in net profits from 2006–2017 alone.

Instead of investing in their infrastructure during this critical time period, as their lines caused ever more devastating wildfires, PG&E chose to pay out nearly $10 billion in dividends to shareholders. Provocatively, amid this year’s bankruptcy and facing universal hostility among California residents, PG&E attempted to give $16 million in bonuses to its top executives but was prevented from doing so by the bankruptcy judge.

PG&E’s executives and board members have nothing but contempt for the tens of thousands of victims who have lost their loved ones, their homes and their prized possessions, and who have been scarred by their traumatic experiences. For these victims to be made whole, the company must be expropriated by the working class and run democratically in order to provide for the energy needs of the entire population, not the profit interests of their wealthy shareholders.