Amid turmoil in short-term money markets

The US Federal Reserve has kept interest rates on hold, after three cuts of 0.25 percentage points since July, and indicated that it has no plans for any increases in the foreseeable future.

The unanimous decision by the interest-rate setting Federal Open Market Committee (FOMC), the first since a meeting in May, came at the end of what could be characterised as the year of a great reversal—a U-turn carried out at the dictates of financial markets that the central bank must lock in a continuous supply of cheap money. 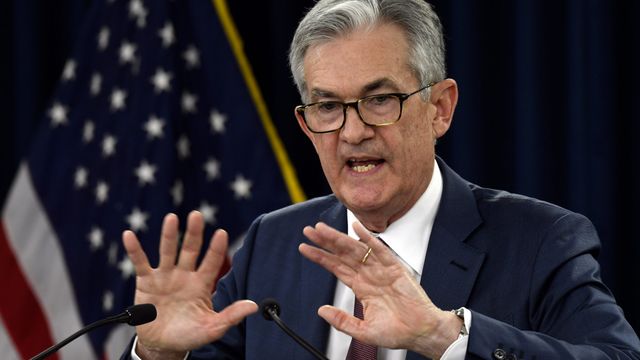 At the end of 2018, having raised interest rates four times, the Fed indicated further rises were planned for this year in an attempt to “normalise” monetary policy. But those plans were reversed when the markets went into a tailspin last December, with stock markets experiencing their worst result for that month since 1931.

After carrying out its third interest rate cut in October, the Fed kept rates on hold yesterday. The decision had little impact on the stock market because the hold decision had been widely expected amid the removal of any threat to raise them.

As the Financial Times noted, in September there were “seven Fed presidents or governors proposing a rate above 2 percent for 2020” (compared to the present rate of 1.5-1.75 percent) but “now there are none.”

The FOMC changed the language accompanying the decision, saying its decision was “appropriate” and cutting a reference to “uncertainties” in the economic outlook. It said it would monitor incoming information “including global developments and muted inflation pressure.”

The reference to “muted inflation” can be seen as a pledge that no rises are planned for the future as the Fed’s preferred measure of inflation remains around 1.6 percent—below the target level of 2 percent.

It also indicates that fears of a spike in inflation resulting from a wages push, because of a fall in the official level of unemployment to 3.5 percent, have dissipated. This is because despite the low official jobless rate and the rise in employment numbers, the bulk of new jobs are at low wage rates.

As the WSWS reported on Tuesday, wages have begun to backslide throughout 2019 with a recent study by the Brookings Institution reporting that 44 percent of US workers are on low wages.

Besides the interest rate cuts, this year also saw another major reversal by the Fed responding to the demands of financial markets. This time last year the Fed had set in place a program to reduce its accumulation of financial assets that had risen to more than $4 trillion, from around $800 billion before the 2008 crash, as a result of quantitative easing (QE). The reduction of the asset pile at the rate of $50 billion a month was described by Fed chair Jerome Powell as being on “autopilot.”

As a result of opposition in financial circles, the wind-down was ended in July. Now the Fed has begun to expand its balance sheet—in effect a return to QE in another form—as a result of turbulence in the repo market when interest rates in mid-September spiked from their normal level of around 2 percent to reach 10 percent in some cases.

The spike immediately sounded alarm bells because the freezing of this market, estimated to be around $1 trillion, was a significant factor in the financial crash of 2008.

The repo market is a crucial mechanism for providing liquidity to the financial system by supplying overnight cash to banks and other financial institutions. The organisations requiring funds obtain them by offering financial assets as collateral, usually Treasury bonds, in return for cash. The firms receiving cash agree to repurchase (hence “repo”) the asset at a slightly higher price the next day or shortly thereafter, with the higher price reflecting the interest on the loan. The Fed aims to keep the repo rate within its base interest rate target range.

The spike in repurchase rates saw immediate action from the Fed with a decision to inject billions of dollars into the market. Yesterday, for example, Reuters reported that the New York Federal Reserve had accepted “$42 billion in overnight bids from primary dealers in a repurchase agreement (repo) operation meant to keep the federal funds rate within the target range” following a similar intervention on Tuesday.

The major banks maintain the ongoing turbulence in the repo market is the result of regulations, introduced as a result of the financial crisis, that require them to hold larger cash reserves in order to ensure their stability. They want the requirements loosened.

The continued intervention of the central bank into the repo market counters the claim that the September spike was due simply to temporary factors, including the need to raise cash to make corporate tax payments that had fallen due.

In a report issued on Sunday, the Bank for International Settlements, a consortium of the world’s major central banks, concluded that the spike was not a passing phenomenon. It said the reasons for the dislocation had been “extensively debated” with explanations including a due date for corporate taxes and a large settlement of US Treasury securities. “Yet none of these temporary factors can fully explain the exceptional jump in repo rates.”

The report concluded that “increased demand for funding from leveraged financial institutions (e.g., hedge funds) via Treasury repos appear to have compounded the stress of temporary factors.” It warned that “any sustained disruption in this market, with a daily turnover in the US market of about $1 trillion, could quickly ripple through the financial system.”

Summarising the conclusions of the BIS report, the Financial Times reported that an increasingly popular hedge fund strategy has been to buy US Treasuries while selling derivatives contracts, such as interest rates futures and “pocketing the difference in price between the two.” However, on its own, this was not very profitable because of the close relationship in price between the two sides of the trade.

“But people active in the short-term borrowing markets say that to fire up returns, some hedge funds take the Treasury security they have just bought and use it to secure cash loans in the repo market. They then use this fresh cash to increase the size of the trade, repeating the process over and over and ratcheting up the potential returns.”

In other words, the shortage of cash in the repo market, leading to interest spikes, has been caused, at least in part, by the actions of hedge fund speculators obtaining money to juice up their returns in a continuous loop. The intervention by the Fed into the market means it is effectively funding this spiral of speculation.

At his press conference announcing the Fed’s latest decision Powell said the “economic outlook remains a favourable one.” But the situation in financial markets—the rise of increasingly risky corporate debt and the turmoil in the short-term money market to cite just two examples—indicates that the conditions are being created for another financial disaster.

Speaking on the BIS report, the head of its monetary and economic department, Claudio Bario, said there was a prospect of “unfamiliar market dynamics” and the September dislocation could mean repo markets “may again find themselves in the eye of the storm should financial distress arise at some point.”