Workers and youth should take warning from the publication by billionaire media oligarch Rupert Murdoch’s the Sun of explicitly far-right propaganda issued by military figures in the week before the UK general election.

On Saturday, the Sun published, “‘Hijacked Labour’: Ex-British intelligence officers say Jeremy Corbyn is at the centre of a hard-left extremist network.” 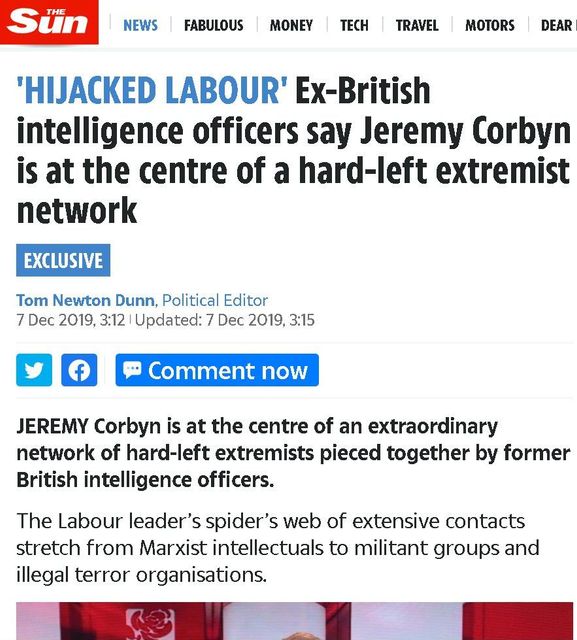 The article by Tom Newton Dunn in the Sun

The article by political editor Tom Newton Dunn promoted the claims of “former British intelligence officers” that Labour Party leader Corbyn “is at the centre of an extraordinary network of hard-left extremists.”

Newton Dunn reproduced, with hyperlinks, a chart “drawn up by the ex-military veterans in their spare time.” The group calls itself “Hijacked Labour.” The chart gives short summaries of some 490 individuals and organisations, lumping them together as part of an “extreme network who are now very close to running the country.”

Many of the chart’s political summaries were sourced from neo-Nazi websites. Author Daniel Trilling pointed out in the Guardian that the entry on British anti-fascist magazine Searchlight cited the Aryan Unity website, and the chart recommended a critique of Antifa from anti-Semitic conspiracy website, the Millennium Report. None of this elicited any comment from the Sun.

The Socialist Equality Party and the World Socialist Web Site are both identified. In the section of the chart on the “Militant Left”, it states the SEP is, “Rather left wing, in fact classic old, hardline Marxist-Leninist, keen on revolution. Supported by the website World Socialist Web Site (WSWS). See this artcile [sic] https://www.wsws.org/en/articles/2016/11/21/corb-n21.html in which they are very critical and scathing about Corbyn's politics.”

Trilling noted that a larger version of the chart, previously appearing as “The Traitor’s Chart,” had featured high-profile journalists. Before it was taken down, the chart had also been promoted by right-wing websites. James Delingpole, the UK editor of far-right news outlet Breitbart, praised it as evidence of the scale of what he denounces as “cultural Marxism.” The revised chart reappeared as Hijacked Labour shortly afterwards, and was immediately picked up by the Sun.

The explicit purpose of Hijacked Labour is to target political dissent or opposition from the left. Newton Dunn quotes without comment the group’s statement that Labour “is no longer the patriotic party of Attlee or Wilson. Today’s Labour has been hijacked by Marxists. Vote wisely, Compatriots. Your Country Needs You to.” 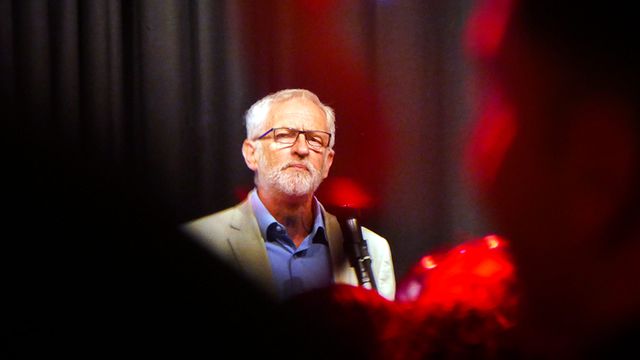 Newton Dunn cites extensively the group’s leader, ex-SAS officer Mark Bles, describing him as “an intelligence specialist who has spent much of his career tracing and analysing extremist groups.” Newton Dunn appreciatively referred to the group’s exposure of Corbyn’s “spider’s web of extensive contacts… from Marxist intellectuals to militant groups and illegal terror organisations.”

In their own statement, Hijacked Labour accuse Corbyn of connections with “a shocking mix of communists, Marxists, Stalinists, Trotskyites, anarchists, at home and abroad.”

Bles links Corbyn’s Labour to what he describes as “postmodern neo-Marxism in its various forms.” Newton Dunn eagerly reported Bles asking, “[H]ow can anyone believe Labour’s current election manifesto, if they promise anything to get into power?”

The level of implied threat involved is clear. The group say in their own “Not Labour” manifesto, “the Marxist radical left is intimately linked to Labour’s leadership and threatens the British way of life.”

The chart focuses on Shadow Chancellor John McDonell, Corbyn’s Communications Director Seumas Milne and Momentum campaign director Jon Lansman. The group claim Labour was hijacked in 2015, leaving “Her Majesty’s Official Opposition… in the hands of Marxists.” They were prompted to start researching the chart in 2017 “by Tory inactivity (and ignorance of the threat to the country).”

The project has unfolded against a background of increased physical attacks by the far right. In June 2016, during the last week of the divisive Brexit referendum campaign, Labour MP Jo Cox was murdered by fascist Thomas Mair. Stabbing and shooting the MP, Mair shouted, “Britain first!”

In 2017, as the chart was first being drawn up, neo-Nazi Jack Renshaw was plotting to murder Labour MP Rosie Cooper with a sword. That year Darren Osborne drove a van into a crowd outside Finsbury Park Mosque, killing one worshipper and injuring 12 others. In court, Osborne admitted planning to murder Corbyn and Labour Mayor of London Sadiq Khan.

In July 2018, Steve Hedley, assistant general secretary of the Rail, Maritime and Transport union, and his partner were attacked by fascists in a pub after a Stand Up to Racism demonstration.

In March this year, Corbyn was punched in the head by a far-right thug and Brexit supporter, John Murphy, at Finsbury Park Mosque’s Muslim Welfare House. Labour canvassers have been attacked by right-wing forces in the last fortnight.

In August, Guardian journalist Owen Jones was attacked by four men in a politically motivated assault. Jones is listed on the Hijacked Labour chart.

The Sun removed Newton Dunn’s article from its website within one day, citing unexplained legal reasons. This prompted Jones to tweet, “I was among hundreds of left wingers named in this map published by the Sun, whose sources included Nazis and anti-Semites. Many of us are under direct threat of violence from the far right.

“The author, @tnewtondunn, simply deleted it. There’s no apology. This is a scandal.” Hijacked Labour have also subsequently edited out citations from Aryan Unity and the Millennium Report.

This damage limitation exercise cannot conceal the fact that the Sun published an article based on fascist propaganda.

The targeting of the left as “dangerous” and “terrorists” is consistent with everything the newspaper has written since the day Corbyn became party leader with the backing of hundreds of thousands of Labour members and supporters—who responded enthusiastically to his professed opposition to austerity and war. A search of the Sun’s website brings up 420 articles mentioning the words “Marxist” and “Corbyn” and 432 mentioning the words “Marxist” and “Labour”.

Two days before Newton Dunn’s article, the Sun published a comment warning of the possibility of “a Marxist-led Government.” It has since editorialised about Corbyn as “the most dangerous man ever to stand for high office in Britain,” calling him “a mortal threat to our economy, jobs and security.”

Calling Wednesday for a vote for Johnson in the election, the Sun editorialised that it “has long considered Corbyn an unprecedented threat to our country” and that his defeat was necessary to stave off a “Marxist revolution.”

Publication by the Sun of Hijacked Labour is part of an authoritarian turn by the ruling class. The “patriotic” language invoking left-wing “traitors” to the “nation” echoes comments from security and military personnel who have been warning and planning for four years against any potential Corbyn government.

Almost as soon as Corbyn was elected Labour leader, in September 2015, a leading British general warned of “a mutiny” if he came to power: “The general staff would not allow a prime minister to jeopardise the security of this country and I think people would use whatever means possible, fair or foul to prevent that.”

Two weeks ago, former head of MI6 Richard Dearlove described Corbyn as “a present danger to our country,” saying, “Do not even think of handing this politician the keys to No 10.” Military figures like Colonel Tim Collins have warned that Britain would be “frozen out” of international security alliances under Corbyn.

This is in line with the declared aim of US Secretary of State Mike Pompeo to prevent Corbyn’s election. In June, Pompeo told the Conference of Presidents of Major American Jewish Organizations, “It could be that Mr Corbyn manages to run the gauntlet and get elected. It’s possible. You should know, we won’t wait for him to do those things to begin to push back. We will do our level best… It’s too risky and too important and too hard once it’s already happened.”

The venom reserved for Corbyn is ultimately directed against a leftward moving and resurgent working class, as is clear from the Sun’s railing against Marxism and revolution. In July, only days before Boris Johnson became Conservative prime minister, the government published a report branding large sections of the “left” in Britain as “extremist.” It warned of growing public sympathy for the left’s “revolutionary workerist ideas.”