The House of Representatives voted by a huge bipartisan majority, 377–48, to approve the largest US military spending bill in history, providing a record $738 billion for the US war machine.

US military spending will be highest since World War II, after adjusting for inflation, except for several years during the height of the Bush administration’s military intervention in Iraq and Afghanistan, when more than 200,000 US troops were engaged in combat operations. 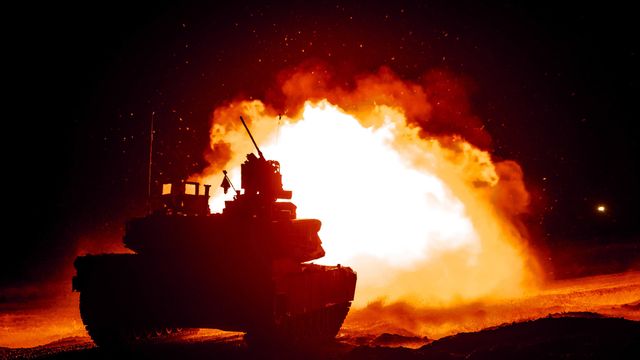 Only 41 Democrats voted against the bill, issuing pro forma criticisms of the gargantuan sum authorized for the military under conditions of deepening social crisis. But the entire Democratic leadership embraced the legislation, after a House-Senate conference on Monday in which equal numbers of Republicans and Democrats worked out the final provisions.

The “debate” on the House floor consisted largely of leading Democrats and Republicans from the Armed Services Committee praising each other, and especially Chairman Adam Smith (D-Washington), who introduced the legislation and served as its main advocate during the floor debate.

Smith acknowledged the bipartisan support for the bill. “Divided government” complicated the negotiations, he said, but “we do agree on a lot—90 to 95 percent.” House Majority Leader Steny Hoyer hailed the bill as a “compromise,” saying that this should not be considered a pejorative term, because “that’s what we do here.”

The only tension during the vote was whether more Democrats or more Republicans would give their approval. The Republicans narrowly prevailed, rubber-stamping the legislation by 189–6, while Democrats backed it 188–41. The lone independent, former Republican Justin Amash, opposed the bill.

The most important aspect of the legislation, besides the vast total sum authorized, was the stripping out of the bill of virtually every provision in the original House version that would have set limits on overseas military operations by the Trump administration.

The House-Senate conference removed a ban on US military support for the genocidal war by Saudi Arabia in Yemen, and a provision requiring that Trump obtain congressional approval before initiating any military operations against Iran.

The conferees also removed a measure that would repeal the 2002 Authorization for the Use of Military Force (AUMF), which gave congressional approval in advance to the Bush administration’s invasion of Iraq. The AUMF is still being used—long after the overthrow and execution of Saddam Hussein—as the legal pretext for other US military actions in the Middle East.

Another House-passed restriction that disappeared in the conference committee would have barred deployment of a low-yield, submarine-launched nuclear warhead that would mark a major step towards “usable” nuclear weapons in a war with Russia or China.

The NDAA does include two restrictions on possible Trump military actions—but both were introduced by Democrats as part of their attacks on Trump from the right, as insufficiently aggressive towards Russia and North Korea. The bill would bar Trump from withdrawing the United States from NATO. It also bars reducing the US military deployment in South Korea to below 28,500 without a certification from the Pentagon that such a decision was in the US “national interest.”

The legislation provides another $300 million in US military aid to Ukraine, on top of the more than $5 billion already spent since 2014 to turn the country into a base of operations against neighboring Russia.

The conference committee also removed a provision that would have forbidden the president to shift money from the military budget to finance construction of the wall along the US-Mexico border. Trump carried out this unconstitutional diversion from the fiscal 2019 budget after the end of a 35-day partial shutdown of the federal government over the refusal of Congress to approve the building of the wall.

The decision by the Democrats to accept the deletion of this provision only underscores the cynicism of their effort to impeach Trump for withholding congressionally appropriated military assistance to Ukraine. In the case of Ukraine, Trump’s withholding of $400 million to fuel the war between Ukraine and Russia is supposedly grounds for removal from office. In the case of the border wall, Trump’s diversion of a far larger sum to build a reactionary and anti-democratic monstrosity is simply dismissed as a detail in legislative horse-trading.

In perhaps the most publicized portion of the bill, the Democrats agreed to Trump’s proposal to create a sixth branch of the US military, a Space Force within the Air Force, similar to the position of the Marine Corps within the Navy. This is significant step toward the conversion of space into a battlefield between major powers. It was part of a deal in which Trump and the Republicans agreed to 12 weeks of paid parental leave for all federal government civilian workers.

The bill does not rescind Trump’s executive order banning transgender soldiers in the military, and it bars the closure of the US torture center and prison at Guantanamo Bay, Cuba.

The bulk of the bill, as the top-line number indicates, is endless spending for military buildup, including $71 billion for overseas operations (mainly Syria, Iraq, Afghanistan and drone warfare across the Middle East and North Africa), dozens more fighter jets and warships, and a 3.1 percent pay raise for uniformed military personnel, the largest in a decade, demanded by Trump as part of his effort to win favor with the military rank-and-file.

The pay raise is more than offset by the deteriorating conditions of life for ordinary soldiers and their families, which were indicated by a series of provisions in the bill: the enactment of a tenants’ bill of rights because of bad conditions in military housing; giving soldiers the right to compensation for medical malpractice in military hospital and treatment facilities; paid legal counsel for the growing number of victims of sexual assault and domestic violence.

The bill provides the financial basis for carrying out the strategy enunciated by the Pentagon in January 2018, when it shelved the pretext of the “war on terror” and declared that the central axis of US military planning was wars with other great powers, particularly Russia and China.

The litany of anti-Russia and anti-China provisions includes:

Dropped from the legislation were provisions setting standards for cleaning up toxic PFAS chemicals used in firefighting at Air Force bases and other military sites. There are at least 100 such sites in Michigan alone, and thousands across the country.

A coalition of 31 liberal and antiwar organizations issued a statement Tuesday calling the revised NDAA “a near complete capitulation” to the Pentagon and the Trump administration. “It is a blank check for endless wars, fuel for the further militarization of U.S. foreign policy, and a gift to Donald Trump,” the statement said.

Senator Bernie Sanders and Representative Ro Khanna issued a joint statement calling the revised NDAA “a bill of astonishing moral cowardice.” That rhetoric will not stop Sanders from seeking the presidential nomination of the party that rubber-stamped the NDAA by a margin of nearly 5–1.