Documents published by WikiLeaks on Saturday confirm that there is significant dissent within the Organisation for the Prohibition of Chemical Weapons (OPCW), the global chemical weapons watchdog, over the doctoring of a public report on the alleged April 7, 2018 chemical weapons attack in Douma, Syria, which reportedly killed 49 people and wounded as many as 650.

The latest round of revelations makes clear that the US-led regime-change operation in Syria, which began in 2011, has been based on a pack of lies. The role of WikiLeaks in exposing these lies demonstrates why the US government has been pursuing WikiLeaks founder Julian Assange so ferociously, along with Washington's partners in crime such as Britain and Australia.

Relying on video that showed alleged victims of the attack in a hospital gasping for air and foaming at the mouth, the Trump administration and its European allies launched missile strikes against Syria just one week later. The US-led attack was an act of war that threatened to spark a wider conflict with Russia and Iran, both of which have military forces deployed in the country to back the Assad government in the eight-year regime-change war fueled by the CIA.

While the Trump administration made no effort to seek independent confirmation of the allegations against Assad before taking military action, the OPCW report and the organization’s supposedly objective stance were used to justify the assault months after the fact. 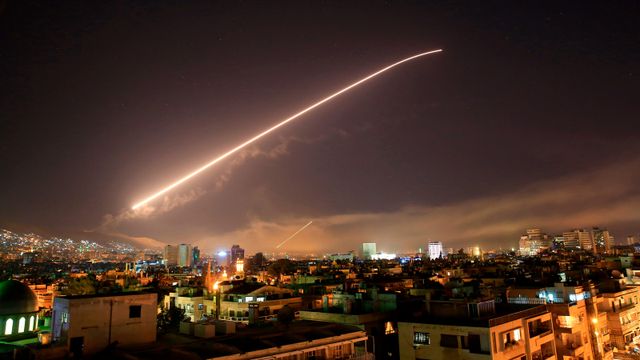 The U.S. launched an attack on Damascus, Syria on April 14, 2018. U.S. President Donald Trump announced airstrikes in retaliation for the country's alleged use of chemical weapons. (AP Photo/Hassan Ammar)

However, a series of internal OPCW files published by WikiLeaks, and reporting by columnist Peter Hitchens in the Daily Mail, show that serious concerns have been raised by members of the OPCW Fact Finding Mission (FFM) to Douma about evidence that was excluded from the final report in order to implicate Assad.

Relying on Islamist terrorist groups as “moderate rebel” proxies, including Al Qaeda and its affiliates, the US and its European allies have overseen a war that has resulted in the deaths of 570,000 people and displaced more than 12 million. The years of carnage have been aimed at overthrowing Syrian President Bashar al-Assad and installing a pliant Western puppet regime in order to neutralize the influence of Iran and Russia in the oil-rich Middle East. Claims of chemical weapons attacks and the use of “barrel bombs” by Syria’s military have been repeatedly used throughout the war in an effort to justify Western military action and call for the removal of Assad.

A memo sent to Fernando Arias, the director-general of the OPCW, on March 14, 2019 by a member of the FFM who had been sent to Douma to analyze the ballistics of two cylinders which were the purported source of the toxic gas, noted that there were about 20 inspectors who had expressed concerns over the final report published at the beginning of that month.

The author of the memo notes that members of the FFM felt that the report “did not reflect the views of the team members that deployed to Douma,” and that only one OPCW inspector who had been in Syria, a paramedic, was ultimately involved in the production of the final report. He notes that his investigation into the provenance of the cylinders, one which was found lying on a bed and another on an apartment rooftop, was excluded from the final report released in March.

WikiLeaks also published the first draft of the interim FFM report, which noted that the investigators were “unable to provide satisfactory explanations for the relatively moderate damage to the cylinders allegedly dropped from an unknown height, compared to the destruction caused to the rebar-reinforced roofs.” This fact--that the evidence did not point to the cylinders being dropped from Assad’s aircraft--was excluded from the final report.

An email exchange with the FFM’s team leader, Sami Barrek, from July 2018 showed that concerns had been raised by an investigator over the exclusion from the final report of the fact that only low levels of chlorinated organic chemicals (COCs) had been recovered at the scene, and that no determination had been made on how the cylinders arrived at the locations where they had been discovered. Despite repeated interventions by investigators, the level of COCs was excluded from the final report, allowing for the inference that a chlorine gas attack had been confirmed.

Another email sent by a dissenting investigator to OPCW Director of Strategy and Policy Veronika Stromsíková on May 20 raised concerns over the organization’s false declaration that veteran OPCW inspector and ballistics expert Ian Henderson, who had produced an engineering assessment, was not part of the FFM in Douma. The claim came after his report casting doubt on the possibility of the cylinders being dropped from the air was leaked to the press. Henderson had found, after inspecting the cylinders, that there was a “higher probability that both cylinders were manually placed… rather than being delivered from aircraft.”

As Hitchens notes in his reporting, the final redacted OPCW report omitted reservations raised by FFM investigators that the evidence they uncovered did not comport with the video of the alleged victims foaming at the mouth, a symptom consistent with a sarin gas attack and not chlorine.

Hitchens writes: “The inconsistency between the presence of a putative, chlorine-containing choking or blood agent on the one hand and the testimonies of alleged witnesses and symptoms observed from video footage and photographs, on the other, cannot be rationalised.” No evidence was found to indicate that sarin gas was used in Douma. This photo released by the Syrian official news agency SANA, shows medical staff treating a boy following a suspected chemical attack on his town of al-Khalidiya, in Aleppo, Syria, Saturday, Nov. 24, 2018. Some 50 civilians were being treated following a suspected poison gas attack by Syrian rebel groups on the government-held Aleppo city in the country's north, according to Syrian state media. (SANA via AP)

The latest round of leaks comes amid an effective media blackout of the publication at the end of November of an email written by a member of the OPCW fact-finding mission in Syria raising “grave concern” about the final redacted report. Those who have reported on the leaks and raised questions about the official narrative about the Douma attack have been smeared as Russian stooges or Assad apologists.

OPCW chief Fernando Arias confirmed that the email is legitimate, but stood by the final report during the organization’s annual conference in The Hague last month. “While some of these diverging views continue to circulate in certain public discussion forums, I would like to reiterate that I stand by the independent, professional conclusions,” Arais declared.

Last week, British-based Newsweek journalist Tareq Haddad resigned in protest after the magazine’s editors refused to publish his report on the OPCW leaks. After Haddad announced on Twitter his reasons for leaving the publication, a Newsweek spokesperson anonymously smeared the reporter, telling Fox News that he had “pitched a conspiracy theory rather than an idea for objective reporting.”

Despite the best efforts of the editors at Newsweek and the rest of the mainstream media to suppress any reporting, the continued revelations about the OPCW report make clear that there are very real grounds for journalists to raise concerns over the official line on the incident in Douma, which was very nearly used to trigger a third world war.

The April 2017 US cruise missile strikes on Syria

The 2013 alleged sarin gas attack in Syria: A pretext for war