On Tuesday, December 10, House Speaker Nancy Pelosi stood side-by-side with six Democratic committee chairmen as the House Judiciary Committee released the text of two articles of impeachment against President Donald Trump. One hour later, Pelosi stood in front of a different group of House Democrats to announce agreement with the Trump administration on the US-Mexico-Canada Agreement, Trump’s replacement for NAFTA.

On Wednesday, as the Judiciary Committee began its debate over the articles of impeachment, the full House voted by a massive bipartisan margin, 377–48, to approve the National Defense Authorization Act, which provides the Trump administration with record funding for the military, some $738 billion. The legislation removes most provisions to which the White House objected, including barring US military assistance to the Saudi war in Yemen and the deployment of a submarine-launched medium-range missile that would violate the INF treaty. It strips out a requirement for Trump to get congressional approval for military strikes on Iran. It also removes language that would have barred Trump from transferring funds from the Pentagon budget to build his border wall, as he did earlier this year.

On Thursday, as the Judiciary Committee debate over impeachment continued during the day, culminating in a party-line vote the next morning, a bipartisan group of House and Senate negotiators announced agreement on a $1.37 trillion measure to fund all 12 federal departments for the rest of the fiscal year—through September 30, 2020. On the key issue of the border wall, Democrats again caved, dropping any effort to use must-pass spending authorization legislation to block Trump’s orders to shift funding from the Pentagon budget to build the wall. 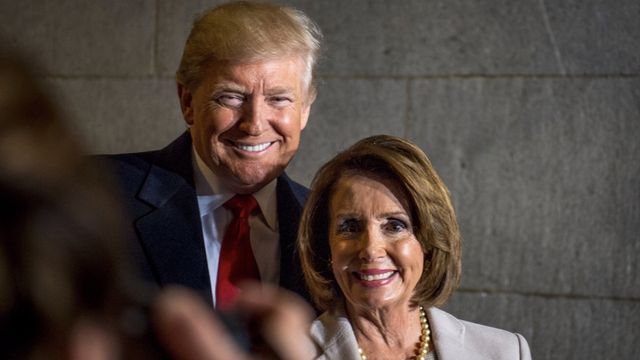 Next week will bring this extraordinary juxtaposition of impeachment and political collaboration to its climax. On Tuesday, the House and Senate are to take up and pass the omnibus spending package, perhaps in a series of smaller bills, after details are finalized over the weekend. On Wednesday, the House will vote to impeach Trump. On Thursday, the House is scheduled to vote its approval for the USMCA trade pact, Trump’s main legislative priority for this session of Congress.

What is one to make of the Democrats’ combination of threatening to remove the president from office and collaborating with him on his key political priorities, including trade war, attacks on immigrants, and a massive military build-up? At the very moment when they are impeaching Trump, the Democrats are demonstrating that they are in fundamental agreement with him.

The congressional collaboration with Trump makes nonsense of the apocalyptic rhetoric employed by the Democratic architects of impeachment. Judiciary Committee Chairman Jerrold Nadler, appearing on the ABC program “This Week” on Sunday morning, declared that impeachment was necessary because Trump poses a threat “to our democratic system itself. We cannot permit that to continue.”

“This is a crime in progress against the Constitution and against the American democracy,” he added. “We cannot take the risk that the next election will be corrupted through foreign interference solicited by the president, which he is clearly trying to do. It goes to the heart of our democracy.”

It is perfectly true that the Trump administration is engaged in a war against the democratic rights of the American people. But that is not what the Democrats are impeaching him for. There is no mention in their articles of impeachment of the separation of immigrant children and parents, or the unconstitutional building of a border wall, or Trump’s illegal ban on Muslim visitors, or his whipping up of racist and fascist forces to be used against immigrants and the working class as a whole.

The sole content of the impeachment campaign is that Trump has allegedly undermined the “national security” interests of American imperialism by withholding military aid that is being used to arm Ukraine to fight against Russia. His actions threatened to disrupt a longstanding CIA and State Department operation which led to the overthrow of an elected pro-Russian president and the installation of the current regime, which is backed by fascist and neo-Nazi elements.

The Democrats claim that Trump’s pressuring the Ukraine government to announce an investigation into Hunter Biden, son of the former vice president and current candidate for the Democratic presidential nomination, is a grave attack on the 2020 elections. This only represents an escalation, in a particularly hysterical form, of the “big lie” that Russia intervened massively into the 2016 elections and assured Trump’s election victory.

The truth is that it was the record of the Obama administration—the assault on living standards and jobs and the continuation of imperialist wars—and Hillary Clinton’s pledge to continue these policies that led millions of working people either to vote for Trump or stay away from the polls. If Trump wins again in 2020, it will not be because of Russia, Ukraine or any other foreign actor, but because the Democratic Party is just as committed to the defense of Wall Street and American imperialism as the Republican Party, while its emphasis on the politics of racial and gender identity alienates rather that attracts the support of the working class.

Moreover, as the inspector general’s report on the FBI released last week makes clear, the Democratic Party is allied with forces in the military-intelligence apparatus which are no less dangerous to the democratic rights of the American people than Trump.

It is no accident that one of the principal conclusions of the Democrats is the need for censorship of the internet and suppression of “fake news,” by which they mean any left-wing critique of American capitalism. The Democrats are peddling the McCarthy-style claim that anyone who points out the dire socioeconomic divisions and class injustices in America is doing the bidding of Moscow.

There is and can be no genuinely democratic content in a conflict between the CIA-backed Democrats and the fascistic Trump. The working class must reject both sides in this conflict within the ruling elite and intervene independently into the political crisis, advancing its own class interests through the building a new mass political party of the working class, based on a socialist and antiwar program.

No to American fascism! Build a mass movement to force Trump out!
[14 October 2019]