Many of the protests were led by university students angered both by the discriminatory Citizenship Amendment Act (CAA) and the police’s violent assault on students at Jamia Millia Islamic University (JMI), who have been in the forefront of anti-CAA protests in India’s capital, Delhi.

On Sunday, police illegally invaded the JMI campus, beating students with their lathis (truncheons) and spraying them with tear gas. In one widely shared video, five female students valiantly came to the defense of a male colleague who was being beaten by a half-dozen police, shielding him from lathi-blows with their bodies. 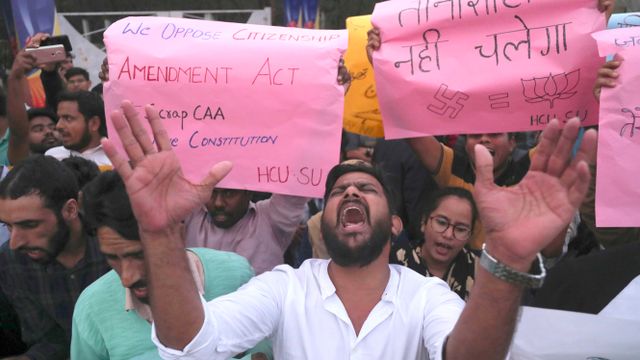 The university administration has condemned the “police brutality” and vowed to support the scores of students whom the police detained. The police “fired teargas shells at us, before they resorted to caning us ruthlessly,” 18-year-old JMI student Iman Usmani told the Guardian. “They did not even spare the girls,” added Usmani, one of more than fifty students who required treatment at a nearby hospital.

Also on Sunday, police stormed Aligarh Muslim University, 130km (80 miles) southeast of Delhi. Police justified the assault on the grounds that students had been mounting “illegal” anti-CAA protests. But the protests were only illegal because before even a single student had taken to the streets last Friday, local authorities, acting no doubt on the orders of the BJP-led Uttar Pradesh state government, invoked Section 144 of the Criminal Code, making all gatherings in Aligarh of more than four people illegal.

Yesterday there were protests at universities across the country from Kerala and Tamil Nadu in the south and Punjab and Delhi in the north, to Maharashtra in the west and West Bengal in the east. Institutions affected included Lucknow’s Nadwa College, Banaras Hindu University, Patna University, the Indian Institute of Technology in Kanpur, Jadavpur University in Kolkata, Pondicherry University, Chandigarh University, Chennai’s Loyola College, and Hyderabad’s Maulana Azad Urdu University. Students from Mumbai University and the Tata Institute of Social Science marched in the streets of India’s financial capital chanting “Shame on Delhi Police.”

In West Bengal, which is home to more than 25 million Muslims, much of the rail network has been shut down by the mass anti-CAA protests that erupted last weekend. Protesters have staged sit-ins on rail lines and roads. There have also been attacks on train stations and other acts of vandalism. The state government, led by the right-wing Bangla-regionalist Trinamool Congress (TMC), has ordered internet services suspended in four districts, including Howrah, which neighbors Kolkata, and parts of a fifth.

Yesterday TMC Chief Minister Mamata Banerjee led tens of thousands in a march against the CAA in Kolkata, and vowed to defy the BJP government if it makes good on its vow to order a National Register of Citizens (NRC), under which all of India’s 1.3 billion residents will have to prove to its satisfaction that they are Indian citizens. “For as long as I am alive,” Banerjee declared, “we will never implement the black law and the NRC here.”

As the developments in West Bengal indicate, diverse political forces are involved in the wave of anti-CAA protests. These include the Congress Party, till recently the Indian ruling elite’s preferred party of government, and its allies in the Stalinist-led Left Front.

However, the protests are clearly being animated by a popular groundswell. Among broad sections of the Indian population, the anger and outrage at the vile communal actions of Prime Minister Narendra Modi and his chief henchman, Home Minister Amit Shah—both of them lifelong members of the shadowy, fascistic Hindu supremacist RSS—is palpable.

Muslim students and youth have been in the forefront of the agitation against the CAA, which the BJP rammed through parliament and into law in just four days last week. But the protests have cut across religious, ethnic and caste lines. Hundreds of writers, intellectuals, and artists have signed statements condemning the law as discriminatory.

Among much of the population there is a growing recognition that India has reached the point of no return.

The CAA is the latest in a series of never-ending communalist provocations from the Modi government aimed at asserting India is first and foremost a “Hindu nation”—one in which Muslims are “tolerated,” but only in so far as they accept Hindu supremacy.

Under the CAA, all people—except Muslims—who migrated to India from Afghanistan, Pakistan and Bangladesh before 2015 are effectively granted automatic citizenship. Discriminatory as this is, it is merely meant to lay the groundwork for the BJP’s sinister plan to force all Indians to provide documents proving their citizenship. No matter that the majority of the population is condemned to live in poverty, almost 300 million adult Indians are functionally illiterate, and government services run the gamut from dilapidated to nonexistent.

In Assam, the only state yet to be subjected to the NRC, millions suffered psychological torment, financial hardship, and official abuse as they struggled to “prove” they are Indian citizens. When the “final” NRC was published last summer, 1.9 million people, or more than 5 percent of Assam’s 33 million residents, were excluded, rendering them “stateless.”

With the passage of the CAA and the BJP government’s oft-repeated vow to draw up an India-wide NRC by 2024, India’s Muslims are uniquely threatened with being declared stateless and subject to internment and expulsion if they are unable to “prove” their citizenship. While not even the BJP, as Amit Shah “generously” conceded last week, can make India “Muslim mukti (free),” Muslims know full well that the NRC will be used to intimidate, harass, and terrorize them. Shah, it should be noted, has repeatedly described Bangladeshi Muslim migrants as “termites” and vowed to drop them in the Bay of Bengal.

During Modi’s first five year-term in government, the BJP pressed forward with “pro-investor” reforms and dramatically expanded India’s anti-China alliance with Washington, while stoking Hindu communalism. Only after months of public outcry did Modi deign to criticize a wave of lynchings by Hindu nationalist vigilantes of poor Muslims and Dalits accused of eating beef or trafficking cattle.

Since being returned to power last May on the back of massive big business and corporate media support the BJP has accelerated its drive to transform India into a Hindu rashtra or state, and done so with the support of the Supreme Court and other key institutions of the Indian state .

On August 5, Modi, Shah, Indian President Ram Nath Kovind, yet another RSS cadre, and the top brass of India’s military-intelligence apparatus carried out a constitutional coup, illegally abrogating the special semi-autonomous status of India’s lone Muslim-majority state, Jammu and Kashmir. Subsequently, Jammu and Kashmir was bifurcated into two Union Territories, placing the region under permanent central government control. The assault on Kashmir has been enforced by mass repression, including the deployment of tens of thousands of additional security forces, the detention without charge of thousands, and a months-long suspension of cellphone and internet access.

In November, the Supreme Court bowed to the demands of the BJP and Hindu right and instructed the government to ensure that a temple to the Hindu god Lord Ram is built on the site of the razed Babri Masjid in Ayodhya. On December 6, 1992, in express defiance of India’s highest Court, Hindu nationalist activists incited by the top leaders of the BJP demolished the 16th century mosque. This precipitated the biggest wave of communal violence in India since the 1947 Partition of South Asia, into an expressly Muslim Pakistan and an overwhelmingly Hindu India.

India: a social powder keg with a lit fuse

The BJP’s reelection victory has no doubt emboldened it. However, the real driving force of its accelerated push for Hindu supremacism and turn toward authoritarian methods of rule is its fear of mounting social opposition, above all from an increasingly restless working class.

By whipping up anti-Muslim communalism, Modi and Shah are seeking to mobilize the BJP’s Hindu supremacist base as shock troops, and to channel the social tensions produced by rapacious social inequality and a rapidly deteriorating economy behind reaction, so as to intimidate and split the working class.

The BJP government has responded to the anti-CAA protests with repression and rabid communalist denunciations of the opposition. Yesterday, Modi, who as the state’s chief minister incited and presided over the 2002 anti-Muslim Gujarat pogrom, cynically tweeted that the “violent protests” against his government are “deeply distressing.”

The Supreme Court, predictably, sided with the government and its repression. Chief Justice S.A. Bobde said the court would refuse to even hear pleas relating to the police’s assault on JMI campus until the “violence” stops.

In India, as around the world, extreme right forces, backed by powerful sections of the bourgeoisie and the military-intelligence apparatus, have been able to exploit mass anger over the austerity, antidemocratic and militarist policies implemented by the liberal and “left” establishment parties.

The Stalinist parties—the Communist Party of India (Marxist) and Communist Party of India—their Left Front, and their union affiliates, respectively the CITU and AITUC, have systematically suppressed the class struggle. This included, in the name of “opposing the Hindu right” propping up a succession of governments, most of them Congress Party-led, from 1989 to 2008, that implemented neoliberal reform, massively expanded India’s military, and pursued closer ties to Washington.

Today, under conditions where there is burgeoning mass opposition to the BJP, the Stalinists point to the crimes of the Hindu supremacists only so as to shackle the working class to the Congress, a parade of right-wing caste-ist and ethno-regional chauvinist parties, and the putrefying institutions of the capitalist state. This includes promoting the Supreme Court as a bulwark of “democratic” India.

The Congress, likewise trumpeted by the Stalinists as a democratic-secular force, has a notorious record of conniving with the Hindu right, stretching back to the Partition and beyond. Last month, with the Stalinists’ support, it formed a coalition government in Maharashtra, India’s second most populous state, under the leadership of the Shiv Sena, a Hindu supremacist party that was long the BJP’s closest ally.

Workers and youth in India must learn the lessons of the 1930s. The bourgeoisie’s turn to ultra-nationalism, fascism and authoritarianism can only be combated through the independent political mobilization of the working class against the capitalist elite and all its political representatives and in the struggle for workers’ power.